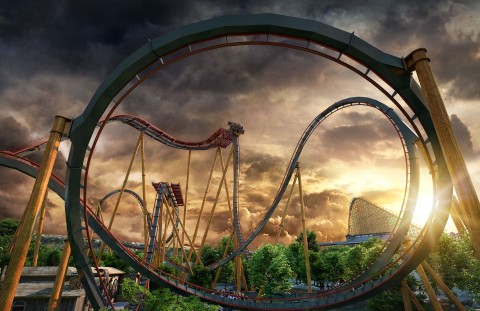 In late July, Six Flags Festa Texas unveiled their latest addition: Dr. Diabolical's Cliffhanger. If this Bolliger and Mabillard is anything like its fellow Dive Coaster models (SheiKra at Busch Gardens Tampa, Valravn at Cedar Point, Oblivion at Alton Towers), it will be a major crowdpleaser. Though these Dive Coasters are sort of one trick ponies, featuring up to two (around) ninety degree drops and the occasional large, sweeping element, parkgoers love them. There's something equally intimidating and inviting about that vertical drop and those open trains. Dive Coasters are incredibly comfortable as well, especially with B&M's newer vest restraints.

Dr. Diabolical's Cliffhanger has a maximum speed of 60 miles per hour and features two inversions in its ride layout: one Immelmann, an element that's come to be commonplace in Dive Coasters, and a 270 degree Zero-G Roll which leads into the ride's second drop. The ride also features a small airtime hill, a newer but popular element on B&M's Dive Coasters. While it's on the smaller side of the model at only 150 feet, Dr. Diabolical's Cliffhanger has been dubbed the "World's Steepest Dive Coaster," featuring a first drop of 95 degrees. Will the rider really feel those extra five degrees in their seat? Probably not. Are there steeper coasters outside the Bolliger and Mabillard chain? Absolutely. But words like record breaker and world's steepest will still get parkgoers and coaster enthusiasts excited for this shiny new-for-2022 coaster.

This ride has an impressively tight layout, nestled in the Screampunk District of the Texas park. Although the coaster unfortunately does not interact with Six Flags Fiesta Texas's iconic quarry wall, it will be eye candy in this section of the park.

Dr. Diabolical's Cliffhanger will doubtlessly draw crowds at Six Flags Fiesta Texas, a park that has steadily raised in the ranks of Six Flags parks. Apart from its beautiful scenery and prime location in San Antonio, Six Flags Fiesta Texas already has one of the strongest ride lineups in Six Flags's arsenal. Keep in mind, this is the only park in the world with two Rocky Mountain Construction coasters.

Dr. Diabolical's Cliffhanger will be a wonderful addition to the park, adding a coaster that looks good on the park horizon, but offers a more gentle ride experience compared to Iron Rattler down the midway. But in addition to its filling of a hole in Fiesta Texas's lineup, Dr. Diabolical's Cliffhanger will draw crowds, thus decreasing wait times on other attractions park wide.

Even if Dive Coasters aren't your thing, a new coaster is always good news. The dispersing of crowds and new revenue for this Six Flags park will continue to make Fiesta Texas a must-do on any enthusiast's list.

A Bolliger and Mabillard Comeback?

Perhaps the most interesting thing about this new coaster is the fact that it is the first Bolliger and Mabillard addition in a Six Flags park since X-Flight, a Wing Coaster at Six Flags Great America outside Chicago, Illinois which opened in 2012. In the coaster industry, relationships are built between parks and manufacturers, so a park will seldom purchase just one coaster from a specific manufacturer. Could this addition mean more new B&M coasters in the future of Six Flags parks? Perhaps Six Flags will beat SeaWorld to the punch in premiering B&M's long whispered-about Surf Coaster model.

Regardless of what this means for the future of Bolliger and Mabillard and Six Flags, Dr. Diabolical's Cliffhanger will prove itself a worthwhile addition to this San Antonio park.

The article heading asks an interesting question, but I think it could have been followed up with more context in the article itself.

Famously, Six Flags built a ton of huge coasters in the years between the mid-1990s and 2006. They then encountered very severe economic problems. In the years since 2007, few parks in the chain have received coasters on the scale that used to be completely commonplace. Some big wooden coasters were converted by RMC, when the company was an upstart who needed the publicity and experience more than it needed high-paying jobs, but otherwise Six Flags has been reluctant to invest in big custom coasters recently.

DDC, as we may call this new coaster because its full name is a real mouthful, is notable for several reasons. It is the third tallest full-circuit coaster Six Flags has built from the ground up since 2006, it is only the second B&M, and it's the first to feature a mid-course brake run. It is an unusually big and expensive coaster for the chain nowadays, in other words.

What I really wonder if whether Six Flags has saved up crumbs for years to afford this coaster, or whether they actually have access to funds nowadays to make more such investments. Is this an anomaly, or is Six Flags back?