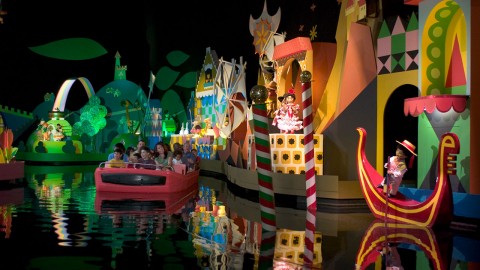 The Jungle Cruise is here, and that means our list of Ride-To-Film Adaptations has grown again! Let's face it – from The Haunted Mansion to Pirates of the Caribbean, many Disney films do lend themselves beautifully to becoming big screen adventures... even if the studio's had hits and misses in their ongoing attempts...

But today, we wanted to look at several rides that just should NOT become movies... but that doesn't mean they wouldn't still be great intellectual properties to develop multimedia around... Which of these five projects would you be interested in seeing? What ideas do you have for adapting rides into something other than big-screen movies?

Arguably, there are very few attractions as instantly-Disney as "it's a small world." First setting sail at the 1964 - 65 New York World's Fair, the ride's relocation to Disneyland has seen it become an iconic classic defined by its pastel simplicity, mid-century naievte, and of course, the song. We wouldn't put it past Disney to try to recraft the ride into one of its "over-produced CGI family adventure films," but there's a better use for it...!

How to use it instead: It's so easy to imagine "small world" as an equivalent to Nickelodeon's Dora the Explorer, offering formulaic, call-and-response adventures with viewers "visiting" countries around the world, "meeting" international friends, "learning" foreign languages, solving simple puzzles, and more, all keeping with the ride's message of harmony and difference as strength.

One of the lesser-known of Disney's ride-to-film adaptations was 2000's Mission to Mars, based on the motion-less simulator that occupied both Disneyland and Magic Kingdom. Mission: SPACE is kind of the modern equivalent. It's a kinda-sorta-recognizable ride name, but generic enough that screenwriters could take the bones of the in-park experience and create an actual story worth seeing in a theater.

It's also true that "science faction" or "Sci-Fi Lite" films set in space are a dime a dozen. Some – like The Martian and Interstellar are absolutely phenomenal. Those award-winning, esteem-earning films might make Disney think they ought to chase the genre, too. But we might offer there's a better space to fill...

How to use it instead: It's pretty easy to find a streaming series set in space. It's a little tougher to find a good one. Many of the streamers' sci-fi series are criticized for being weightless (pun intended) messes that toss every sci-fi trope into one bucket, served up in serial formats that just don't have much gravity (eh hem). A "Mission: SPACE" series written with real heart, drama, excitement, and science could be a hit on Disney+ or ABC. But given that Hulu cancelled 2018's very well-reviewed seriesThe First (a drama about the first manned mission to Mars), maybe we're asking for too much.