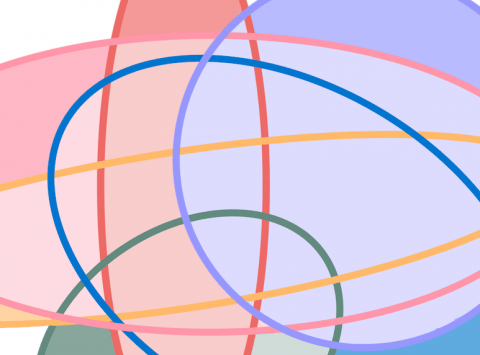 There’s nothing quite as distinctly Disney as the “Disneyland-style” theme park. Since Walt’s original magic kingdom opened in 1955, the tenets of a “Castle Park” have been written and rewritten, from Anaheim to Orlando; Tokyo to Paris; Hong Kong to Shanghai. It can be easy to lump those "Castle Parks" together, assuming that if you've been to one, you've pretty much been to them all. Sure, fans can explain how different the personalities and details of those "Castle Parks" are, but many people just want to know – at the end of the day, what makes each "Castle Park" special? What makes each worth visiting on its own? What does it have that no other "Castle Park" does?

Since including "hidden gems," walkthroughs, shows, nooks and crannies, and other non-ride "attractions" would be far too subjective, cumbersome, and ever-changing, we decided to compare each park's lineup with a metric we can define: rides. Based on the indisputible definition and list we created for each park in our Ride Count Countdown, we can quantitively and fairly compare the lineups of each "Castle Park."

I wanted to assemble a one-of-a-kind, by-the-numbers look at how the six "Disneyland-style" parks around the globe compare. The hand-drawn, six-way Venn diagram I came up with (below) took a whole lot of rearranging to get right, but the results show which rides are shared between "Castle Parks" and how... plus, which rides are exclusive to one "Castle Park" versus any others. (Note that some "exclusives" have earned asterisks – Magic Kingdom, for example, is the only "Castle Park" with the Little Mermaid dark ride, but another resort does have a copy at its "non-Castle Park." Get it?)

We’ll reveal each park’s exclusives one by one below, but if you’re as fascinated by this “Comparing Kingdoms” graphic as we are, you can purchase poster and canvas prints (or tees to give people behind you in line something to study) at my online art shop! 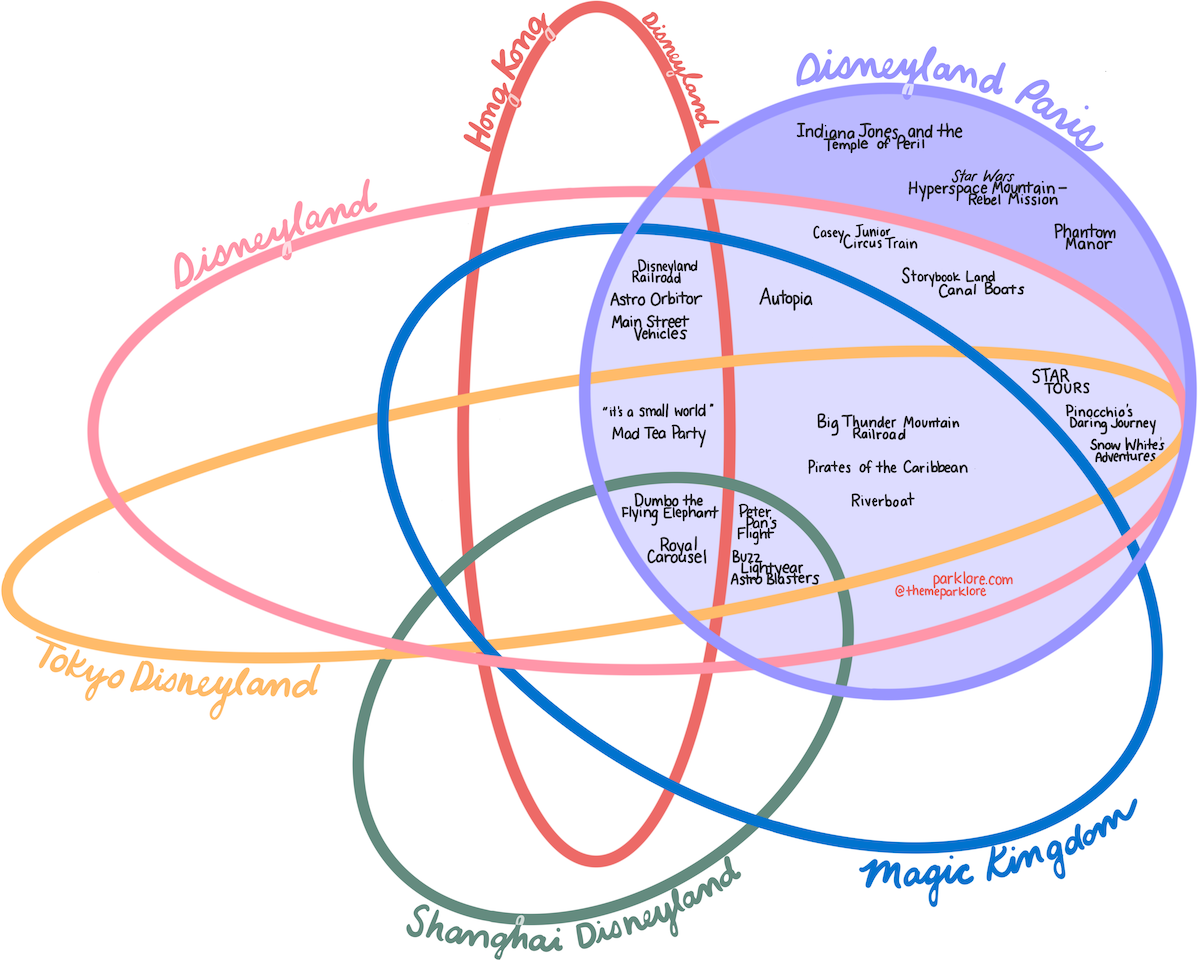 Disneyland Paris is pretty clearly the “red-headed stepchild” of Disney’s “Castle Parks.” Imagineers spent years designing a richly romantic, deeply detailed, and beautifully scaled park, only have it be outright rejected by the French. Disneyland Paris was plunged into a financial meltdown that lead to decades of closures, cop-outs, and cancellations across Imagineering. What’s worse, the resort’s second park – the Declassified Disaster: Walt Disney Studios – has absorbed nearly every dollar in capital expense since. Disneyland Paris’ newest from-scratch E-Ticket opened nearly thirty years ago.

As a result of being in suspended animation, Disneyland Paris has the fewest exclusive rides of any “Castle Park’s” collection – and two of them are technically variants of stateside classics (though we argue that both the park’s Haunted Mansion and Space Mountain spinoffs are different enough from their American counterparts to count as something else entirely).

What’s also interesting is to see what rides Disneyland Paris does not share with other “Castle Parks.” The swapped placements of Frontierland and Adventureland mean the park has no Tom Sawyer Island and no Jungle Cruise. Its cooler weather kept Splash Mountain out. And since it’s been essentially unchanged since 1995, it missed the Winnie the Pooh bandwagon – the only “Castle Park” without a Pooh dark ride!

Must-See Exclusive: Depending on your thrill tolerance, either of the park’s two “reimagined” classics will do. The Modern Marvel: Phantom Manor is an operatic experiment that repurposes the bones of the Haunted Mansion as something new. The genuinely-eerie ride replaces dancing ghosts with decaying corpses and singalongs with saloons. Though rethemed with Star Wars, the core of the Lost Legend: Space Mountain – De la Terre á la Lune still provides an experience unlike any other – a launched Space Mountain that flips guests upside down three times. 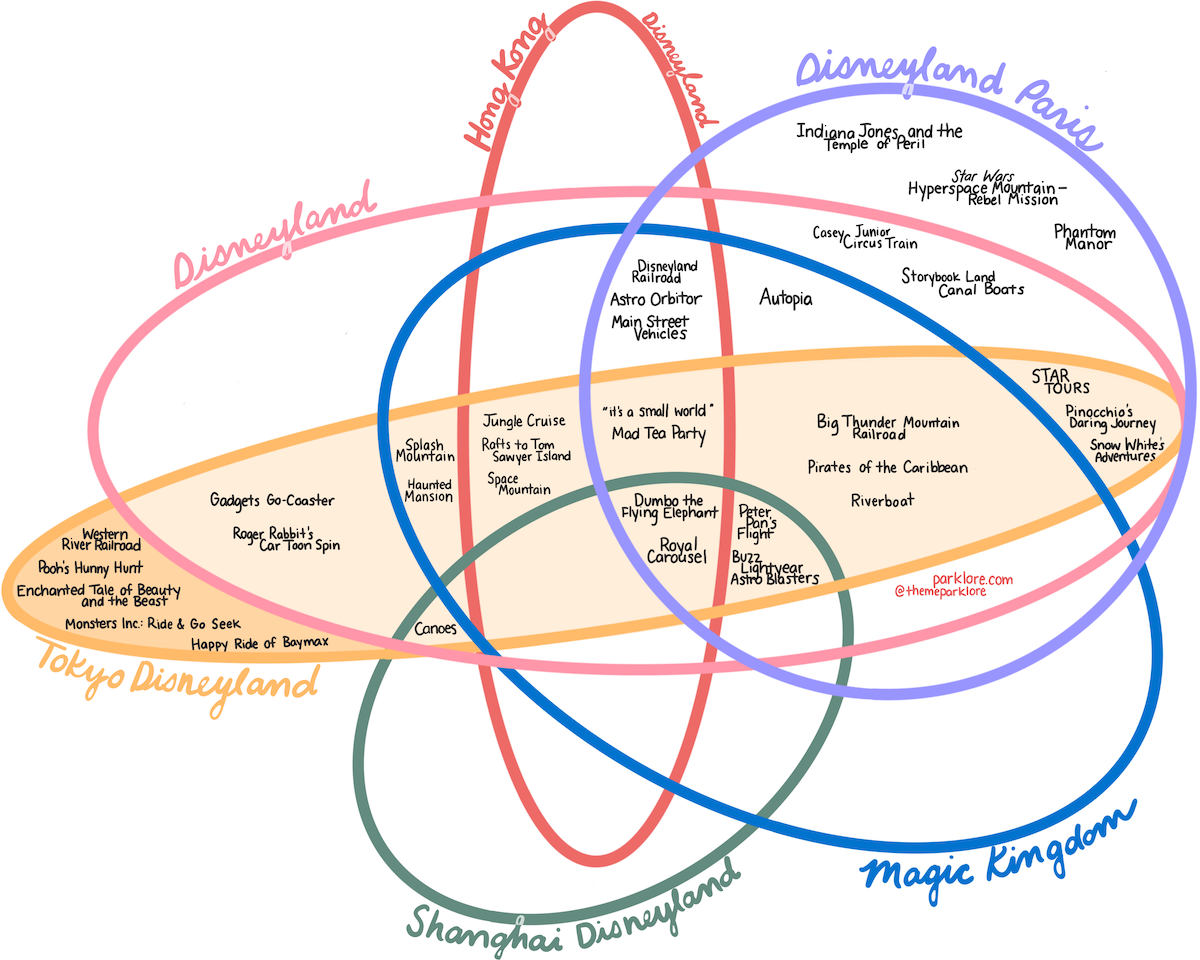 Interestingly, Tokyo Disneyland’s three standout “exclusives” are three massively popular dark rides. Monsters Inc.: Ride & Go Seek may be an odd fit for Tomorrowland, but the interactive dark ride is absolutely sensational. Enchanted Tale of Beauty and the Beast is the park’s newest attraction. While it finally gives Beauty and the Beast a long overdue dark ride, reviews have been mixed given that the attraction is basically a new genre of "singalong" attraction.

One very interesting component of Tokyo’s “exclusive” ride collection is the Western River Railroad, which departs from a station above the Jungle Cruise boathouse, circles Adventureland and Frontierland, passes through the Primeval World, then returns. This “replacement” for the Disneyland Railroad was allegedly concieved because, due to Japanese transit regulation, a “traditional” Railroad encircling the park and stopping a various stations would require a timetable and ticketing, just like the resort’s Monorail.

Must-See Exclusive: Far and away, the park’s main draw for foreigners is Pooh’s Hunny Hunt. The first of Disney’s trackless dark rides, the ride holds up even two decades later as one of Disney’s best. Even if it’s hard for stateside fans to believe that Tokyo’s Pooh ride is a genuine E-Ticket, Hunny Hunt will make anyone a believer. 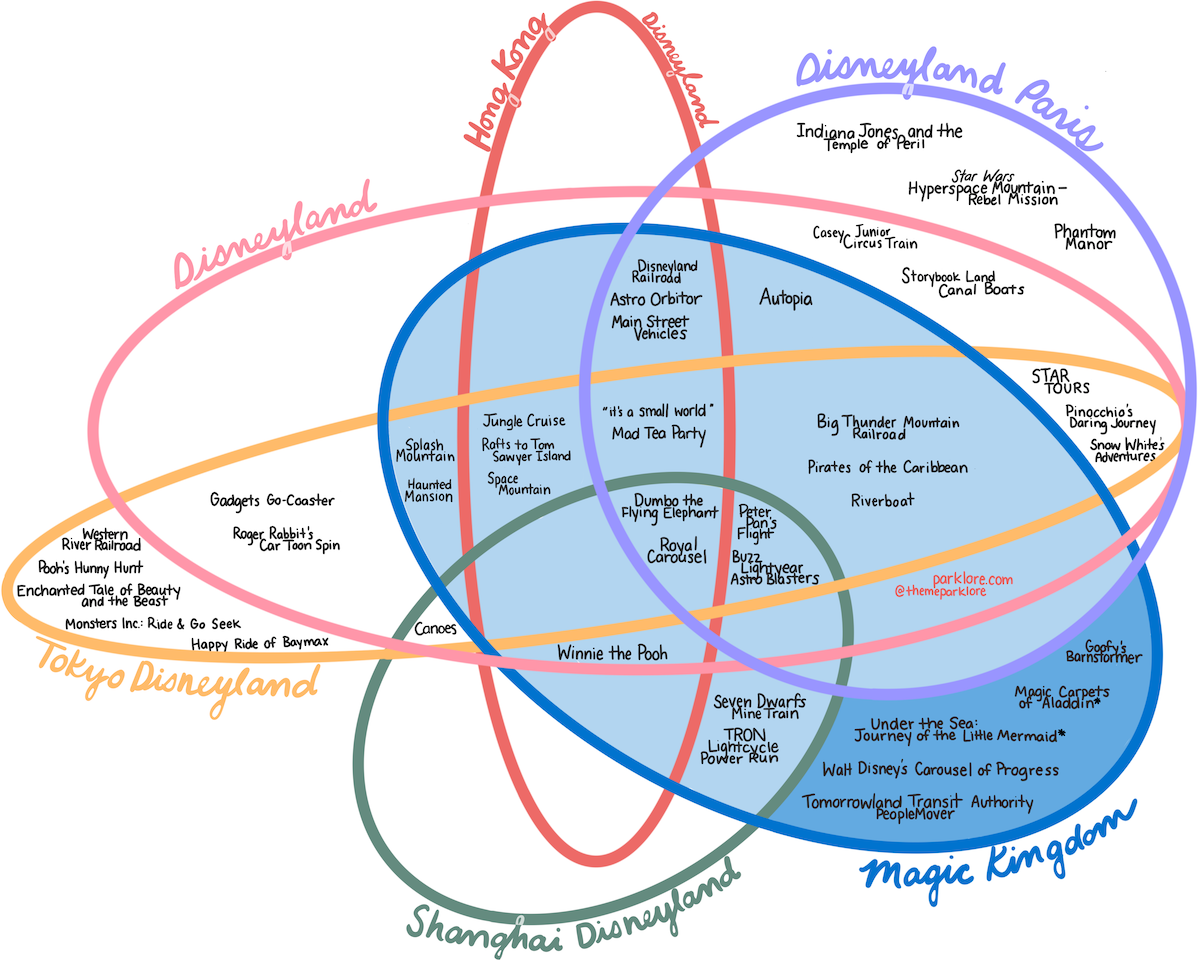 It makes some amount of sense. Magic Kingdom was quite literally “Disneyland East.” Additions and subtractions during the translation from California to Florida were relatively few in terms of rides, and just about every headlining addition to the park since (like Space Mountain, Big Thunder Mountain, and Splash Mountain) has come to Magic Kingdom only when rolling out to multiple “Castle Parks.” It’s even happened this decade, when Seven Dwarfs Mine Train ceased being exclusive to Florida’s “Castle Park” thanks to Shanghai. (On the other hand, Disney World’s clone of TRON Lightcycle Run pulled the ride out of Shanghai’s exclusives, too.)

And yes, I can already hear readers shouting, “But Disney World has a ton of exclusive stuff when you add in the rides at the other three parks!” You’re right! It does! But comparing Castle Park to Castle Park is an interesting measure, and maybe a new way of seeing how these particular parks stack up. Because sure, Walt Disney World as a whole has a lot of exclusives… but maybe seeing what only Magic Kingdom has among Castle Parks tells a story, too, and helps explain why some Disneyland regulars opt to skip the park entirely.

Must-See Exclusive: Whereas every other resort’s “must-try” is some exclusive, blockbuster, showstopping E-Ticket, Magic Kingdom’s list of exclusives lends itself more toward nostalgia. Given that Disneyland’s Lost Legend: The PeopleMover closed decades ago and remains rotting in plain sight, Disney World’s version of the continuously-moving aerial highway is an absolute delight.

Likewise, the Modern Marvel: Carousel of Progress just a few steps away is literally a landmark of Imagineering. Walt Disney allegedly named the Audio-Animatronics show his personal favorite and decreed that it should never cease operation. Just to be safe, consider it a “must-see.”