TPT REPORT CARD: How Well Is Each Disney Park Living Up To Its Opening Day Dedication? 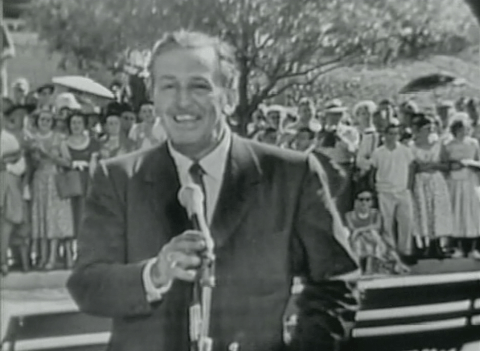 On July 17, 1955, the world looked on in wonder as Walt Disney addressed the nation live from the opening of Disneyland. Walt's keen understanding of media had seen him leverage the still-new art of television to provide glimpses into the park throughout its construction, but on that day, everything changed. With one opportunity to make a first impression – and to introduce the entire country to his finished park – Walt stood before the cameras and recited his dedication for Disneyland: "To all who come to this happy place: welcome..."

In that tradition, every Disney Park since has been opened with a dedication – a ceremonial speech that poetically captures everything from the park's identity to its ideals; what it is and what it aspires to be and mean. It's appropriate that each park's dedication is typically engraved in bronze at or near the park's entrance, because they really are time capsules – plans delivered for each park at the moment of its opening. And as we know, sometimes a park's identity changes. Today, we'll compare each U.S. Disney Park's current state to the dedication presented at its opening and "grade" how well each is doing at living up to its Opening Day hopes... Do you agree with our grades? Let us know in the comments below!

DEDICATION: To all who come to this happy place: Welcome. Disneyland is your land. Here age relives fond memories of the past, and here youth may savor the challenge and promise of the future. Disneyland is dedicated to the ideals, the dreams, and the hard facts that have created America, with the hope that it will be a source of joy and inspiration to all the world.

OUR THOUGHTS: The first line of Disneyland's dedication is among the most well-known quotes from Walt Disney's lifetime: a simple and succinct invitation for visitors to his little "magic kingdom" where "parents and their children could have fun together." That lovely ease and simplicity is Disneyland's backbone. But is it still a place where "age relives fond memories of the past" and where youth "may savor the challenge and promise of the future"?

When Disneyland was dedicated in 1955, its Main Street represented a world fifty years gone, but one fondly remembered and idealized by members of Walt's generation. Today, no one is alive who would remember Main Street's turn-of-the-century setting. (If a Main Street were built today with the same "throwback" time gap, it would be set in the 1970s.) Likewise, few would argue that Tomorrowland offers any chance for young people to "savor the challenge and promise of the future" unless Space Rangers, Finding Nemo, and a galaxy "long, long ago" offer a glimpse into tomorrow. Even Walt's quasi-educational Adventureland and Frontierland with their "hard facts that have created America" just really aren't for that anymore.

But if Disneyland's purpose is to be a source of joy and inspiration to all the world, it succeeds. The park is a charming little time capsule of mid-century optimism, which has gradually gained pop culture embellishments and enhancements and redesigns over 65+ years, but its many parts all feel like one cohesive whole. The spirit of Walt's dedication is still alive and well even if the finer points have evolved.

DEDICATION: Walt Disney World is a tribute to the philosophy and life of Walter Elias Disney... and to the talents, the dedication, and the loyalty of the entire Disney organization that made Walt Disney's dream come true. May Walt Disney World bring Joy and Inspiration and New Knowledge to all who come to this happy place ... a Magic Kingdom where the young at heart of all ages can laugh and play and learn together.

OUR THOUGHTS: The dedication delivered at Magic Kingdom's opening really represents the debut of the much larger Walt Disney World project, but it's worth looking at Roy Disney's words to see how they hold up fifty years later anyway.

Though he'd passed away nearly five years before it debuted, the "Florida Project" really was a tribute to Walt's life and legacy – hence Roy's insistance that the property would be called Walt Disney World, forever cementing his brother's name. It's hard to judge the Walt Disney World of 2021 on how well it stands as a tribute to "the philosophy and life" of Walt, because frankly, it's pretty hard to imagine what Walt would be excited about in 2021. (Before his death, he'd largely "graduated" from theme parks to bigger ideas about urban design, corporate partnership, and progress.)

Does Walt Disney World bring Joy, Inspiration, and New Knowledge to visitors? We'd say, yes, yes, and... kinda. But as to the specific dedication for Magic Kingdom – that it be a "happy place" where "the young at heart of all ages can laugh and play and learn together"? Tick. As an excellent  "operationalization" of the Disneyland model, Magic Kingdom adds efficiency and capacity to the "Castle Park" formula while maintaining that intergenerational delight that's made it a global destination for half a century.

DEDICATION: To all who come to this place of joy, hope and friendship, welcome. Epcot is inspired by Walt Disney's creative vision. Here, human achievements are celebrated through imagination, wonders of enterprise and concepts of a future that promises new and exciting benefits for all. May EPCOT Center entertain, inform and inspire and above all, may it instill a new sense of belief and pride in man's ability to shape a world that offers hope to people everywhere.

OUR THOUGHTS: As most Disney Parks fans are well aware, E.P.C.O.T. was Walt's dream project: a legitimate, from-scratch, city-of-the-future whose corporate sponsorship, prototype transportation systems, and master-planned efficiency were meant to be a blueprint for global cities to emulate; literally, a completely new model for urban design that would change American life forever. To that end, it's a bit of a stretch to say that EPCOT Center – much less the Epcot we know today – was "inspired by Walt Disney's creative vision."

But by mixing Walt's optimistic futurism with an operable theme park model the company had never tried before – a "permanent World's Fair" with embedded corporate sponsorships – EPCOT Center did offer a glimpse into the "wonders of enterprise and concepts of a future that promise new and exciting benefits for all." Its World Showcase and Future World realms were two halves of the story of humanity: who we are, and what we can be. Lofty, ambitious, intellectual, and expensive, the park got so much right. Disney Legend Tony Baxter concisely said that if Magic Kingdom makes magic real, then EPCOT made reality magical. Just ask its first guests, who still remember it as not just informative, but transformative. As a dozen EPCOT Center Lost Legends will tell you, that was a long, long time ago.

Glimmers of the park's ability to convince you that humans can "shape a world that offers hope to people everywhere" can still be spotted if you know where to look, but requisite character invasions, piecemeal design solutions, and patchwork identities keep today's Epcot mired in a murkey mess. A much-needed, all-at-once stylistic upgrade to the park's northern half if meant to at least reunite the pavilions aesthetically. (As to whether that'll suddenly make Finding Nemo, Guardians of the Galaxy, Mission: SPACE, Test Track, Soarin', and mirror dimension Figment "gel" into a cohesive whole... Well...) Our guess is that when that multi-year, multi-step redesign is complete, it'll come with a "Grand Reopening" and – more than likely – a new dedication.

Now on to Disney's more recent parks... Read on...