Knott's Bear-y Tales: From A Southern California Classic to the Berry-Blasting Return to the Fair 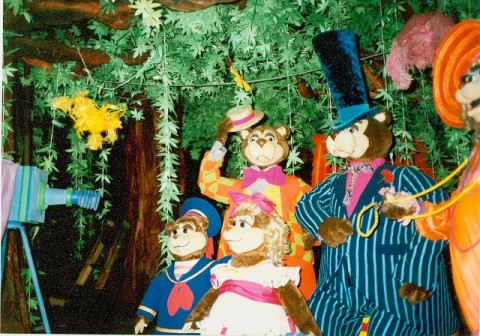 Welcome one and all! Y’all come have a ball! Things are very fine, riding on the ole’ Knott’s Bear-y line!” It’s not every day that an attraction manages to truly capture a generation. It’s even rarer that one of those good, old-fashioned family attractions becomes so legendary, its story outlives its lifetime. Yet today, we’re inducting just such a ride into Theme Park Tourist’s library of Lost Legends.

And while those ingredients may sound like the making of a perfect Disneyland dark ride, Knott’s Bear-y Tales wasn’t a Disney dark ride at all, but an anchor attraction that could only be found at Knott’s Berry Farm, mere blocks from Disneyland in Buena Park, California. How did one of Disney’s most esteemed Imagineers create an attraction that became a Southern Californian treasure? And how has the concept made a miraculous return? Well, let’s just say… it’s kind of a cute story…

Disneyland may indeed be the place where the “rules” of the modern theme park were born in master-planned form. But make no mistake – Walt Disney knew exactly who he was taking his cue from: Walter Knott.

Technically, Knott’s Berry Farm traces its history to 1920, when Walter and his wife Cordelia drove their Model T Ford to Buena Park, California, renting real estate to restart their lives as farmers. By 1927, they’d built a home and berry stand on the land, plus a Tea Room for Cordelia to sell sandwiches, jams, and homemade pies baked fresh with the farm’s berries.

In 1934, Cordelia decided to weather the Great Depression by using the farm’s bounty to open her Tea Room up for full-service dinners. Mrs. Knott’s fabled fried chicken dinners came complete with salad with rhubarb, biscuits, vegetables, mashed potatoes with gravy, and berry pie for dessert, all for 65¢. In a matter of years, the 20-seat Tea Room became a 350-seat Restaurant with multi-hour waits each evening…

Walter began building a historic 1860s Western mining town – one shop at a time – in 1940 merely as a way to entertain crowds waiting for a table! By the middle of the decade, however, Knott’s “Ghost Town” was an attraction in its own right. In 1947, the Knotts officially established “Knott’s Berry Farm” as a roadside attraction, where guests could buy souvenirs, pan for gold, indulge in chicken dinner, and taste the legendary “boysenberry” cultivated by Knott and fellow farmer Rudolph Boysen of a little rural neighborhood a few miles south called Anaheim.

Knott’s Berry Farm bills itself as “America’s First Theme Park,” and it’s easy to agree. When Walt Disney arrived in town in the 1950s, Knott’s Berry Farm was already a destination! More to the point, Walt often spoke with Walter Knott about his park’s capacity, traffic flow, pricing, and more, all in an effort to refine the “Magic Kingdom” being built down the road.

Everything changed at Knott’s Berry Farm with the arrival of Bud Hurlbut in 1960, whose handshake deal with Knott lead to the construction of two pivotal attractions (and two of the most magnificent classic dark rides in the industry): the Calico Mine Ride and Log Flume – each quite literally an inspiration to Walt Disney, leading directly to his own Mine Train Thru Nature’s Wonderland (and the idea of a hidden switchback queue).

So you can imagine that even if Disneyland is given due credit for being the first master-planned, intentional theme park, Knott’s was undoubtedly its progenitor. Especially in those early days of the 1950s and ’60s when both Disneyland Knott’s Berry Farm were growing thanks to the talents of the first generation of artists-turned-attraction-designers, everyone was learning as they went.

Pencils and paperclips are to thank for Rolly Crump’s career at Walt Disney Imagineering. Initially an animator at the studio (on films like Peter Pan, Lady and the Tramp, Sleeping Beauty, and One Hundred and One Dalmations), Crump was what you might call a tinkerer. He’d use simple office supplies to create kinetic sculptures, filling his room at the studio with paperclip-powered propellors that would spin in the breeze from the air conditioner.

Crump was convinced to install his spinning supply sculptures in the Studio’s library, where Walt stumbled across them. So like so many animators at Walt Disney Studios, Rolly was quickly called over to WED Enterprises to lend his distinctive style to the nascent Disneyland. Crump said in his 2012 autobiography It’s Kind of a Cute Story, “When I finally worked for Walt, I think it was the propellers that made him want to hire me. I think he liked my imagination.”

It’s appropriate too that one of Crump’s most instantly-iconic contributions to Imagineering is a project that never actually came to Disneyland – his Tower of the Four Winds that stood as the icon and marquee of “it’s a small world” when it debuted at the 1964 – 65 New York World’s Fair. The nimble, kinetic, beautifully modern sculpture of spinning umbrellas, rotating flags, and revolving flowers was simply too large to ship back to Anaheim with the rest of the ride. (Instead, it was left in place, and eventually demolished to be sold for scrap.)

Of course, Crump did design its spiritual successor – the iconic, Mary-Blair-inspired clocktower, glockenspiel, and geometric facade that serve as the ride’s exterior in California, Tokyo, Paris, and Hong Kong. Surely, one of his most enduring and recognizable projects for the company, the “small world” facade also perfectly captures Crump’s distinct understanding of motion, shape, and joyful whimsy through architecture.

Even still, Rolly’s touch can be sensed all around Disneyland. He designed, sculpted, and hand-painted most of the tikis in the lanai garden of the Modern Marvel: The Enchanted Tiki Room. (Rolly told his hometown paper, the Fallbrook Village News, that it was his idea to dangle “Sparkletts” in the eyes of the tiki drummers in the show so their eyes would glisten as they drummed.) He was also a leading designer behind Tomorrowland 1967 – Walt's "World on the Move."

Back when the jury was still out on what, exactly, the Haunted Mansion ought to contain, Crump’s concept was a “Museum of the Weird,” packed with otherworldly oddities, international wonders, eclectic designs, paranormal sights, strange creatures, palm-readers and vardo wagons (above), and living antiques – elements of which still live on in the Mansion’s final form. But unlike his contemporaries – Marc Davis and Claude Coats, for example – who’d spend their careers with Disney, Crump was ready to move on... and we bet you can guess where he went...