Back in Pittsburgh, Kennywood had certainly become a more modern park of amusements and thrills over the course of the 1920s! The opening of a number of historic John Miller coasters – 1920's Jack Rabbit, 1924's Pippin (now Thunderbolt), and 1927's mobius Racer – had made the park look more like its modern self. So had 1930's Laff in the Dark – a classic, twisting dark ride through the "funnies" built in an enclosed bumper car shed (left). (The Old Mill, you'll remember, was already thirty years old by that point!)

As the story goes, plans to add a Noah's Ark to the park had been a foregone conclusion... until the 1929 Wall Street Crash and the ensuing Great Depression slowed the park's plans. In retrospect, it's probably for the best. Frankly, the Ark wasn't as needed then as it soon would be...

On March 17 and 18th of 1936, a catastrophic flood swept through all of Pittsburgh. Over the course of the two days, the "Great St. Patrick's Day Flood" saw water levels swell to 49 feet – nearly double the 25 feet that would indicate flood conditions. Over 100,000 buildings were destroyed. Damage to the city's riverside steel mills left 60,000 citizens out of work. Pittsburgh was without power for 8 days, and 69 people were reported dead from the catastrophe.

Aside from the irony of a devestating flood delaying the construction of Kennywood's biblical Ark ("The recent flood hindered me from getting my ark ready for today, but we shall sail soon!" said a construction sign), it's easy to imagine that Kennywood and its funhouse were a rare respite for the weary Pittsburghers whose lives had been upended that spring... Perhaps moreso than ever, once the flood waters receded into the Three Rivers, Noah's Ark was needed.

Finally, in the summer of 1936 – and at a total cost of $20,000 (the equivalent of about $400,000 today) – Kennywood became home to the last-known Ark to be constructed, and certainly the final Philadelphia Toboggan Company version of the attraction.

While climbing through the rocky base of Mount Ararat and along steps and boardwalks leading to the shipwrecked Ark, guests would encounter their first of its many gags. Hidden air hoses slyly activated by attendants would blast streams of air upward when crossed by young ladies, sending their skirts flying (and delighting crowds who gathered below to catch a glimpse).

To reach the ark itself, guests would need to navigate "wobbling lilly pads" across a pool of water on the mountainside. Stepping across those anchored, floating platforms that would leave visitors young and old slipping into the ankle-deep reservoir there. Knocking floors, sirens, and surprise airhorns would likewise startle guests, leaving spectators in stitches.

But perhaps that attraction's greatest gag was the ship itself... The entire Ark was built atop a rocking mechanism, like a pendulum swinging deep in the mountainous base. Guests standing atop the stairs at the ship's threshold would hop aboard as it bobbed on invisible waves, navigating through the ship's interior as it alternatively raised and lowered. 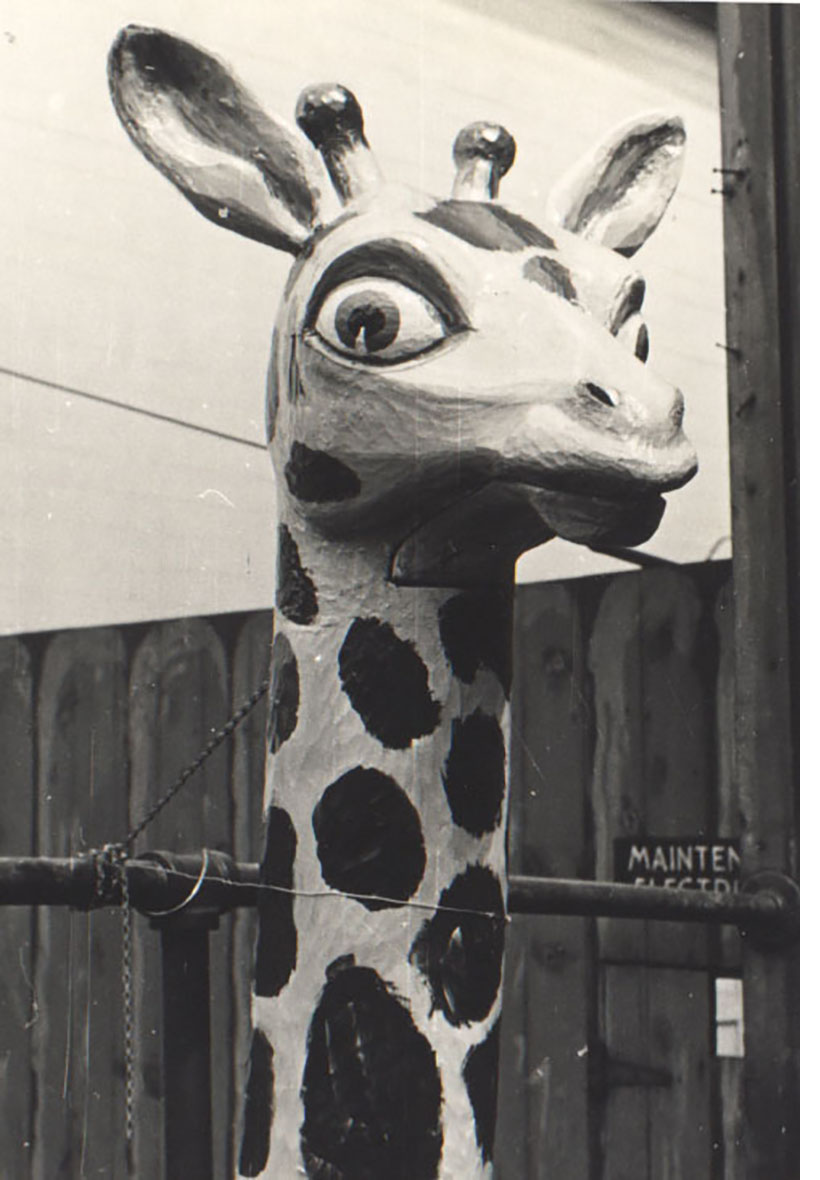 On its upper decks, they'd pass animals hand-carved by cartoon scenes and motion-based funhouse gags (like a tower of "falling barrels," loudly toppling toward startled guests with each rock of the ship) before descending down dark, narrow stairs that likewise leaned forward and back with the ship's movement. Even once deep inside the "mountain" structure itself, guests would find themselves in a maze of vibrating floors, rumbling walkways, and oscillating path panels filled with ghostly figures and skeletons.

Characteristic of any classic attraction that's seen the better part of a century, Noah's Ark changed in the context of the world around it! According to the LA Times, for example, during World War II the tilting ship would cause a coffin to fall open over guests' heads, containing the crudely-crafted corpse of Adolf Hitler; in the 1950s, a TV antenna was added atop the ark – apparently even Noah had fallen for the new fad of television – and in 1960s, a parade of animals including the Peanuts' Snoopy ringed around the Ark on a motorized track.

By far the Ark's most iconic makeover took place in 1969. As part of a major reconstruction effort, the path to the Ark was rerouted, the gags reimagined, and Noah's cast of creatures gained its most fabled occupant: a full-sized blue whale whose famously squishy tongue served as its entry way. Though plucked more from the Bible story of Jonah than Noah, the spouting whale served as a beloved marquee for the attraction for nearly thirty years... Until...

Raiders of the Lost Ark

As the New Millennium neared, just three Arks remained – two in the UK (Blackpool Pleasure Beach and Frontierland) and a single US installation... Kennywood's. “Rides like these – the funhouses – you’ll find that they need a refreshing about every 20, 25 years to not get totally stale,” Kennywood spokesperson Nick Paradise told the Pittsburgh Post Gazette in 2015.

In 1996, that quarter-century upgrade turned the Ark into a construction site as a massive restoration and reimagining overtook Mount Ararat. Reportedly, upon "digging into" the Ark, engineers conceded that the ship's internal wood was too rotted to salvage. What might've spelled the end of the then-60-year-old attraction at any park instead lead Kennywood to a an extensive, nearly from-scratch rebuild of the teetering boat.

The complete reconstruction of the Ark also offered the rare opportunity for a pop culture upgrade. Noah's Ark largely dropped its whimsical mid-century style and the comical animals that came with it. Over the 1995 - 1996 off-season, the blue whale that had been an icon of Noah's Ark – and by extension, Kennywood's classic attraction lineup – for thirty years was put out to sea. Is it any surprise that in the era of the Modern Marvel: Indiana Jones Adventure, the Ark was rewritten with a more adventurous edge?

Guests were recast as would-be archaeologists who'd come to explore the recently-recovered resting place of the Ark. With the squishy-tongued whale gone, the attraction switched to a batched entry, with groups of guests loaded into a freight elevator meant to whisk them up to the ship's remains. With excavation lights flickering (and thanks to a rocky scrim on rollers), the elevator would appear to lose power of plummet (actually rotating on a turntable), depositing guests into caverns deep inside Mount Ararat.

Once there, a clever illusion would see guests face (Plexiglass-covered) pits of petrified skeletons, seemingly crossable only by tip-toeing across a narrow wooden beam or hopping across pillars. Even once guests reached the mount's summit, the Ark was refilled with new gags, including filling its lower levels with all manner of creepy creatures (like snakes that spat at approaching guests) and a dizzying, dimensional, revolving Ark illusion. The attraction's end was also reimagined as a "bathysphere," where guests would again gather to see a mini special-effects show wherein the walls would collapse inward, pouring water into the chamber.

Make no mistake: for a generation of '90s kids, this Noah's Ark was the Noah's Ark – more a test of bravery than a whale of a good time. But kids who'd grown up with the "classic" Noah's Ark now watched their own children cowered through the funhouse-turned-fearhouse, sapped of its color, comedy, and mid-century joy. From the "Elevator of Doom" to the terrifying tombs; jumpscare animals to flooding chambers, Kennywood had successfully transformed Noah's Ark for a new generation... but in so doing, had trampled on the memories of the generations before.

Any reference to Noah's Ark among Pittsburghers inevitably included one comment: "They should bring back the whale."

A Whale of a Good Time

In 2015, Kennywood announced an unexpectedly retro project set to debut in the 2016 season: the next large-scale restoration of Noah's Ark. The "Elevator of Doom" was removed in November 2015 and trucked away – much to the delight of fans and followers on social media.

Better yet, the next iteration of the 1936 classic would see the restoration of the Ark's "old-school," retro feel! Inside, glowing bold, bright, blacklight scenes would replace the grim caverns and caves of the 1996 redo; air hoses would return to playfully spook ascending visitors; UV paint would fill blank corridors with geometric patterns; scary animal experiences would be replaced with comical gags and setups straight from the '60s; and, of course...

When Noah's Ark reopened in 2016, visitors entered the attraction by... walking down the spongey tongue of a big, goofy blue whale. The "new" Noah's Ark is a masterpiece – a vibrant, Technicolor example of how to restore a classic attraction to its most beloved form while also infusing it with modern showmanship, fresh scenes,... and 21st century accessibility! Take a walk through Kennywood's reborn Noah's Ark here:

Filled with timeless gags, optical illusions, tilted rooms, and – yes – shaking floors, the ascent to – and trip through – the Ark now feels like an experience for the whole family again; a rare remnant of the golden age of the funhouse. Plus, over a hundred years after the first installation at Venice Pier, Kennywood's Noah's Ark is the last... a one-of-a-kind, last-of-its-kind throwback to another time, now revitalized and reimagined for a generation more.

It may sound strange to give a 1936 walkthrough attraction a prominent place in Theme Park Tourist's selective collection of in-depth Modern Marvels, but this Depression-era icon is the kind of classic only Kennywood would commit to; a delightful reminder of another time, reinfused with retro magic. Against all odds, Noah's Ark has survived wars, expansions, overlays, and yes, even floods.

Thank you for joining us on a walk through the history of Noah's Ark at Kennywood! Be sure to share your memories and thoughts of this Pittsburgh classic in the comments below, or when you share this story! Be sure to make the jump to Theme Park Tourist's Legend Library collection to set course for another in-depth attraction story!