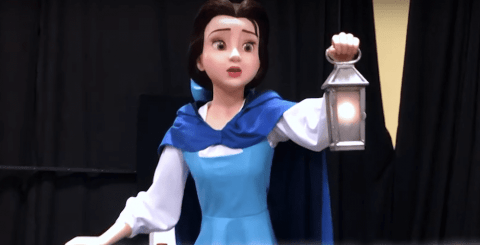 While Hollywood blockbusters continue to be saturated with CGI, Disney and Universal theme parks remain committed to showcasing some of the most advanced audio-animatronics guests have ever seen, either transporting us into the world of live action cinema, or bringing animated characters into the real world. So, where movie-themed attractions are concerned, let’s take a look at some of the most impressive audio-animatronics that wouldn’t look out of place on the big screen.

Bringing CGI-made characters into the real world is no easy feat, and even when Disney Imagineers have managed to replicate the designs, they still face the task of making them believable to guests. But Tokyo Disneyland’s Monsters, Inc. Ride & Go Seek! really breaks that mold. Unlike Monsters, Inc. Mike & Sully to the Rescue at Disneyland California, the audio-animatronics here move with more fluidity, and are much more emotive in terms of expressions, gestures, actions and audio.

While you explore Monstropolis in your vehicle, it’s not that you’ll feel like you’ve suddenly been thrust into the Pixar-animated world from Monsters, Inc. – it’s the other way around. Animated or live action, the monsters here – as well as Boo – are completely believable as characters, all the while retaining the exact same animated ‘look’ from their on-screen counterparts. The inhabitants of Tokyo Disneyland’s version of Monstropolis give a whole new meaning to ‘animated character’.

It goes without saying that the most impressive audio-animatronic on this list is the Na’vi Shaman of Songs, which is also considered Disney’s most advanced to date. One of two signature attractions at the themed land, Na’vi River Journey is the hypnotic and alluring neighbor to the exhilarating spectacle that is Avatar Flight of Passage. When you set sail on the river, you’ll pass through a world of bioluminescent fauna teeming with amazing wildlife.

Before long, you’ll meet the Na’vi Shaman of Songs, and its likeness to the Na’vi from the sci-fi epic Avatar – upon which the themed land is of course based - is nothing short of jaw-dropping. The audio-animatronic moves with such realism that you’ll forget about all the other mind-blowing features you’ve seen along the river so far. This feature really is the pinnacle of innovation, technology and otherworldliness at Pandora – The World of Avatar.

Star Tours - The Adventures Continue is hardly a new attraction, even if its simulator-set story mode is continually updated to keep in line with new movies. But its more physical components, from the Starspeeder 3000 to the squabbling droid-duo are genuine ‘vintage’ props, which is what makes the audio-animatronic C-3PO even more impressive.

The fact that he’s vintage helps his case too, considering he was designed and created in the ’70s. Another ironic detail is that, even within the fictional universe of the faraway galaxy, C-3PO is already an audio-animatronic of sorts. But where Star Tours – The Adventures Continue is concerned, there’s nothing about C-3PO that separates him from his cinematic counterpart, and that’s why we love him as much as we do. And perhaps it’s also because the Star Tours version is just as annoying...

4. Harry Potter and the Escape From Gringotts – Universal Studios Florida

The Harry Potter movies are no strangers to practical effects and animatronics. And the same can now be said about some of the attractions at Universal Studios. Hagrid’s Magical Creatures Motorbike Adventure is no exception, but we think that there’s another attraction in Hogsmeade that makes use of audio-animatronics on a more realistic level – and that attraction is none other than Harry Potter and the Escape From Gringotts.

The first thing you’ll notice upon entering Gringotts is the attention to detail: the marble pillars, stone flooring, glossy wooden desks. But on closer inspection, you’ll see that those goblin clerks behind said desks aren’t just part of the furniture – they’re actually alive. And boy to they look convincing, and perhaps as eerie as the ones we see in the films. While the main attraction itself is a pulse-pounding and immersive experience, it’s the interior of the goblin bank that truly impresses.

5. The Enchanted Tale of Beauty and the Beast –Tokyo Disneyland

The 2017 live-action remake of the animated classic Beauty & the Beast never did live up to the original, so it’s hard to imagine that any sort of attraction would be able to pull it off. After all, the 1991 classic wields buckets of enchantment – and even those buckets are enchanted! But the all-new experience at Tokyo Disneyland, The Enchanted Tale of Beauty and the Beast, has done the impossible – it’s as charming as that very film, which is largely down to its animatronics.

Perhaps audio-animatronics based off of animated characters – and by animated we don’t necessarily mean CGI – are naturally more impressive, which is strange considering we’ve grown accustomed to seeing those characters only in 2D. But here, the likes of Belle and the Beast – and even in his human form, along with all the other castle inhabitants once the spell if lifted, for that matter – are so convincing, you might believe that an old hag did once indeed bewitch inanimate replicas of these iconic characters.

While Hollywood continues to look to theme parks for inspiration, with the likes of the upcoming Jungle Cruise and Pirates of the Caribbean movies, perhaps studios ought to make more commitments to using audio-animatronic technology in their films. The likes of Star Wars, Harry Potter and Jurassic World have, in more recent years, returned to the charm of practical effects, but it’s fair to say that audio-animatronic technology captures a level of believability that CGI doesn't – and the same rule applies to theme park attractions.