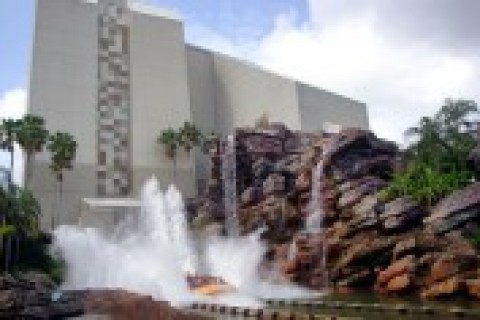 With the likes of Jurassic World: Dominion suddenly picking up a lot of traction through the release of new images and the upcoming preview in IMAX theaters, it’s a great time to cast a lens over some of the prehistoric experiences on offer at Disney World, Disneyland and Universal Studios. So here are some hand-picked attractions, ranked from worst to best.

Where else can you find a train that takes you back in time? After passing Adventureland’s Grand Canyon, a chorus of jungle sounds mark your entry into a prehistoric world, where dimetrodons lurk and pterodactyls screech at you through the glass, where mighty t-rexes battle stegosaurs in arid dinosaur graveyards. As so named by the train’s narrator, the “Fantastic Past of the Primeval World” is a nice little bonus on your railroad tour of Disneyland. It might be very short and dated, but at least you get to see more than the guests on Jurassic Park do (at least during the first half of their tour).

Inspired by the 2001 CG-animated movie of the same name, in which an Iguanadon must lead a herd of surviving dinosaurs to a new land following a disaster, DINOSAUR sees guests board a ‘time rover’. Once back in time, the vehicle must evade explosive meteors and the advances of Carnotaurus in a dense, dark jungle. Fans of the film – and of dinosaurs in general - will find some enjoyment here. The Aladar model outside the building is great, as is the in-ride version, but the other animatronics fail to live up to the quality of those that inhabit the likes of Jurassic Park: The Ride. 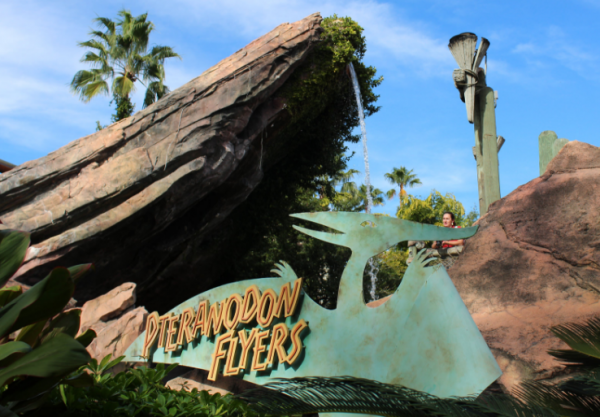 Pteranodon Flyers might sound ominous, but it’s actually an attraction located at Camp Jurassic in Universal Studios Orlando’s Islands of Adventure, in which guests ‘fly’ over the vicinity on a suspended steel rail. Once you’re strapped in, you’ll pass the iconic Jurassic Park gates and those familiar domed rooftops of Camp Jurassic. It’s reasonable to say that this ride is more enjoyable than people might give it credit for - after all, it’s a great way to see Camp Jurassic in all its glory, and though it’s an extremely short experience, what it lacks in duration it makes up for in ambition.

Based on the 2005 remake, King Kong 360-3D is an experience in which guests board a tour bus and enter the primeval world of Skull Island. First, V-Raptors give chase, but they’re nothing compared to the V-Rexes. Fortunately, Kong comes to the rescue, but that doesn’t mean you’re in the clear, as the tour bus plunges down a deep jungle ravine. King Kong 360-3D is a feast for the senses: using a visual CG/3D/HD spectacle accompanied with wind, water, motion and the damp smell of the jungle, this is a must for any fan of King Kong (2005), and anyone looking for an action-packed dinosaur adventure.

Skull Island: Reign of Kong is a trackless ride sees guests arrive at the temple gates from the 2005 film. Here, an audio-animatronic native warns them of Kong, and guests should take notice, as from that moment on it’s nothing but those man-eating, swamp-dwelling meat-weasels, enormous bats and, of course, dinosaurs. Naturally, Kong arrives to battle the prehistoric predators, but this time you’ll also get to meet him in audio-animatronic form, a feature that truly separates this experience from its Hollywood counterpart.

With its highest point being 47m, the new attraction at Camp Jurassic takes guests on a ride so thrilling, it’s enough to make anyone wish they opted for real raptors instead. At 70mph, guests are twisted and inverted while raptors snarl from the side-lines. This highly anticipated ride is much longer than one might expect, and is a solid addition to Camp Jurassic. Also expanding on the Jurassic World theme, it serves as a nice mix seeing as Jurassic Park: The Ride remains firmly rooted (and rightly so) in the original film’s ‘safari’ aesthetics.

Known also as Jurassic Park: River Adventure, this log flume experience is a must. After boarding your river raft, you’ll pass through a tropical plunge pool setting filled with hadrosaurs, before arriving at the facility where dinosaurs have escaped. When your raft ascends indoors, expect overhead raptors and rexes, before you plunge down a waterfall! The Orlando attraction, which was inspired by a scene from the original novel in which the rex gives chase down a river, truly captures the ‘look’ of the 1993 film, from its yellow anorak-colored river raft to the can of Barbasol shaving cream on the bank!

To fit in with the new look of Jurassic World, Jurassic Park: The Ride was given a full makeover. The upgraded version now features a hugely impressive Mosasaur section, and a breakout bookmarked by Bryce Dallas Howard and Chris Pratt in narration-form. And this time it’s the Indominus Rex that stalks you, while compys, dilophosaurs and raptors also appear, as does the T-Rex. If you loved Jurassic Park: The Ride and Jurassic World, it’s hard not to love this ride too. Though you might prefer the ‘safari’ look of the original ride and film, there’s still plenty to love here - and plenty to be afraid of too…

It’s fair to say that dinosaurs tend to be a basic requirement for any theme park, as they remain a huge source of escapism for guests, no matter their age. Naturally, many of the experiences on this list are Jurassic Park or Jurassic World-themed, but quality is key to enjoying any attraction, and when it comes to such a brand, it’s fair to say that theme parks spare no expense…