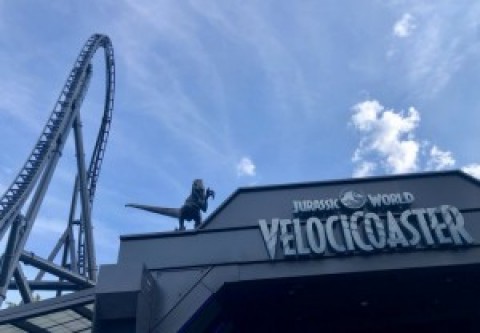 Launch coasters are nothing new. Riders have loved and sought after the feeling of being catapulted into a coaster layout, rather than ascending a more traditional lift hill. There's something about that moment of acceleration, that wind in your hair, that thrill of adrenaline, that pulls riders back to launch coasters time after time.

My parents' first exposure to a launch coaster was in a Schwarzkopf Shuttle Loop. This short and sweet coaster model was once a staple at any major theme park. The ride was made up of three elements: a launch, a vertical loop, and a spike which riders would ascend, then descend, before traveling through the ride layout backwards and ending up back at the station. In the seventies and eighties, these rides were about as thrilling and innovative as you could get. Jump forward forty years, to Kingda Ka and VelociCoaster and Lightning Rod, and launch coasters look a little (see: a whole lot) different.

A Renaissance for Launch Coasters

Look to your left, look to your right. Launch coasters are popping up everywhere. Take Universal's Islands of Adventure in Orlando, Florida, for example. All three of the park's major roller coasters are launch coasters: Hagrid's Magical Creature Motorbike Adventure (as complex a coaster as the name suggests), an Intamin multi-launch "Story Coaster," Incredible Hulk Coaster, a Bolliger and Mabillard sit-down that may look like your standard looper, but packs one punch of a launch in its enclosed lift hill, and now VelociCoaster, yet another Intamin multi-launch, this one far more intense than its sister coaster down the pathway.

The thing is, launch coasters are not one trick ponies anymore. They aren't gimmicks used to lure in riders.

More and more, the generic "lift hill, first drop" method of gaining momentum to make it through a ride layout is being phased out. These coasters will never go extinct, but right now, launch coasters are the trend, the flavor of the month. Thinking over recent and future coaster openings (West Coast Racers, TMNT Shellraiser, Ice Breaker) many feature at least one launch. Pantheon, coming to Busch Gardens Williamsburg soon, is yet another VelociCoaster-style Intamin multi-launch that looks like it might blow even Universal's new coaster out of the water.

This is not the first time launch coasters have seemingly dominated the market--all trends are cyclical, aren't they?

In the early aughts, circa 2001-2008, we saw a boom in launch coasters, not too different than we're seeing now. Top Thrill Dragster at Cedar Point is perhaps the one to blame for this trend. Opening in 2003, this coaster's launch was the ride, overshadowing the 420-foot spike and drop to follow. The launch of 0-120 mph in under 4 seconds was a game changer, yet the record was broken in just two years by Kingda Ka, which launches 0-128 in 3.5 seconds.

S&S also opened Do-Dodonpa (at the time, just Dodonpa) at Fuji Q Highland in Japan. This beast of a coaster flings riders into a launch of 0-112 mph in 1.6 seconds, and is still the fastest-accelerating coaster in the world today.

In this time period, we also saw the debut of rides like Maverick at Cedar Point and Xcelerator at Knott's Berry Farm.

As launch coasters innovate, their capabilities increase, so much so that "launch coaster" is not an adequate way to encompass the variety of the models. There are different types of launches--hydraulic, LSM, LIM--and vastly different uses for the launches. In the case of Hagrid's Magical Creatures Motorbike Adventure, the launches are used to tell a story and bring you into a world. In the case of Top Thrill Dragster, the launch is used to induce nervous, excited, and giddy fear in riders. In the future, what else will launches be used for?

The coaster industry is an ever-changing, ever-evolving animal. The moment you pick up on a trend, it is probably already changing, already innovating, already sweeping the rug out from under us.

What is your favorite launch coaster?