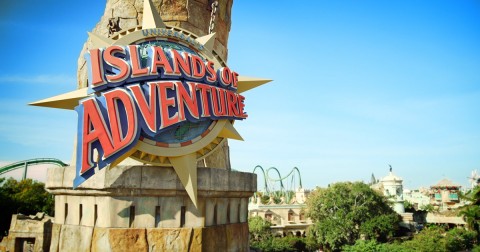 There was a time when Disney was Disney, and Universal was Universal. Then, Islands of Adventure changed everything. Opening in 1999, the much-heralded second gate at the redesignated Universal Orlando Resort at last dispensed with “beige backlots” and “boxy soundstages” in favor of a park built using Disney’s own formula… with a dash of something twenty-first century.

Simultaneously the most and least “Disney” park since Disneyland itself, Islands of Adventure was a mold-breaker. Eschewing blockbuster movies to instead bring to life timeless, intergenerational stories; building unheard-of, IP-centered lands; co-mixing immersive environments with bare steel coasters; brandishing technology as a weapon in the theme park wars, and embedding it in next-century dark rides and shows…. This park was often big, loud, fast, vibrant, and in-your-face.

Except when it wasn’t… After all, Islands of Adventure opened with Universal’s first seeming intentional investment in the unsung heroes of theme park lineups: hidden gems – the kinds of experiences that reward exploration and build-out both a park’s capacity and its mythologies.

So today, we’ll take a tour around the exceptional stories of Islands of Adventure to highlight some of those “secret spots” or thoughtful design details; the kinds of attractions, nooks and crannies, and unexpected surprises you can only find between E-Tickets. We hope you’ll have at least one item to add to your Islands of Adventure “scavenger hunt” after reading about these off-the-beaten-path extras you may never have thought to explore…

The perfect first stop on a tour of hidden gems and secret spots at Universal’s Islands of Adventure must be in Port of Entry. Stylized as a seaside traders’ market that’s harmoniously shared by all corners of the globe, the eclectic village is littered with domes, minarets, pagodas, temples, sandstone, windmills, and more. Port of Entry is exotic, charming, and warm.

That also goes for its quaint details. Guests could spend hours taking in the land’s humorous vignettes, world-building signage, and hidden nooks and crannies. Each serves as an example of how if you go the “extra inch” often enough, eventually you’ve gone the “extra mile.” To that end, one of the sweetest extra inches is the kind of “hidden gem” you need to either search for or stumble upon.

Roosting on a stone cornice beside a copper downspout, eagle-eyed visitors will spot a pair of white doves warmly nuzzled together. We won’t spoil the exact location (it’s a fun “scavenger hunt” item for couples to find on their own) but the lovebirds’ presence is evidence of Universal Creative’s designers thinking big with Islands of Adventure by thinking small. The fact that the lovebirds exist and have remained happily coo’ing for two decades isn’t just a good reminder that true love exists; it’s a great indicator of what makes Islands of Adventure as lovingly adored as many Disney Parks.

Speaking of Port of Entry, after passing under the second of the island’s fabled ancient bridges and into its waterfront “hub,” you may notice an interior courtyard wedged between a thatch-roofed hut and the Croissant Moon Bakery. Blocked by a teal iron gate embellished with fleur-de-lis, this interior courtyard is subtly marked by a bronze shield of a tilted globe ringed by a laurel wreath reading: “Navigators Club – 1671.”

You’d be forgiven for assuming that the “Navigators Club” is merely a facade like any number of false storefronts or “stairs to nowhere” along Main Street, U.S.A. But it’s not. The good news is, the Navigators Club is real, and it does occupy the second story of Port of Entry! The bad news is, despite the obvious brilliance of a Port-of-Entry-set rebirth of the Lost Legend: The Adventurers Club or a breathtaking, adventure-themed Club 33, this is not that. Rather, the Navigators Club is a somewhat bland, boring corporate event space that can be rented for company meetings or catered buffets.

Still, the rare opportunity to stand along the second story of Port of Entry is pretty cool, and visitors can access the space. Some bloggers report that the gate is often left propped open precisely because the Navigators Club is open and accessible, it just feels like urban exploring since it’s empty and unmonitored. We’d recommend at least asking the host at the nearby Confisco Grill if you’re allowed entry. After all, one of the Club’s coolest features is access to the land’s iconic bridge and its views across the lagoon, which will get you noticed quickly by security if that propped door wasn’t meant as an invitation.

At least during the pandemic, Universal opened the space as overflow Confisco dining exclusively to Annual Passholders. It’s one of the rare times the resort has really used the space in any guest-facing way at all, much less granted mass, quasi-public access. Naturally, we’d love to see the Navigators Club actually become something – even if it’s just a Preview Center for coming attractions or an exhibit space exploring the park’s history. Even in its current state, though, it’s a secret spot that even seasoned Universal visitors are unlikely to have stepped into.

Perhaps cajoled by Disney’s continuous emphasis of how important “story” is, Universal Creative developed one for Islands of Adventure. The park’s rarely-spoken backstory is incredibly convoluted and contrived, trying to explain why so many dissimilar intellectual properties all came to inhabit “islands” in one physical place. Frankly, it’s fourth-wall-breaking, very unnecessary, and a lot less fun than just enjoying the park’s wild juxtapositions and “jump cuts” between dissimilar lands. Still, remnants of each land’s part in the tale remain…

Long before Disney’s Marvel Cinematic Universe turned Marvel characters into grounded heroes inhabiting our world, Marvel Super Hero Island invited us to visit theirs. It’s a comic book metropolis that’s stretched-and-skewed; sketched-in; purposefully two-dimensional and hyper saturated with comic-book colors, frozen mid-frame like a freshly-inked panel. Just across from the entrance to the Modern Marvel: The Amazing Adventures of Spider-Man, you’ll find the impact zone that created this island. Represented by six pointed yellow spires erupting from the ground, this is the place and the moment where a massive meteor struck the Earth – the reason that so many heroes and villains have coalesced in one spot.

The impact site’s six pillars are embedded in concrete stylized as comic book smoke with yellow force lines erupting out from the center. Similarly, energy crackles out from the site, with surrounding planters exploding out from its force, themselves shapes like concentric clouds. In fact, the massive smoke released in the strike has apparently cascaded down toward the park’s lagoon, with its frozen comic plumes literally spilling out over the water, which guests can walk on, littered with physical debris. Many guests probably never connect the strange sculpture in the city park with a meteor strike, and even fewer recognize it as part of the land’s “backstory,” but when viewed from the air, the effect is pretty awesome.

Very enjoyable article! Next time I go to Islands of Adventure, I will have to be sure to take my time. And the meteor crash site WAS very cool to see from above - reminded me of the giant hidden Mickey face that was originally at Disney MGM Studios! Thanks for an article that showed me a lot that I'd never seen before!