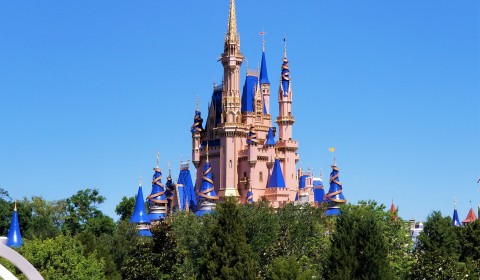 It looks like we’re nearing the conclusion of a singular season for Disney parks, with major changes to park policies being announced quicker than most guests can keep track of.

Over the past year, we’ve followed dramatic shifts at Walt Disney World following the closures of the COVID-19 pandemic. We’ve passed from empty parks in the fall to 35% “full” capacity days with socially-distanced lines weaving through thoroughfares. With the slew of recent announcements from Disney Parks CEO Bob Chapek this past week, it looks like things are about to shift back towards normalcy at Disney parks, and nowhere is this more apparent than in Magic Kingdom.

This update is going to be a little different from our last few glimpses into what to expect right now at Disney parks. Our most recent visit took place on Friday, May 14th—the day after Disney announced plans to reduce social distancing. This was also the day before they announced the end of the mask requirement while outdoors.

Since that Friday, changes have accelerated—the most significant of which is that Disney has increased Park Pass Reservation capacity dramatically. We don’t know exactly what that new capacity number is (we think somewhere between 40-50%), but it means we can expect to see more guests returning in the upcoming weeks, as well as over the course of the summer.

1. Lots of changes to pandemic policies are now in effect (with more to come)

The biggest news of all is that Disney is finally beginning the process of rolling back many major policies in response to the COVID-19 pandemic, in line with other Florida theme parks doing the same.

The first sign of these changes came when Disney announced that guests could take outdoor photos without masks so long as they were stationary and distanced. Not long after this, Disney added they would also begin phasing out temperature checks at the front gate (interestingly, these were still in effect the day we visited).

The first of the really big announcements came the day before we visited—Disney will begin the process of reducing social distancing procedures immediately, except in restaurants and some shops, as well as increasing park capacity.

This is a major shift as distancing has had a unique effect on the parks, partially due to queues winding out into thoroughfares well beyond their native rides. While distancing has had the nice benefit of giving guests some much-appreciated breathing room in queues (#just-say-no-to-neck-breathing), it’s brought some drawbacks in reducing ride capacities, causing lines to spill into thruways, and requiring the addition of plexiglass on some attractions.

The biggest announcement, of course, came the day after we visited—Disney parks will no longer require guests to wear masks outdoors. To clarify, that’s outdoors only—Disney will still be enforcing mask wearing inside attractions, restaurants, resorts, shops, etc. However, with the Florida heat index quickly rising, the policy change is certainly welcome news to many guests.

How quickly are these changes being implemented though?...

2. Some of the changes will be gradual

I will admit, when I woke up on May 14th and saw Bob Chapek’s announcement—particularly his emphasis on the word “immediately”--I expected some pretty rapid shifts to start that day, including the removal of distancing markers and a visible increase in guest attendance.

Our visit actually wasn’t that different than previous ones this year—we still had our temperature checked, distancing markers still were in place, and cast members continued to make announcements to remind guests to stay six feet apart in queues.

Attendance felt about the same as other times we visited at 35% capacity. This may have been due to the fact that the announcements were still fresh, as well as effects of the Colonial Pipeline shutdown that may have deterred some visitors.

A lot has changed since that visit however, with Disney parks attendance having now reached the new capacity cap...

Disney has already begun the process of instituting these new policies. Guests have noticed rides across Walt Disney World loading multiple parties, as well as the removal of plexiglass from some attractions. Distancing markers and signage have slowly started disappearing from some theater-based attractions as well as some queues. Disney is also in the process of removing entrance and exit stickers from shops.

3. Crowds are going to increase, and opening gate is still the best way to catch short lines

It’s safe to say with summer vacation on our doorstep, we have likely bypassed the last pocket to enjoy lower crowds at Walt Disney World. While some local residents and spontaneous trip-planners may immediately have an effect on attendance numbers, more visitors will likely start appearing in the coming weeks as people have time to plan summer vacations. Local Passholder blackout dates may offset this partially, but attendance is almost certainly going to increase.

The increase in capacity is going to mean more people getting into lines, so you can expect a significant increase in wait times as more people return to the parks. Still, we can still use the data from that day to determine some important clues about touring strategies. Here’s an example of what wait times looked like visually on Friday, May 14th. Once again, keep in mind these numbers will be higher from here on out (check My Disney Experience for the most recent numbers).

Magic Kingdom is unique at Walt Disney World as it is almost entirely attraction focused—rides, rides, rides is the name of the game. Queue times are a big deal in this park, and guests tend to tour in a predictable pattern—usually starting with Fantasyland and working their way around the map in a reverse question mark pattern. Just reversing this pattern has, historically, been a way to reduce some waits—this remains partially true, with some exceptions.

Arriving at opening gate remains the best strategy for reducing waits right now. The park is opening quite early these days—around 8 AM. Considering that the majority of guests still have to pass through the Transportation & Ticket Center (and others may have difficulty waking up sleepy little ones), most visitors are drifting in later in the morning.

With the exception of the Seven Dwarfs Mine Train (which hit 60 minute waits within minutes of 8 AM), almost all attractions had waits under 30 minutes for the first hour of the park opening.

By 9AM, several attractions started to mark increases in wait times—specifically Splash Mountain (at 40 minutes) and the Jungle Cruise (at a whopping 55 minutes). From about 9:45 AM on, we saw the beginning of a steady incline of raising wait times throughout the park. Several rides including Space Mountain and Pirates of the Caribbean hit peak wait times by 11:00 AM.

The longest waits of the day were seen between 11:45 AM to 2:30 PM. Splash Mountain and the Seven Dwarfs Mine Train tied for longest queues at 65 minutes, with Space Mountain and the Jungle Cruise trailing closely behind at 55 minutes. This follows a pattern that longtime visitors to the Magic Kingdom might be familiar with—the lunchtime hours are honestly the best time to take a break from the parks if you have access to a nearby resort. You could, theoretically, also use these hours to enjoy exploration-focused attractions or rides with low queues.

With the exception of Splash Mountain and the Seven Dwarfs Mine Train, wait times across the park dipped or evened out from about 4:00 PM, with the lower waits for E-Ticket attractions from 7:00 PM on. The primary reason for this is likely the continuing absence of an evening fireworks display—if fireworks suddenly return to Magic Kingdom in the coming weeks, you can expect more guests to stay in the park at least until the first fireworks show.

CONCLUSION: Your best bet visiting Magic Kingdom to avoid long lines is to arrive at opening gate—before opening gate, if possible. The lunchtime hours are an ideal time to avoid high-demand attractions or take a break at your resort. Return any time after about 4:00 PM, and you can expect a better probability of getting to enjoy lower waits, especially the last hour before closing.