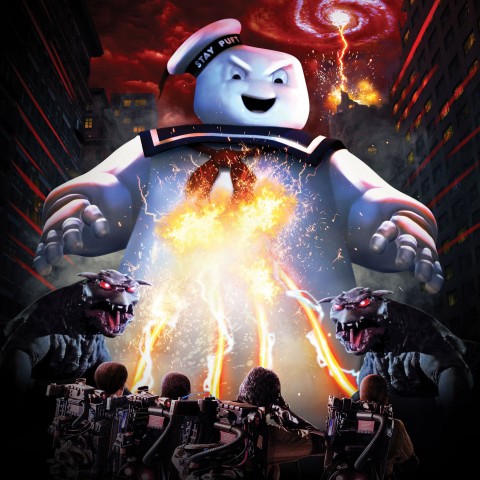 Not so long ago, there was something strange at Universal Studios Orlando. With two hit movies under its belt, the Ghostbusters franchise was hot property in the ‘90s (like a fried egg fresh off the kitchen counter, some might say), and at the time was brought to life at the theme park for fans to rediscover, with further iterations to follow in more recent years. So grab your proton packs and your ecto-goggles, as we take a look at the history of Ghostbusters at Universal Studios…

Between 1990 and 1996, Ghostbusters Spooktacular was an experience inspired by the 1984 classic. Located, of course, at the park’s New York area, the original version of the 20-minute movie-themed stage show saw guests queue outside the façade of the iconic Firehouse before taking their seats inside, where the Sumerian Temple of Gozer, as seen in the original film, materialized on stage. A female guide then appeared and talked about the Ghostbusters, followed by the ugly little spud, Slimer. Before long, Gozer herself appeared, accompanied by lots of other ghouls and ghosts that would turn the audience white.

But who ya gonna call? Ray Park Jr., of course, because his iconic theme song then played overhead; the Ghostbusters’ cue to start “savin’ the day”. The rest of the show featured acrobatic stunts, proton streams (which may or may not have been crossed) and, once Gozer asked the Ghostbusters to “choose the form of the Destructor”, the StayPuft Marshmallow Man (he just popped in there). But like with any good marshmallow, he was roasted over a hot flame. After the show, guests were able to enjoy the attraction’s giftshop, the Paranormal Store (we think they missed a trick in not calling it the Ecto-Containment Unit).

Much like the 1984 film, there were two versions of Ghostbusters Spooktacular, the second of which would run until closure. This one, continuing the same name, was hosted by Louis Tully, the hilarious, down-on-his-luck accountant from the first two movies. Outside, guests queued under the sign, “Seminar Hosted by Louis Tully”, and fortunately there was no gatekeeper stopping them from entering the soundstage, nor was a keymaster of any kind required (it’s a surprise Tully hadn’t locked himself out of his own show, to tell you the truth).

For the ‘pre-show’, Tully picked volunteers from the audience to help out with various demonstrations, involving things from the films such as the pink psychomagnotheric slime and the Ghostbusters’ equipment. For the main show, an irate Walter Peck appeared, who once again recklessly shut down the Containment Unit, ultimately releasing ghosts and the Temple of Gozer. The events that followed were similar to the first version of the show; a battle between the Ghostbusters – this time aided by Louis – and the StayPuft. However, guests were also treated to a melted marshmallow-covered Walter Peck. What that guy really needed, though, was a nice fruit basket.

It sounds like a cheesy rip-off, but StreetBusters was an official Ghostbusters experience. The seasonal show opened in 1991, and featured the Ghostbusters trying to catch Beetlejuice (an odd choice, but a crossover movie we’d love to see nonetheless). But the show wasn’t particularly story-focused, instead having its stars – with the striped pyjama-wearing villain included – dance on stage to the likes of ‘Super Freak’, while a Slimer puppet waved at onlookers from the Ecto-1. The show ceased performing in 1993, but would eventually be brought back from the spiritual realm in the form of Extreme Ghostbusters: The Great Fight Way in 2002.

Loosely based off the follow-up to The Real Ghostbusters animated series, Extreme Ghostbusters: The Great Fight Way replaced StreetBusters. A creepy voiceover, accompanied by Frank Sinatra’s ‘New York’, kicked things off, welcoming Beetlejuice to the stage once again, who would call volunteers to join in and dance. Then, blaring sirens heralded the arrival of the Ecto-1, though it wasn’t quite the version from Extreme Ghostbusters. Naturally, Ghostbusters emerged from the vehicle to perform a series of dance routines, but blue-haired fan-favorite Kylie Griffin was also absent, which cemented the fact that there was nothing ‘Extreme’ about this stage show. When Universal didn’t renew their contract for the rights to use Ghostbusters in their parks, the show was shut down.

Inside the haunted house codenamed ‘Hysteria’, guests would reluctantly explore the Public Library as seen in the film, where books moved and shelves dripped with slime. Soon enough, the floating librarian ghost made her appearance, shushing guests before transforming into a hideous monster. In the Firehouse, Janine took calls at her desk, while a Slimer hologram haunted the Sedgewick Hotel. Other spooky settings included Dana's apartment, where guests would see Miss Barrett taken by Terror Dogs. Ghoulish cameos included the Scoleri brothers, Gozer and StayPuft. So you don't need to ask why this haunted house was dripping with goo.

Universal Orlando Hollywood’s Haunted Maze version was, in many ways, very similar, taking inspiration largely from the original movie and somewhat beyond. Guests would enter via the Firehouse facade, where inside, Janine answered calls at her desk while a Ghostbuster appeared from time to time, kicking out their traps before disappearing. Then it was onto the Containment Room where all sorts of spooky things could be seen through the walls, and then the Public Library for some quiet time with old Eleanor Twitty. Settings that followed were the Sedgewick Hotel and Dana's apartment, while the usual ectoplasm-secreting suspects made their appearances.

Following a year-long delay due to the pandemic, Ghostbusters: Afterlife finally hits theaters this November. But will it influence any new experiences at Universal Studios? This time, the ghost-busting action abandons Manhattan for a sleepy backwater town, and judging by the trailer, there’s plenty of theme park-worthy settings, such as a creepy barn that houses the rusty Ecto-1, a secret basement left behind by Egon Spengler, a spooky mineshaft and a supermarket where mini StayPufts run amok. It’s far too early to tell whether something strange will ever return to our favorite movie-centric theme park, but if there’s a steady paycheck in it for Universal…