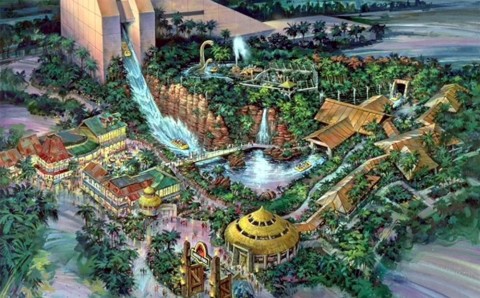 In the early 1980s, Michael Crichton decided to resurrect the dinosaurs. His first attempt was a feature screenplay about a grad student reverse-engineering the DNA sequence of a pterodactyl fossil. There was just one logistical question he couldn’t answer - who would foot the bill?

“Because it’s not a cure for cancer,” said the author in an interview included among the special features of The Lost World: Jurassic Park. “The only thing I could think of was that it would be some form of entertainment.”

The answer was theme parks.

Jurassic Park: The Ride was only a matter of time.

In 1989, Steven Spielberg was working with Crichton on a medical drama that would eventually turn into ER when he caught wind of the work-in-progress. The mix of hard science and old-fashioned adventure hooked the former dino-kid immediately. It also provided a unique opportunity to bring his blockbuster reign full-circle: “I was really just trying to make a good sequel to Jaws, on land.”

He had to have the rights. And he did, momentarily.

In the mid ‘80s, Crichton sold the mere idea of his novel Congo for $1 million after a ferocious bidding war only for the winner, 20th Century Fox, never to make it. Jurassic Park was different. He wrote it because he wanted to see a dinosaur. That mattered more than the competing paychecks.

Crichton told Spielberg, “I’ll give it to you if you guarantee me you’ll direct the picture.”

Despite the author’s request to set the property at a firm $1.5 million so Jurassic Park went to the right filmmaker and not the richest, the agency that represented him pounded a very loud gavel. Everyone wanted in. Studios lined up with their hottest directors - Tim Burton for Warner Bros., Joe Dante for 20th Century Fox, Richard Donner for Columbia. James Cameron made a play for the rights independently.

Ultimately, Universal listened to Spielberg and paid up.

In May 1990, it was made official - Jurassic Park would be a Steven Spielberg production. But for the past four years, the company had been looking to its brightest star for more than just box office receipts. It was his suggestion of a Back to the Future attraction that brought plans for a Universal Studios Florida back from the dead and earned him an on-the-books position as executive creative consultant for the park. Directing so many cinematic roller coasters served him well - Spielberg knew a good ride when he saw it, and this one was almost too obvious.

In November 1990, it was made unofficial - Jurassic Park would be a Universal Studios attraction.

Work on the film and ride began simultaneously, with MCA Recreation Services getting the latter ball rolling. Before long, they’d need an entertainment design and production company to do what Crichton did almost a decade before in that very first script - bring dinosaurs back to life.

The Landmark Entertainment Group was an obvious choice.

Under the direction of co-founders Tony Christopher and Gary Goddard, Landmark had closed the technological gap between Universal Studios Hollywood and Disneyland. In 1983, the company sketched an explosive blueprint for all Universal effects shows to come with The Adventures of Conan: A Sword and Sorcery Spectacular. In 1986, it revitalized the world-famous Studio Tour and changed the scale of theme park storytelling with King Kong Encounter, the attraction that first inspired Spielberg’s pitch for Back to the Future: The Ride. In the summer of 1990, Landmark handed over the keys to the Ghostbusters Spooktacular.

Obvious as the company was for Jurassic Park: The Ride, it still won the project on a gamble.

In both the novel and the film, then working between drafts from Crichton and Hook scribe Malia Scotch Marmo, the key attraction in Jurassic Park is the automated safari. No matter the make or model - Toyota Land Cruisers on the page, Ford Explorers on the screen - it was the easiest possible adaptation, almost one-to-one for a theme park environment.

With access to the script limited to the Amblin offices, the Landmark team instead took inspiration from the biggest setpiece lost in translation - the Jungle River Cruise.

The sequence lasted long enough for storyboards - Dr. Grant and the kids board an inflatable raft to escape the T-Rex only to discover it can swim - but the last screenwriter on the project nixed it. David Koepp, fresh off the arduous production of Death Becomes Her, considered it, at best, redundant and, at worst, eye-wateringly expensive. It survived in fragments among the tie-in video games and sequels. For the time being, however, it was scrap.

Which is why the pitch for what was then called The Jurassic Park River Adventure surprised Spielberg. More importantly, though, it excited him. Nevermind the technical limitations that informed Landmark’s direction - there was and, to date, is no physical way to compellingly replicate the T-Rex chase from the film in a theme park environment - the River Adventure offered the filmmaker expansion. It wasn’t just playing the hits of his movie, but fleshing it out, making it real beyond the credits.

Water was the way, and there was no time to waste.

Production began on Jurassic Park in August 1992 and wrapped in November. The simultaneous work, sometimes on the same backlot, allowed for chicken-egg assistance. In the film’s lunch scene, a concept painting of the River Adventure can be seen projected on the screen behind Richard Attenborough. Universal left the Visitor Center set standing on Stage 12 for almost a year after the film’s release and the Landmark team snuck in two weeks before demolition to shoot the preshow.

In between, plans changed.

Early concepts called for an awning over all outdoor scenes. A massive aviary for the island’s flying residents, another excised sequence from the novel, was worked in as the last scene before boats floated indoors. The industrial climax saw the most tweaks and reductions. At one point, a live actor would’ve attempted evacuation only for raptors to attack and riders to slide backwards, a prelude to Revenge of the Mummy’s false exit. One particularly grisly sketch shows a massive spine-backed dinosaur decomposing in manmade effluvia.

The biggest change was geographic.

The River Adventure was always intended as a multi-park installation, to be built at both Universal Studios Hollywood and Universal Studios Florida. In Hollywood, it would take up half of the guest-accessible Lower Lot. In Florida, it would replace the Swamp Thing sets in the plot now occupied by Men in Black: Alien Attack. After all, neither park had a water ride.

Cartoon World, the company’s planned second gate in Florida, had several, but not enough characters to populate them. Negotiations with Warner Bros. for the theme park rights to Looney Tunes and D.C. superheroes fell apart. Universal already had some catalogs signed, but there just weren’t many recognizable cartoons left to fill out an entire world.

With the premiere looming - June 11th, 1993 - and no theme park attractions to show for it, Universal improvised. The Hollywood River Adventure was only a few years off, so most of the marketing blitz was aimed at Florida.

In March 1993, a thatch-roofed shack appeared on the corner of The Boneyard nearest The Funtastic World of Hanna-Barbera. It was the first dedicated piece of Jurassic Park in Universal Studios Florida, but not the only place to buy little plastic Laura Derns. Dinosaur merchandise hit the Ghostbusters Paranormal Store like a stampede. Plushes. Colorforms. Wristwatches. Baseball caps. Fannypacks. If it could bear the logo, it did and it sold.

By May, two picture cars from the production joined the settlement, Explorer #05 and Jeep #12. If anyone missed them, parked on Plaza and Sunset respectively, they certainly wouldn’t miss the new strollers, modeled after the latter vehicle’s sand beige, red stripe style.

The movie opened and promptly became the highest grossing of the year.

Nicer digs were in order.

Jurassic Park: Behind the Scenes moved into the Pantages lobby, offering guests something to look at between showings of The Phantom of the Opera Horror Make-Up Show. The most iconic costumes and props were displayed like museum pieces. A making-of featurette played on constant loop. Most of the space was taken up by a star on-loan: the robotic triceratops treated by Dr. Sattler.

A smaller outpost, Jurassic Park Visitor Center, was added to the Upper Lot in Hollywood, taking over the Sound Tracks Recording Studio. A static brachiosaurus head loomed over the entrance to survey the surrounding hills.

When the movie became the highest grossing of all time, Universal doubled down.

Hollywood received a counterpart exhibit, called the deceptively similar Behind the Scenes of Jurassic Park, that included many of the same sights as the Florida exhibit but on a much grander scale and much tighter schedule. Assembled in a soundstage on the Lower Lot behind Backdraft, the walk-through attraction featured an indoor jungle, a video presentation on the film’s pioneering special effects, and dedicated dioramas for each prehistoric performer, including the brachiosaurus from the Visitor Center roof. There was even enough room to keep that park’s picture car - Explorer #04 - out of the rain.

For a while at least - Behind the Scenes of Jurassic Park only ran from January 1st, 1994, to the end of May.

Florida’s new addition, as well as its older Behind the Scenes exhibit, lasted a while longer.

A thicket of palm trees sprang from the asphalt behind The Boneyard hut. Electric fence held back the vegetation but was no match for a 1:1 scale fiberglass sculpture of the T-Rex pulled straight from Stan Winston’s legendary creature shop to menace whichever vehicle happened to be parked there that day.

The Jurassic Park T-Rex Attack! would eventually prove to be the resort’s most enduring photo-op, outlasting its original name, location, and canonical chronology.

But Hollywood didn’t need any more boosts - everybody knew what was coming.