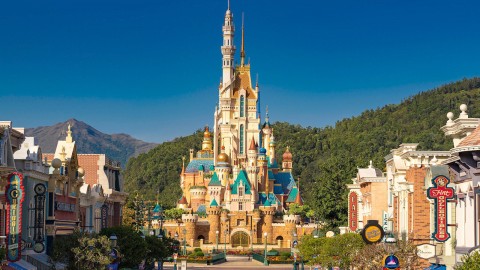 Maybe aside from Mickey Mouse himself, there’s nothing that says “Disney” quite like a good castle. The quintessential image of the “Disney Castle” has embedded itself so deeply in pop culture over the last seventy years, it can be hard to imagine that there was ever a time when castles did not instantly conjure images of either animation or vacation. But to our thinking, Disney just created its first castle catastrophe... Here's why.

Of course, it all started with Disneyland in 1955, and with the storybook-scaled Sleeping Beauty Castle (just 77 feet tall!). The dainty, diminutive castle may be the subject of punchlines by Floridians, but few who’ve set eyes on it would disagree that it’s perfect for Walt’s original, fairytale park. Designed by Disney Legend Herb Ryman and based on Germany’s iconic Neuschwanstein, it’s an absolutely dreamy little castle.

For the larger, grander, and more magnificent Magic Kingdom, Ryman returned to the drawing board. No doubt granted a much, much larger budget for the much larger park, Cinderella Castle oozes magnificence and grandeur – a better fit for the larger scale and scope of Walt Disney World. Even those who prefer Disneyland’s can’t help but gaze upon the 189-foot tall castle in Florida and think, “Now that’s a park icon!” (The corporate castle you'll see on the title card of a Walt Disney Studios film is a combination of both.)

And so it goes for their follow-ups. Per its owners’ request, Tokyo Disneyland opened in 1983 with a pretty exact clone of Magic Kingdom’s Cinderella Castle. When Disneyland Paris opened in 1992, it was gifted Le Château de la Belle au Bois Dormant – ”Sleeping Beauty’s Castle” – but unlike California’s, the uniquely-European icon was passed through a lens of Eyvind Earl fantasy and is pretty unanimously understood as the company’s most beautiful.

Then there was Hong Kong Disneyland… opened in 2005 (the same era that created the Declassified Disasters: Disney’s California Adventure and Walt Disney Studios Paris), the itty bitty park was noteworthy for just how little was noteworthy about it. With painfully few rides, practically no E-Tickets, and a pitifully small layout, the park had absolutely nothing one-of-a-kind… including its castle.

When it opened, an exact copy of Disneyland’s Sleeping Beauty Castle was repurposed as its own icon. Obviously there’s nothing bad about Sleeping Beauty Castle… In California, it’s a wonderful, untouchable, historic, and downright iconic centerpiece. But to duplicate the structure in Hong Kong signaled a certain lack of… ambition. (Allegedly, then-CEO Michael Eisner even suggested saving money by leaving the back of the castle hollow, revealing internal scaffolds and structural steel… hey, the man loved a "backlot"!)

Even with the addition of three one-of-a-kind mini-lands (anchored by the Modern Marvel: Mystic Manor), Hong Kong Disneyland remained an unfortunate flyover; perhaps the world’s first unremarkable Disneyland… and that was a really bad situation given what happened next…

To make matters way, way worse for Hong Kong Disneyland (and its majority owner and financier – the Hong Kong government), in 2016 Disney opened its first from-scratch resort since Hong Kong, also in China. Shanghai Disneyland was a complete revolution and reinvention of the “Disneyland formula.” Filled with one-of-a-kind E-Tickets like Pirates of the Caribbean: Battle for Sunken Treasure and the Modern Marvel: TRON Lightcycle Power Run, Shanghai Disneyland was definitely put on the map in a big way… and identified by a fittingly-massive icon.

The Enchanted Storybook Castle – the first to not celebrate a particular Princess at all – is gargantuan with its red stone exterior, record-breaking size, and its oxidized blue turrets. Though divisive in its own way, the Enchanted Storybook Castle certainly makes a statement. Like it or not, it said as much as Shanghai’s ambition as Hong Kong’s copied castle said about its lack of ambition.

Totally coincidentally, of course, five months after Shanghai opened, Disney announced that they had made the totally-altruistic decision to return to Hong Kong Disneyland for a second round of booster shot expansions to try to make the 2003 park worth seeing in the same country as the much larger, much grander, and much more ambitious Shanghai park. Alongside a Marvel land, a Frozen land, and a Moana show, the expansion included… a new castle.

And wouldn’t you know it? Hong Kong’s castle would snatch Shanghai’s size record, gifting Hong Kong with “the world’s tallest Disney Parks castle.” While such a record seems somewhat unfit for a still-small park designed with the original Disneyland’s more storybook scale, it probably could’ve turned out well…! But the first concept art signaled something was amiss.

The Castle of Magical… Nightmares?

The Castle of Magical Dreams looked incredibly odd on paper. Clearly, artificially built out from the obviously-remaining Sleeping Beauty Castle base, it appeared to be stretched and skewed like a photo resized from the left and right sides rather than the corners. Inverting the pinks of its predecessor, the new castle concept was oddly yellow and bronze and tan and copper and green; colorless windows and wildly varying scales... The original (but augmented) castle its its lower third and an upper third obviously existing only to break a "record"...

Oddest of all, though, was its middle third, where mixed-and-matched architectural styles were clearly meant to look “eclectic," but read as an ineffective take on the style already perfected by the park's own Mystic Manor a few hundred feet away...

Via the Disney Parks Blog, Disney insisted that the castle’s piecemeal makeup was part of its charm; that here, at last, Disney would offer a castle of perfect synergy, dedicating one tower to each official member of the highly-guarded Disney Princess franchise. Either through golden “toppers,” printed patterns, or architectural embellishments, all thirteen royals would be represented in a purposefully-playful, quasi-international showcase.

When the Castle “officially” debuted on November 21, 2020, Disney Parks fans across the world were pretty stunned by the end result… and for most, not in the way Disney had hoped. Wildly out of scale for the park and incredibly odd nestled into the foothills of Hong Kong's mountains, the supersaturated and heavy castle is... well... weird.

Beneath all the architectural bric-a-brac, the original Sleeping Beauty Castle is still there, still obviously, classically present, just weighted down by a whole lot of odd, asymmetrical, yellow, tan, brown, and green towers. Perhaps weirdest of all, turrets are draped in obviously-fake vines that look like they'll fade and gather dust faster than the plastic plants you'll find in many dining room planters across the country. It reads as artificial and contrived; like big, heavy, weighted addendums onto the original castle without much care put toward timelessness or, y'know, beauty.

It’s okay to look at Hong Kong Disneyland’s castle and like it for being different, or unique, or colorful, and very rarely do we presume to know better than the actual, paid architects, designers, and artists who create the Parks we love. But frankly, this is a #badcastle. It looks like a giant, unbalanced, disharmonious, royal mess. It’s hard to imagine that even Imagineers look at the final product and think, “Success!” We're not quite sure how anyone would begin to explain it to Herb Ryman...

It’ll be interesting to see if the “Castle of Magical Dreams” remains the park icon of Hong Kong Disneyland twenty years from now, or if once again Disney has to return to the park for a slightly more timeless reimagining… Until then, enjoy this rare concept art signalling that for a time, Imagineers had considered turning Sleeping Beauty Castle into the castle from Tangled instead… and boy, we sure wish they had…

Thanks for the heads up on this, it has been changed in the article. Apologies and thanks for reading. Natalie

Well your wrong on just about everything.

The 6 Marvel Attractions Every Fan MUST Experience