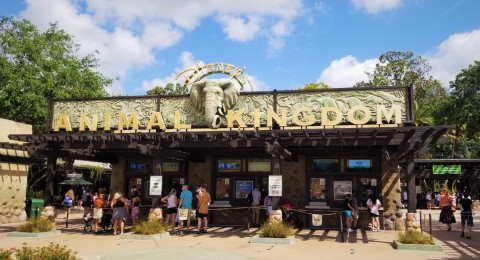 It’s a very special month as we’re bringing you not one, but two updates on Disney’s Animal Kingdom. Earlier this week, we were able to dive into some of the highlights of the park’s Earth Month celebration. What about the rest of the park, however?

The last time we took an in-depth look at Disney’s Animal Kingdom was back in January. Early in 2021, it felt a bit like the park was still finding its stride after reopening—hours were very short, to the point that if you didn’t arrive at opening gate, you’d have some problems. The upside was that crowds were uniquely low, giving guests lots of space to explore.

We’re in the midst of the brief lull before summer arrives, and many things have changed at Disney’s Animal Kingdom—mostly for the better. What has changed? Does the park feel crowded now that most days are full? Is it still feeling like a half-day park?

Our most recent visit took place on Thursday, April 23rd—a weekday at full park capacity (currently maxed out at 35% + park hoppers after 2:00 PM). Here’s what we found…

1. Even at full capacity, it doesn’t feel too crowded

One of the best things about Disney’s Animal Kingdom is that it is HUGE—Walt Disney World’s biggest park, by far. While this layout does make for a lot of walking time for guests (especially in the parking lot since trams are still down), it also means that even at full 35% capacity, the park still doesn’t feel overly crowded.

This is a stark contrast to some of Disney’s other parks. At this time, pretty much all Disney parks are filling up to full capacity every day. This is most noticeable at Magic Kingdom due to the park’s layout and abundance of attractions. Epcot and Disney’s Hollywood Studios have done a little better, but they can still feel crowded at times.

Disney’s Animal Kingdom is actually quite comfortable to explore at this capacity—there’s more than enough space and things for guests to do. For guests who have access, this is a great time to visit this beautiful park (before Disney inevitably raises capacity).

Until March, Disney’s Animal Kingdom had been operating on shortened hours. When we visited back in January, the park was only open from 8:00 AM to 5:00 PM. If you didn’t arrive right at opening gate, you could run into challenges being able to see the whole park.

We are very happy to see hours at Disney’s Animal Kingdom have been expanded back to a full 12 hour window. This small change has had a major effect on dispersing crowds throughout the day and giving guests more freedom to tour without feeling rushed.

Another benefit of this is the return of some “dusk” time activities—not necessarily “nighttime”, but at least something close. The sun is currently setting right around 8:00 PM in Florida, meaning we haven’t quite hit the window when evening safaris are possible.

Also, the addition of early evening hours means some guests are getting to enjoy short displays of "Nights at Pandora" right around the time the park closes. While it will be awhile before the sun sets late enough to allow for extended exploring, we're happy to see Disney brought Pandora's incredible evening displays back despite the late sunset time.