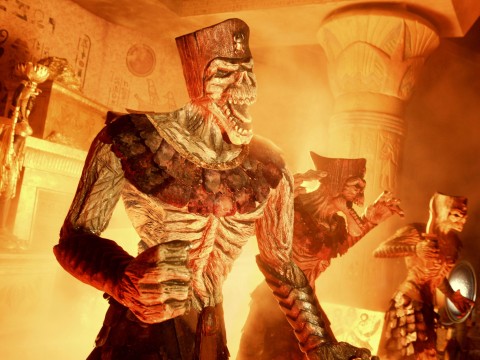 It’s not a stretch to say that Universal Orlando Resort is home to two of America’s premier theme parks. The park has grown with the times, constantly innovating, constantly asking the question: What comes next? Universal’s shiny new rides—Escape from Gringotts, Hagrid’s Magical Creatures Motorbike Adventure, and now VelociCoaster—light the torch for theme parks across the world to follow.

…So why is Revenge of the Mummy the most beloved ride at Universal?

Revenge of the Mummy is a dark-ride-slash-coaster found in the New York section of the park. The ride, having opened almost twenty years ago, doesn’t inspire with its technology or shock with its intensity. But as the rides at Universal Studios—from Jaws to Earthquake—have come and gone, Revenge of the Mummy has stood tall, unmoving, a consistent ride with a consistent 20-minute line.

The ride, objectively, is average, but has a cult following that’s anything but. When you ask a Universal annual passholder what their favorite ride at the park is, most will name this iconic ride. The ride has a nostalgic glow to it: the ride holds some iconic lines and the queue line is one of the best in the park, with its dark hallways, Easter eggs, and wood-creaking eeriness.

But why? In a park so constantly shifting, why has this ride not only withstood the test of time, but risen through the ranks to become a staple of the park?

The Origins of the Mummy

Revenge of the Mummy opened at Universal Studios in 2004, manufactured by Premier Rides with collaborators Dynamic Structures and the Universal Creative team. The coaster's story is based off the 1999 Mummy films, movies that have retained their own cult following in the decades to come. This isn't quite a story coaster to the extent of Hagrid's Magical Creatures Motorbike Adventure, but does utilize the queue line, pre-show, ride experience, and even an now-iconic post-ride scene (something about a cup of coffee) to communicate the twisted story of Reggie, the medjai symbol, and Brendan Fraser's on-set escapades.

The ride doesn't have the most up-to-date animatronics, doesn't exceed 45 miles per hour, and doesn't do anything to knock the proverbial socks off of riders. But since its 2004 opening, its acclaim has only grown.

Universal Studios may be most famous for their annual fall event, Halloween Horror Nights. Running from early September through sometimes as late as the first weekend in November, these extended evenings are addicting--once you get a taste, you come back year after year. But in the 10 months that stand between horror nights, riders can get their fix on the Mummy.

Revenge of the Mummy is the closest Universal gets to a year-round horror attraction (perhaps paired with the Horror Make-Up Show). The experience starts with a dark and twisty queue line filled with tricks, shadowed corners, and tight hallways. Sometimes, ride attendants jump in on the experience by banging on walls and shocking guests. The music and settings permeate tension in riders, both eager and timid for the ride to come.

Once seated and secured in the four-by-four ride vehicles, ride operators' cheery thumbs-ups will turn upside-down in foreboding terror as the trains lurch forward and into the darkness. The ride to follow keeps up the tone, with beetles, fire, and mummies, oh my!

If effects aren't enough to scare you, the ride itself sure will. Though the coaster portions do not exceed 45 miles per hour, the coaster's uphill launch is sure to spook riders as they're catapulted into darkness. This ride has just enough of those sweet, sweet scares to sustain horror lovers through the rest of the year.

Most of Universal's oldest attractions have unfortunately phased out as maintenance has become more extensive, space has been needed for other expansions, and intellectual property (shows, movies, franchises, etc.) priorities have shifted. Even Jaws, arguably Universal's most beloved attraction, was closed to make way for expansions in the Wizarding World.

Media is a fickle, fleeting thing, which is why you'll see so much turnover in Universal's rides. Parks heavily reliant on intellectual properties run the risk of being immediately dated (don't get me started on Universal's new Bourne Stuntacular, which may already be dated). Think of Tiger King. Outer Banks. Heck, think of Game of Thrones. People move on from things quickly.

And yet, the Mummy, a franchise from 20 years ago that has since been (unsuccessfully) rebooted, has remained steadfast in the park. In 2017, when Tom Cruise's new Mummy series premiered, there were unofficial talks of the beloved attraction receiving an overhaul to reflect Universal's "new and improved" franchise. To fans' relief, however, this did not happen.

Just because this ride has stood the test of time, that doesn't mean it isn't dated; it is. But that's part of what makes it. There's a charm to the jagged motions of Reggie's toilet-paper-wrapped animatronic, an endearment in the way the fire in the opening scene only works half the time.

This ride is iconic because it's not trying to be a new, shiny thing. This ride shows the strings, shows the flaws, and fans love riding it all the more. What makes this ride a shining beacon of wonder for fans is nothing you can really put on paper--stats or impressive new technology. Instead, Revenge of the Mummy has reached iconoclast status by not changing, by remaining an echo of a former Universal, a former life for a park less concerned about wowing and more concerned about pure fun, an aspect of the theme park industry that's as underrated as it is absolutely crucial.