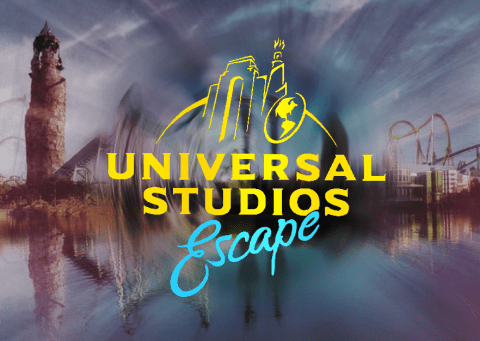 Imagine if, instead of finding Florida, a second park was added to Disneyland and the resulting complex christened Walt Disney World.

World would mean ‘land, but ‘land would only mean a quarter of World, factoring in future resorts and shopping. How do you communicate that to the millions of guests who had been to Disneyland, but never Walt Disney World? Can you run ads for the new park and the new resort separately and simultaneously? What does guest services tell the people from Paducah that flew across the country just to spend double on admission for what they were sold as one big gate?

Such is the unique tragedy of Universal Studios Escape, a cautionary tale of bad branding and worse timing.

Expansion plans for Universal Studios Florida started with a closed-door meeting in 1991, just one year after its famously rocky opening season. Jay Stein, head of the MCA Recreation Services Group and godfather of the first park, proposed a sequel - “Project X.”

Disney had already tried to beat Universal at its own game, some would say illegally. When the competition announced its partnership with MGM Studios, Stein was honest with reporters: “We were just stunned at what those bastards did.” Somewhere between legend and litigation, the story goes that Disney CEO Michael Eisner heard Universal’s pitch for a Florida complex when he still worked at Paramount. His public defense did little to put out that fire: “I never even saw [the plans] and I’ve never been on the Universal tour in California - I heard it was boring.”

If there’s one thing Universal Studios Florida was not, it was boring. If anything, the reckless pursuit of bleeding-edge thrills would be the project’s Achilles heel - Universal built a park full of prototypes with all the operational nightmares that came with them. But ride-for-ride, show-for-show, set-for-set, there was no contest. Disney built a half-day park for film and TV production that never quite showed up. Universal, to paraphrase company president Sidney Sheinberg, built a better mousetrap.

Park #2 would, if not steal, then at least share more guests with the rivals down I-4. Two parks versus three was an even-enough split to make a difference, but Universal was still on the back foot when it came to lodging - as of early 1991, zero hotels versus eight and counting - and extracurricular activities. There was no competition at closing time - Universal guests went home at the end of the day, but Disney guests never had to leave. If it truly wanted to compete, the new studio in town would need more than another gate.

Public relations manager Tom Schroder made the mission plain: “We know [visitors] are going to do other things and that’s fine with us, but we want them to stay here.”

“Universal City Florida” would cost $3 billion - quadrupling the cost of the original park with interest - and take a decade to complete. For Lew Wasserman, chairman of then-parent-company MCA, it was worth it: “We’ll be going head-to-head just like we’ve done with Disney in California for 25 years.”

The road from Cartoon World to Islands of Adventure is already well-documented, but the rest of the expansion is a story told mostly in the margins.

When the Marvel Entertainment Group signed the dotted line on March 22nd, 1994, Universal City Florida had already changed shape. Although most of the agreement was dedicated to the new park, legally defined only as THE SECOND GATE, the overall project description shed some light on the whole. The resort would annex the Hard Rock Café as-is, add four resorts instead of five, and make room for a golf course alongside the tennis club.

The contract also estimated 5 million guests would visit THE SECOND GATE in its inaugural season. It was a modest guess at the time - the other park racked up 7.7 million the following year - but Universal had every reason to play it safe.

Walt Disney World lost five million guests in four years, bottoming out in 1994 with a combined 28.9 million. This slide did not go unnoticed among investors still reeling from the failure of Euro Disneyland and the complete non-start of Disney’s America. After the death of Frank Wells, morale behind the scenes was no better. To sate the stock market and head off the competition, Disney let something slip.

In November of 1993, the company announced the addition of nine hotels, a sports complex, and a third waterpark.

In November of 1994, a “person close to the company” told the New York Times that the capstone of Disney’s new $2-billion expansion was a fourth gate, known tentatively as “Animal Kingdom.”

Universal was no longer playing catch-up; they were going to war.

The CityWalk equivalent, earlier pitched as the campus-themed “College Hill,” was officially announced as “The E-Zone” on November 19th, 1995. Negotiations were already underway with possible vendors. Early hopefuls included B.B. King’s Blues Club, the E! Entertainment Television Production Center, a Sega GameWorks, the 31,000-sqft Shaq’s Place, and Marvel Mania, a sister location to the first-last-and-only other at Universal Studios Hollywood.

The news came mere months after Disney announced their own chic expansion of the Village Marketplace, complete with name-brand blues venue.

In March of 1995, “The Resort at Universal City Florida” was reserved as a generic catchall for whichever hotel stuck first. Early contenders that survived more than one concept rendering included the Silverscreen Resort and the Royal Egyptian, based in no small part on Stephen Sommers’s coming Mummy remake. Within a few years, something funny happened to those renderings.

Early models for Universal City Florida turned the resort into an archipelago. Not streams, but rivers. Not lagoons, but lakes. The water taxis are an obvious descendent, but far removed from the originally intended grandeur.

By 1997, the officially released artwork was final enough to get two of the hotels correct - Portofino Bay and the Hard Rock - with the Royal Egyptian still hanging on for dear life. The E-Zone had already become CityWalk as of that March. The Universal City Florida title earned an official logo. The copy even promised an eventual six total hotels, a number the resort only hit in 2018 with the Aventura. But where would they go and what of the golf courses?

New parent company Seagram was confident enough in Universal’s growth, in “Project X,” to invest two steps ahead, even as it sold off assets to stay afloat. Theme parks were its surest thing after all, inspiring a $55 million investment in Spain’s Port Aventura and a $1.7 billion partnership for Universal Studios Japan.

The first-year attendance estimates were bumped up to 6 million guests, with quieter hopes of around 8 million.

Opening day was fast approaching. Construction crews were chipping away. All that was left to do was spread the word.