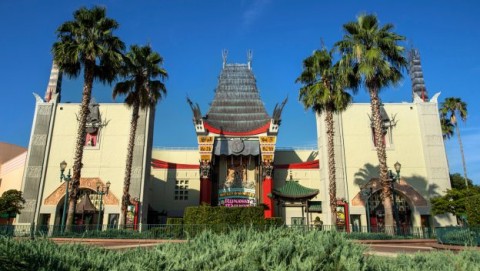 It was, is, and shall remain for the foreseeable future a half-day park.

32 years later, it has grown, but not by much. The official Walt Disney World website lists 17 attractions in the park. Some aren’t available, at least one is just an app, and a few temporary closures, like the Indiana Jones Epic Stunt Spectacular, aren’t listed at all. By contrast, the Magic Kingdom has 40. The comparably sparse Animal Kingdom, not counting its individual animal species, has 23 and a lot more room for stretching legs.

The additions of Star Wars: Galaxy’s Edge and Toy Story Land were big steps in the right direction. Even in the smallest corners of the Studios, change is coming. Pixar Place became, well, Pixar Place but loosely themed to The Incredibles. Muppets Courtyard only lasted a year as an official municipality, now reduced to the noticeably vague Grand Avenue. With the possibly permanent closure of The Voyage of the Little Mermaid, Animation Courtyard still proudly bears the studio arches despite having little to do with animation and less with production.

But the Star Wars and Toy Story expansions were announced at the D23 Expo in 2015 with an audible dot-dot-dot. They were only step one. There was a third major land coming, unnamed and soon after unmentioned. Given the current construction speed on Disney projects - the track for Tron Lightcycle Power Run was completed two years ago and there’s no opening date on the calendar - the geography of Hollywood Studios won’t be drastically changing for a while. It’s anyone’s guess as to when, but where is already a multiple-choice question.

There’s nothing wrong with Echo Lake. Compared to some of the sore thumbs to come, it’s thriving.

Before the pandemic turned it into a rest area, the Indiana Jones Epic Stunt Spectacular was still kicking. Both halves of the Hyperion Theater building are occupied, even if neither show is especially involved. Star Tours draws lines, even as the 30-year-shinier Star Wars land woos visitors a two-minute stroll away.

But take a look at any map and its days as-is are numbered.

Echo Lake, from Hollywood Boulevard to Grand Avenue, is a little smaller than Galaxy’s Edge. Add in any expendable facilities backstage or annex the Avenue and the difference in negligible. It’s the largest plot left that doesn’t eat up administrative space. Someday, this corner of the Studios will look unrecognizable.

The hottest, easiest, and oldest rumor is already taking up the biggest piece of it. Indiana Jones might finally get his ride. Surveys from 2018 hinted that Imagineering was working on an entire land, hypothetically slated for Disney's Animal Kingdom. For whatever reason, negative response or debunked source, that plan allegedly changed. Whether that means it’ll end up next to its Lucasfilm family remains to be seen, but it’s the natural place for him and a fitting tribute to the park’s past.

Attractions, in short supply though they may be, aren’t what might keep Echo Lake from going all at once, however.

Between the Lake and its neighboring alley, Commissary Lane, this corner of Hollywood Studios has three table service restaurants, two cafeterias, two snack stands, a lounge, and a dinosaur that sells ice cream. Closing all or most of that at the same time, especially in the park’s continued attendance crush, would spell disaster, no matter what replaces it. Both Galaxy’s Edge and Toy Story Land replaced real estate that guests weren’t using for much anyway.

It’ll be a shame to lose one of the last quiet corners in the park, but factoring in that build time, Echo Lake will survive more or less the same for another few years.

Any changes will probably start smaller.

When the first shot is fired, this’ll probably be the bullet.

Rumors have greatly exaggerated Indy’s demise since the early days. Print out the decades of forum posts promising updated stunts based on the rest of the franchise and they could wallpaper the Polynesian. What was a logistics move from day one - focusing on Raiders of the Lost Ark as the most iconic and most reproducible movie of the bunch - will seem to some like a missed opportunity until the day it closes.

It’s anyone’s guess if that day will come before or after the fabled Indiana Jones 5, if or when that day comes. It was allegedly supposed to come for Galaxy's Edge, until the plans changed.

But the time has definitely come and arguably gone for something new.

The amphitheater may seem big, but the workable footprint is much bigger. From the entrance billboards to Prospect Avenue, from the Adventure Outpost to the Backlot Express, there’s room for a modern E-ticket comparable to Rise of the Resistance. If the Express goes, that’s enough for a new restaurant, gift shop, or supplementary B-ticket.

There are two possible hitches in that plan, however, one practical and the other creative.

For years, Disney booked the Stunt Spectacular amphitheater for cheerleading competitions. In 2018, those competitions moved to a brand-new facility at the ESPN Wide World of Sports complex. Early this year, a prominent youth sports organization announced an end to their Disney partnership, moving their particular events off-property entirely. As a result, it’s been a while since the amphitheater was rented out, but it remains one of the few plug-and-play arenas on property. That value may be enough to keep the infrastructure intact and change the show itself.

The creative challenge is a full Indiana Jones land, if that’s what’s coming. Every Indiana Jones attraction so far has been built in an Adventureland or equivalent jungle. At most, in Paris and Japan, that brings the Adventureland quotient to two. Walt Disney World already has one in the Magic Kingdom and arguably several in the Animal Kingdom. A third, directly next to Galaxy’s Edge subtropical bazaar, might be an Adventureland bridge too far. Unless the hypothetical plans call for a twist on all earlier Indy attractions - Egypt is the most obvious alternative - the direct replacement rumors, trading one Jones for another, should be taken with a boulder of salt.

The sorest thumb in the Studios.

In any theme park, looks can be deceiving. Doubly so if that theme park was built to double as a working motion picture studio.

Grand Avenue looks secure for the moment. The recent additions of BaseLine Tap House and PizzeRizzo aren’t for treading water. Even Muppet*Vision 3D got a facelift, though the results are up for debate.

It’s a necessary junction between Galaxy’s Edge and the rest of the park, but what is it?

The equivalent would be Islands of Adventure adding Manhattan. It’s not a perfect metaphor - Grand Avenue is a salvage operation of MGM scraps - but it’ll only get better with age. Or at least, as soon as the Muppets finally move out.

No more Kermit balloon. No more ancillary animals in the fountain. No more Muppetational music in the background loop.

Pleas and petitions to save Muppet*Vision as a historical monument, Jim Henson’s last project, are match for the endless churn of theme park development. The exterior generalizing of the theater may be the first step to making it a 3-D flex space, similar to the former Muppet*Vision venue at Disney’s California Adventure.

It’s not an especially spacious area without the old Streets of America beside it. Tap House is just a growth off the Sci-Fi Dine-In Theater. The older buildings across Grand Avenue are cramped artifacts from a park less trodden. Short of connecting the Muppet*Vision facility to the Stage 1 Company Store, there’s no room for much beyond replacement.

But one look at a park map provides an obvious solution, even if it threatens overkill.

Grand Avenue is all that stands between Galaxy’s Edge and Star Tours. Although the nuts and bolts in those simulators are older than the Muppet*Vision projectors, an easy excuse to keep it running would be incorporation into the rest of its thematic homeland. Batuu is already set on retail, but that’d be enough room for the scrapped dinner show and a little something extra. That’s if Disney wants to add another galaxy to Hollywood Studios in the first place, a park already on the verge of identity crisis.

There’s always a possibility that Disney doubles down on Kermit and co., justifying the PizzeRizzo expense with a new Muppet attraction. But the company’s recent track record with the brand pretty well rules that out.

This refrain has echoed for years now, maybe even decades, but it bears repeating - get your cheap 3D tricks in while you still can.