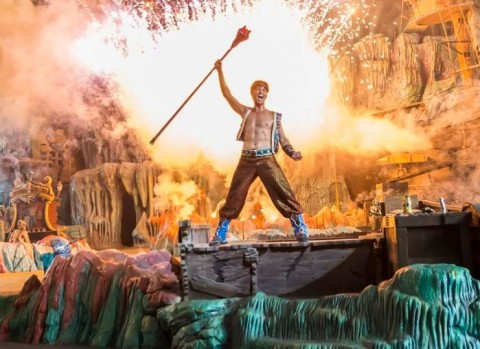 It was March 3, 2021 when Universal Orlando made an unexpected and delightful announcement: though construction had been "paused indefinitely" due to the COVID-19 pandemic, the creation of a third theme park – Universal's Epic Universe – was set to resume. We have yet to see how a year-long pause may have shifted Universal's spending, priorities, and intellectual properties for their new park, but we do know one thing...

Last year, we took some flack for suggesting that a third park might stretch Universal Orlando too thin; that the resort's two existing theme parks – Universal Studios and Islands of Adventure – have built up a wish-list of projects that they really, really need. Although not everyone agreed, we offered that it might make better sense to incorporate Epic Universe's themed lands into the existing parks rather than shift focus (and budgets) to a third. Perhaps proving our point just a little, today we've collected a list of FIVE completely empty venues at Universal Orlando, permanently closed (most before the pandemic) and just waiting for something new! What would you like to see in these spaces?

Despite its name, there's nothing particularly whimsical about the Toon Lagoon Amphitheater located in a relative No Man's Land wedged between the nautical Toon Lagoon and Marvel Super Hero Island. The 2,000 person covered venue with bleacher seating originally housed the Pandemonium Cartoon Circus, a song-and-dance comedy show starring the island's comic strip characters. That lasted less than a year before the theater became a "flex space" for seasonal BMX and extreme sports demonstrations, which ceased altogether a decade ago.

Especially when paired with the vaguely cartoon-themed "transition" space around it, it would make great sense for this underutilized property to be fully absorbed into Toon Lagoon, replacing the theater with a much-needed family dark ride. According to ParkStop, a few concepts have been floated for just such a concept, including The Secret Life of Pets, but the sequel's lackluster performance in theaters seemed to cool the brand's "franchisability" and likely any hopes of a big budget ride in Orlando. In our recent look at untapped intellectual properties perfect for the parks, we even suggested creating a mini-land themed to a DreamWorks property here.

An opening day attraction in Islands of Adventure's Lost Continent, the Eighth Voyage of Sinbad took all that Universal's known for – risky stunts, explosive effects, and some line-toeing comedy – and attempted to overlay it with Disney-esque design and storytelling. Did it work? Ehh... Okay, so Sinbad wasn't exactly a masterpiece, but the high-energy show was exciting... and after annexing a portion of its property to Potter, one of only two attractions left in the Lost Continent at all...

The Sinbad show officially folded in September 2018, leaving Universal with another 2,000 seat covered amphitheater abandoned just a few hunded feet from Toon Lagoon's. What's worse about Sinbad's is that it's in much less of a "flex space." It's very unlikely Universal will re-use the beautiful but highly customized set for a replacement show. Quite the contrary, it's likely it'll remain empty until an almost-inevitable outright replacement of the Lost Continent and its single remaining attraction, the Declassified Disaster: Poseidon's Fury.

Once home to the Wild Wild Wild West Stunt Show (from 1991 to 2003), the amphitheater between Universal Studios' Diagon Alley and World Expo was most recently home to Fear Factor Live. From 2001 to 2006, the NBC game show Fear Factor was a cultural phenomenon, inviting game show participants to partake in physical and psychological stunts ranging from physical endurance tests to nauseating culinary dares. Fear Factor Live was the perfect synergy, with three stunts (an endurance hang, a relay race involving a tank of eels and "rancid" octopus meat, and a high wire race) performed by actual park guests.

Of course, Fear Factor Live opened just as the Fear Factor TV show's rating plummeted. Against all odds, the show stuck around – sometimes full-time, sometimes seasonal – and in terms of lifespan, has even outlasted the Lost Legend: Kongfrontation! Fans have come to know the theater for its often-covered marquee as the theater is really closed more than open. Given its extraordinary proximity to London & Diagon Alley, it's long been assumed that eventually, the theater will be used as Potter expansion space, likely for a trip into the series' Ministry of Magic. But with rumors that the Ministry is (somewhat nonsensically) headed to Epic Universe instead, who knows? We count it as yet another place where Universal might do better to use its existing property than race to open a new one...

As part of the COVID-19 pandemic, Universal officially announced that the long-running A Day In the Park with Barney has had its last curtain call. Frankly, it was probably time... Barney & Friends was a hallmark of childhood for many Millennials and Gen Zers, but the PBS show ceased airing new episodes in 2010 – a very, very long time ago in terms of childrens entertainment. Unlike the very large amphitheaters elsewhere on this list, Barney's show was indoors and presented "in the round," housing several hundred guests at a time rather than several thousand.

But with the purple dinosaur's exit, yet another show space at Universal has been permanently abandoned. In this case, Barney's absence is actually just one piece of a larger puzzle, given that the surrounding KidZone is... well... a little outdated. While we'd defend the E.T. Adventure dark ride to our last breath, the honest truth is that Universal Studios' single kid-friendly land being centered around E.T., Woody Woodpecker, and Curious George in 2021 is pretty shameful... especially since Universal owns both DreamWorks (Shrek! How To Train Your Dragon! Kung-Fu Panda!) and Illumination (Despicable Me! Secret Life of Pets!) and has licensed Nintendo! Again, KidZone's current state – exascerbated by Barney's exit – has us wondering if Universal is really ready for a third theme park...

Once upon a time, the "Sharp-Aquos Theater" wasn't a theater at all. In fact, for a generation of kids, it was an icon – the Lost Legend: Nickelodeon Studios. When Nickelodeon switched from game shows to "Nicktoons" and sitcoms in the 2000s, their on-site, live-audience studio in Orlando became a liability. In 2007, the Slime Geyser came down and gates went up, separating the soundstage from Universal Studios and instead connecting it to the publically-accessible Universal CityWalk. The Blue Man Group set up shop.

Another victim of the pandemic, the Blue Man Group announced in 2021 that it would exit its relationship with Universal, meaning their last performances had unknowingly taken place a whole year earlier, in March 2020. The intimate 1,000 seat theater is now up for grabs. Josh Young at Theme Park University suggests that Universal is likely to reabsorb the theater into Universal Studios Florida's footprint (made a little more difficult now by the Hollywood Rip, Ride, Rockit coaster) and quickly install a tried-and-true special effects show from Hollywood.

Long term, though, we'll have to see what Universal chooses to do with this space... And all the other underutilized plots around their property. What do you think? What could take the place of these separate parcels? For that matter, does Universal's focus (and budget) shifting to Epic Universe mean we should just get used to dead spaces around the existing parks for now? Or do you trust Universal to continue to invest in "plussing" their existing parks outside the occasional E-Ticket? We'll see...