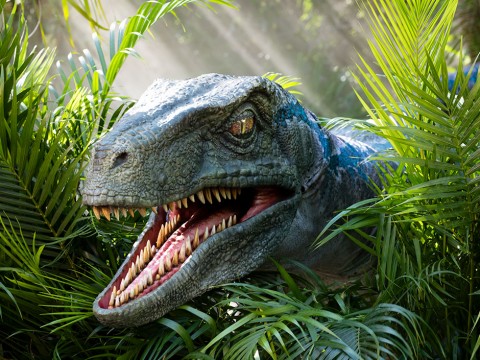 Every day, themed entertainment designers ask themselves and each other the same question: "What if?" In the so-called "Blue Sky" phase of design, there's no limit; no capacity; no technology; no budget. The idea is to dream big and let reality hem in the project's scope later. In this new Theme Park Tourist mini-series, we invite you to "Blue Sky" with us, and to reimagine a ride that could use a refresh.

Last month, we pitched a retheme of Rock ‘n’ Roller Coaster, turning this Sunset Blvd. E-Ticket into a 1930s head trip into The Twilight Zone. This month, we’re wondering what it would be like if Disney’s ExtraTERRORestrial Alien Encounter was reborn at Universal Orlando, and merged into the Jurassic World mythos…

When Universal’s Islands of Adventure opened in 1999, the “world’s most technological theme park” at last proved Universal’s credentials in building authentic theme parks free of the soundstage-stylized “studio” aesthetic. In fact, we celebrated Islands of Adventure in its own mini-feature for the way it preempted the era of “IP” lands… and smartly selected timeless, intergenerational, literary ones over lands themed to hot movie franchises destined to lose relevance over the decades.

In fact, just one of the park’s lands was themed to a movie, and it was a worthy one: Jurassic Park. Riding on the success of the Lost Legend: Jurassic Park - The Ride that had debuted in Hollywood, Islands of Adventure would feature an entire Jurassic Park land. Rather than a solo ride, Florida’s Jurassic Park would be “real,” anchored by an in-universe Jurassic Park River Adventure but supported by a whole lot more.

When it opened, the land contained the iconic Discovery Center mini-museum, the Camp Jurassic family play area, and the Triceratops Encounter, a “live” interaction with one of three real Triceratops under the watch of Jurassic Park’s veterinary team. Famously, these drowsy animatronics would respond to guests’ touch, sneeze, and even pee, all while a Jurassic Park animal care specialist waxed poetic on the park’s veterinary care.

Two further attractions were once planned for the park - a Jurassic HelicopTours simulator (see background of concept art, above) and a Jurassic Park Jeep Safari that would doubtlessly mix an off-roading outdoor adventure with dark ride scenes. However, the park’s first few years saw disappointing attendance, cancelling any plans. Ultimately, the expansion pads allegedly set aside for each were taken by Harry Potter and the Forbidden Journey and Skull Island: Reign of Kong, respectively. Fan-circulated dreams of a “nothing goes horribly wrong” family dark ride through the Discovery Center’s labs never became reality, either. Meanwhile, the Triceratops Encounter was replaced by 2021’s VelociCoaster, leaning into the trendier Jurassic World films and their focus on the films’ Velociraptor.

Which got us to thinking… If you concede that Jurassic Park is still a viable franchise, but that the land itself has been unfairly restricted by Potter and Kong, couldn’t it be that an attraction with a small footprint, a viral excitement, and a killer concept could be a major boost to an island based on a brand in the midst of a raptor-centered resurgence?

The glowing blue marquee of the Raptor Encounter has taken on a whole new meaning. Now, your visit with Blue, though, is merely a preshow. Perhaps being within inches of the snapping jaws of an unpredictable predator has left you slightly shaken… but it’s only the start.

Now, the tour proceeds deeper into the island jungle, beneath enormous banana plant leaves, sunlight scarcely making it to the paths weaving along rainforest underbrush... You can hear the low hum of electricity emitting from towering fences that converge from either side - tighter and tighter. Unlike the fairly benevolent Blue we just met, sounds from the other side of the barrier signal a very different velociraptor… one whose crazed, hissing snarls underscore a continuous loop of claws against metal, crackling electrical shocks, a thud, and then claws one more…

Eventually, the path leads to a small, auxiliary access door, where a Jurassic Park team member excitedly ushers guests inside. It’s a sponsor’s lounge like the World’s Fairs of old, decorated with corporate logos (Barbasol?!) and plaques with a private window looking out on the first turn of the River Adventure.

This usually-backstage VIP lounge and facility has been connected to the park’s midway through a makeshift queue for a momentous occasion: the hatching of a rare velociraptor. A Jurassic Park scientist explains to the assembled group that most reptiles abandon their eggs shortly after laying them - or after the moment they hatch, at the very most. Thus, the park’s animal care team have isolated this egg to ensure its wellbeing under strict protocols. And we, of course, are invited to witness it firsthand...

After establishing the need for silence, guests are led into a circular, darkened meeting room, with screens around the circumference offering sponsorship opportunities and new potential attractions available for naming rights. But today, our attention is in the room’s center, where seats have been arranged in concentric circles staggered across three tiers, all gazing inward at the egg in question… and with InGen-approved safety harnesses to ensure no one disrupts the delicate hatching process. As guests are seated, the lights lower and the in-room scientist begins a process of ultrasonic vibrations meant to hasten the hatching…

After a tense moment, the central egg cracks and out emerges a sweet, gray velociraptor pup, blinking against the harsh spotlights. It slowly and adorably breaks away the remnants of shell holding it in, then, with an inhale, squeaks out its first ever chittering barks. The scientist turns on an amplifier, allowing its newborn chatter to echo through the room… so much so that the baby is startled by its own sound, sweetly falling backwards in surprise. It’s a heart wrenching moment as the miniature animatronic purrs and squeaks, sneezing into the dusty air of the auditorium… but then… in the distance, its call earns a response…

That raptor we heard outside? The one clawing at the building’s wall despite repeated electrical shocks? It’s made it in. The muted sounds of its shrieking grow closer and closer down the hallway we just entered through, even as alarms blare outside. Guests are asked to remain calm. But it's too late... with a final, terrible screech of shredding metal, the lights begin to flicker as the egg's heating lamp powers off. The doors into the theater are suddenly smashed inward, with red warning lights in the hall revealing the silhouette of a velociraptor... After another moment of darkness, the whirring of backup power momentarily flashes red warning lights as the snarling mother lifts itself toward the newly hatched baby, touching noses.

Then... darkness and silence fall across the theater.

What follows is an extrasensory thrill ride with practical effects creating the illusion of the raptor stomping through the theater, sniffing at guests' necks, growling in their ears, and more. This modern reinterpretation of the Lost Legend: Alien Encounter could be a multi-sensory cult classic, using 3D audio, in-seat effects, atmospheric sound, live actors, and Audio-Animatronics to give guests the kind of Raptor Encounter they never expected... Of course, thanks to a quick-thinking Jurassic Park animal scientist, a remote call would eventually draw the raptor away, with emergency power restored... and the nest empty at last. Perhaps exiting guests could even pass by the returned raptor in its habitat, now at peace with its baby.

What are your thoughts for adding a new attraction to this land? How can Universal Orlando cash in on the popularity of Jurassic World to expand its landlocked Jurassic Park island? Is an extreme sensory theater show the solution, or should Universal aim closer to the family demographic offered by a less chaotic dark ride? Or for that matter, is it worth re-theming Reign of Kong to the long-lost Jurassic Jeep Safari? What are YOUR thoughts for adding new dinosaur adventures to Islands of Adventure?

As a huge fan of the Jurassic Park franchise and a huge Universal fan, I think this pitch is fantastic. I went on Alien Encounters as a 11 year old child and was absolutely terrified. It was an experience I did not ever want to repeat, but hearing your idea morphing into a Jurassic encounter is awesome!

I'd love to see the jurassic jeep safari.

That sounds like an awesome ride. 10 out of 10 would stand in line to ride. In the Florida heat even.