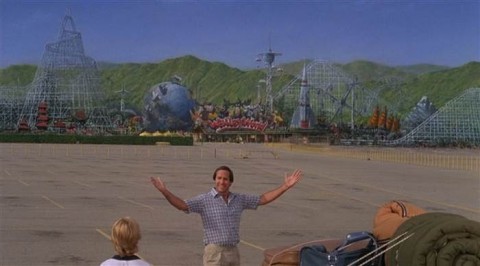 Setting movies and TV shows in theme parks is almost a hat on a hat, one layer of fantastic artifice over another. It doesn’t happen all that often, likely due to budgetary restrictions and similar production headaches, but when it does, the result is usually something special. There are, however, too many fictional parks to tally in a list like this, so some criteria needs set. Each entry needs a little abstraction. Adventureland’s Adventureland is really just Kennywood. Zombieland’s Pacific Playland is really just Wild Adventures with an extra haunted house, courtesy of Netherworld. The case could be made that Escape From Tomorrow’s Florida-California Disney hybrid counts as its own nightmarish beast, but it’s hardly make-believe. With these fast and loose rules, in no particular order or exception, here are six parks from screens big and small worth visiting.

National Lampoon’s Vacation remains a seminal text on the psychological warfare of family road trips. It suggests a higher power, a travel agent god with no touch for customer service. When vacation goes wrong, it’s never a single flat tire or carsick kid. It never rains on the way to Disney World, it hurricanes.

But nobody would make such sacrifices without a properly glorious Shangri-La at the end of the interstate.

Walley World is Six Flags Shangri-La. It’s Magic Mountain and then some. The matte painting over the entrance plaza is too wondrous for cruel reality. A cast of seven woodland characters bid welcome from above, all of them immediately distinct despite only one of them getting a name. Studying the background reveals a towering haunted house, a skyway support, and the toothpick frame of Screemy Meemy.

From across the parking lot, Walley World looks even wilder.

A globe foretelling the size and stature of Downtown Disney’s Planet Hollywood is crash-landed to the left of the main gates. A man-made mountain shrinks in awe of a rocket awaiting takeoff. The tallest coaster seems to bump the lower mesosphere.

It’s enough of a first impression that you don’t mind when the inside turns out to be Magic Mountain with a rewrite - Screemy Meemy and Whipper Snapper beat Colossus and Revolution any day of the week.

But of course, it would be nothing without its Mickey Mouse, without Marty Moose. It’s not for nothing that this cartoon emcee, voiced in the original by director/ghostbuster Harold Ramis, weaves his way through the rest of the franchise. A t-shirt in European Vacation. The eggnog mugs in Christmas Vacation. Marty even got a facelift for his grand return in the 2015 reboot, in which Six Flags Over Georgia played Walley World.

The Goosebumps multimedia empire is still going strong. R.L. Stine’s kiddie compendium of doom now includes 235 books, seven video games, two movies, and a TV series. And yet, there was only ever one theme park attraction.

The Goosebumps HorrorLand Fright Show and Funhouse ran for just one year on the backlot of Disney-MGM Studios. It was always planned to be temporary - no more complicated than a live show and mirror maze - but that short life only underlines the tragedy that its most famous haunting ground hasn’t been properly realized.

Everyone who only had enough money to buy erasers at the Scholastic Book Fair knows the Tim Jacobus cover. A slime-green gargoyle peers over a welcome sign scarred by his claws. On the horizon between his unblinking gaze and a dead oak tree, HorrorLand.

One Day at HorrorLand, the 16th book in Stine’s original line-up, was catnip for its intended audience. Foreboding, maybe even scary, but completely irresistible none the less.

To be fair, it’s a miserable place. Early attractions include the Coffin Cruise, a log flume ridden in sealed caskets, and the Bat Barn, which is pretty self-explanatory. The employees aren’t called cast members or team members, but “Horrors.” They also happen to be actual monsters.

The reckless endangerment was infectious enough to spawn a sequel, two video games, a board game, a lunchbox, two episodes of the TV show, and its own series of follow-up novels. Early announcements even named the second film, Goosebumps: HorrorLand.

And yet there’s not even a HorrorLand ride. No waterslides filled with loose axes. No neighborhoods of werewolves or vampires. No zoos inhabited by unholy things. Not even a single animatronic Horror.

It might not be the safest amusement park in the world. In fact, it’s probably the deadliest, and that’s why overgrown kids of all ages still remember their visits fondly.

The 2002 Scooby-Doo movie has a strange aftertaste.

It has everything that Mystery Inc. fans could possibly want, including the arrest of Scrappy Doo. But it also has a little...something extra. Some spooky scenes teeter on disturbing. Some jokes are aimed clean over the heads of anyone still waking up on Saturday mornings to tune in. The plot, something Scooby-Doo famously never changes, overcompensates with meta-commentary on the show’s cheesiest tropes, including the arrest of Scrappy Doo.

The reason for this one-of-a-kind flavor is that the movie was written as a PG-13 and earned an R from the MPAA before getting whittled down in post-production to a studio-friendly PG. The sexual tensions that go unmentioned, the stoner subplot that survives as a one-off pun, the toothy arm creatures that sprout from prop turkeys like something out of John Carpenter’s The Thing. All leftovers of a more mature, more mean Scooby-Doo.

That includes Spooky Island, as much a nightmarish theme park as it is a spring breaker’s dream.

Filmed in part at the Tangalooma Island Resort and Warner Bros. Movie World, the resulting mishmash is like a Sandals designed by Rolly Crump.

Everything else that can be a skull is a skull. A bony mosaic pulled straight from Eyes of Hell is now a 100-foot monument with waterslides snaking out of its eyeholes. The park’s prerequisite mountain, the Splatterhorn, is an even bigger, meltier face. All the rides spin at worrying speeds and dizzying heights. It’s the margin of a monster kid’s chemistry notebook blown up to scale at a cost of $84 million.

The Castle dark ride, despite its underwhelming name, is an all-timer. Murderous suits of armor. Sentient hot dog links. Massive swinging blades that would make Poe blush. A dead-end turn into a bunch of sharp objects. It’s a good enough facsimile of actual Laff in the Dark fun that a wild-mouse version of it was subsequently built at Movie World.

But alas that’s all that’s come of Spooky Island. This live-action take on Scooby-Doo lasted one theatrical sequel and a few TV prequels before an animated reboot wiped the slate clean. Fan petitions come and go, usually demanding Universal build it to scale somewhere, but the sell-by date was probably about 15 years ago.

At least we’ll always have the crystal skull disco ball.

Westworld, Michael Crichton’s 1973 techno-chiller, is too easily overlooked as a blueprint. For the novelist’s own Jurassic Park. For modern killer robots like The Terminator. For the decorated prestige series loosely based on it.

It could be Crichton’s track record as a director clouding out his first theatrical release, but Westworld deserves reappraisal.

Circuitboards and Yul Brynner aside, it saw the future of vacations coming.

Upon arrival at Delos, guests choose from three elaborate “lands” - Western World, Medieval World, and Roman World. Each of them is airtight, a perfect recreation of their respective themes and eras. They are all populated by the best robots money can buy, which as of 2021 still cannot be bought with money. These so-called “hosts” are completely indistinguishable from humans aside from their rubbery hands. They can be seduced, shot, and goaded into high-noon showdowns.

The appeal is plain - Grand Theft Auto: Renaissance Fair. But besides the expected degeneracy that comes with the territory, it’s a kind of entertainment still on drawing boards today.

The closest mainstream equivalent is Disney’s Star Wars: Galactic Starcruiser. It walks a fine line between elaborate resort and improv exercise, enlisting visitors in a narrative and keeping them involved for the length of their stay. The other players are flesh and blood. Press releases haven’t yet specified whether or not murder is allowed. But it’s not too far from Delos.

In fact, Galactic Starcruiser is a pretty close cousin to Futureworld, from the 1976 sequel of the same name. After the rampage that ruined the original resort’s wild west, the company replaces it with a land themed to an orbiting space station.

The Disney difference is that, unlike Delos, they will not be secretly cloning guests while they sleep. For that privilege, Starcruiser passengers will pay about $100 more per day than the $1000 Delos visitors did in 1973.