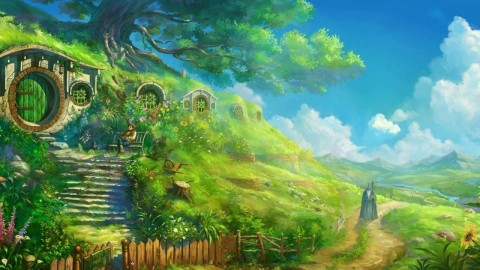 For at least the last few decades, multimedia companies like Disney, NBCUniversal, ViacomCBS, and WarnerMedia have been engaged in an all-out war. The goal? Purchasing, licensing, conglomerating, trading, and protecting the most precious resource of the 21st century: intellectual property. One battlefront in the ongoing IP War has been Disney and Universal’s respective theme parks, where a new era of “living lands” has plucked places right from the highest-earning franchises in history like Harry Potter, Star Wars, Mario, and Disney Princesses to go head-to-head in billion-dollar theme park projects.

That’s not to say that money alone tells the story… After all, Hello Kitty is the second highest-grossing media franchise in history (with $84 billion in revenue) but few would suggest it would resonate with American audiences or fit into U.S. Disney & Universal Parks. Likewise, while the Peanuts $16 billion revenue makes the franchise an intergenerational American icon, it’s not quite a “living land” contender (separate from its licensing by Cedar Fair).

I mean, in retrospect, isn't Nintendo so obvious? Such a genius, brilliant, timeless coup for Universal? Why didn't we see it coming?! And more to the point, what's next? So as battle lines are drawn and companies consolidate content armies, finding IPs that are “left” isn’t an easy task… We can probably agree that in order for an IP to inspire a complete “living land” in California or Florida, there are a few best practice requirements to keep in mind:

At the end of the day, our look at what Disney or Universal’s next big licensing deal could bring is, of course, just for fun, and conveniently ignores the billions of legalities, licensings, and loopholes that would be required to bring some of these properties to life. Consider it a “Blue Sky” exercise in armchair Imagineering! Consider how you could imagine these properties or others like them fitting into Disney and Universal Parks…

Though a ton of excitement has surrounded Universal’s licensing of Nintendo for its theme parks, one IP that’s highly associated with the Japanese gaming company has only remained a rumor: Pokemon. By the numbers, Pokemon is the biggest media franchise in the world with over $100 billion in revenue since just 1996! (By comparison, Star Wars has earned about $70 billion since 1977.) However, Nintendo itself owns only the brand’s trademark, with the copyright held by The Pokemon Company (co-owned by Nintendo, Game Freak, and Creatures Inc.). Insiders at Parkscope say that Universal has drafted plans to add Pokemon to its parks separate from the overall Nintendo license, so we’ll see!

Our ideas: Longstanding rumors hold that Universal would like to replace Universal Studios Florida’s tepid Kidzone with an immersive land bringing Pokemon to life, and we can perfectly picture that space becoming an urban city of Pokecenters, shops, and cafes with a Pokemon gym reigning over it all. Guests might use a purchaseable RFID Pokeball to "store" Pokemon they capture in an E-Ticket ride and earn badges by battling across the land.

Though we’re usually pretty protective of Islands of Adventure’s “timeless, literary” lands, we can easily see Pokemon overtaking Toon Lagoon, too, where it might become a tropical city (modeled after Sun & Moon's Alola region). We imagine guests there riding an Omnimover-based "Pokemon Snap" ride, capturing photos of really-for-real Animatronics hidden throughout the outdoor course and popping up from the park's Great Sea.

2. Lord of the Rings

The Middle-Earth franchise (made of the Lord of the Rings and The Hobbit properties) actually has a whole lot in common with Harry Potter. Both are $20 billion+-earning franchises based on books and anchored by early-2000s film series that have been elevated into a sort of pop culture timelessness. It’s hard to imagine either film series ever being “rebooted” or “remade.” They’re simply the definitive big screen retellings, establishing a cast, score, and setting that will forever be the imagery associated with their respective stories. Both even hinge on “villages” and settings that fit beautifully into in-universe foods and shopping.

In other words, like Potter, Lord of the Rings is that rare beast for theme parks: it’s intergenerational, widely known, timeless, and hugely adaptable into a “living land.” When filmmaker James Cameron allegedly got a little too bossy in the development of Pandora: The World of AVATAR, Disney reportedly flew out the rights-holders for Tolkein’s estate to tour Animal Kingdom. As the story goes, the move was about proving to Cameron that Disney could and would go elsewhere if he didn’t cooperate more than actually pursuing the rights to the story. Still, there’s no denying the fantasy series could’ve worked beautifully as a modern IP to revive the never-built Beastly Kingdom if it had gone forward.

Our ideas: It’s tough to daydream about Lord of the Rings without being restricted by reality. Though it’s a perfect conceptual fit for Islands of Adventure, relegating it to the remains of the Lost Legend: The Lost Continent would be like trying to fit an elephant into a suitcase. The point of Lord of the Rings is that it’s a quest, and making that journey from the Shire to Bree to Rivendell to Lothlorien to the Misty Mountain to Mordor to Mount Doom real could be an entire 100-acre park unto itself… one best left to a real land you have to walk through and not a simulator. So where would a Lord of the Rings land be set? That's the issue...

Star Trek is easily one of the most recognizable franchises in modern media, but it’s also one of the least utilized in theme parks. Partly, that’s because the brand is owned by ViacomCBS, whose few current theme park licensing ventures lack the price tags of Disney and Universal’s best. Star Trek lands have been beautifully concepted, but always in relation to those “that’s-never-getting-built” parks announced and then quietly cancelled for the Middle East or the UK. Right now, Movie Park Germany has a Star Trek ride, but in the same vein as Six Flags, it’s merely a steel coaster with a Star Trek station and name.

Like Star Wars, it would be difficult to anchor Star Trek to a single location or even a particular starship given the many series, reboots, and films that make up its 60 year history. Just choosing between an Original Series and The Next Generation land would divide the fandom (see also, Star Wars). There’s also the lingering problem of Star Trek’s relative pacificity, with a focus on discovery rather than rebellion; peace over war. It’s hard to imagine a reality where communicators fly off shelves like Lightsabers, or where E-Ticket rides have nothing “go horribly wrong”. The better model is probably Las Vegas’ closed, niche STAR TREK: The Experience.

Our ideas: Some insiders alleged that a Star Trek land would be one of Universal’s big anchor IPs of its in-development third park in Florida, but when Epic Universe was announced, there was no sci-fi centered land at all. Now that the pop culture boon of J.J. Abrams’ Star Wars-like Star Trek reboot film series has passed and the franchise is back to spin-off series on Paramount+ (Discovery, Picard, Lower Decks, Prodigy…), it’s easy to wonder if the time just isn’t right anymore to bring Star Trek to life.

When fans dreamed aloud of what Universal might do with its licensing of Nintendo, four big brands came to mind: Mario (confirmed), Donkey Kong (confirmed), Pokemon (see above), and Zelda. The high fantasy 64-bit land of Link is practically perfect for a theme park, where castles, villages, temples, and the backdrop of a mountain range would at last give Universal a land on the scale of Disney’s “Natural” Wonders.

Our ideas: It seems obvious that the Realm of Hyrule would be a theme park coup where guests would queue for village pubs and armories, play purchasable Ocarinas to activate interactive effects, wander through dark forests alive with sprites, and descend into water temples for dark ride quests to the Triforce. You can picture a land of high ropes courses, river rafts, sword fights, hiking paths along mountain ranges, and more. In fact, Zelda is one of the few properties we can imagine truly taking the place of Islands of Adventure’s Lost Continent, fulfilling its “mythological” piece in the park’s puzzle. Though, there is another…

Thanks for the feature of my work!