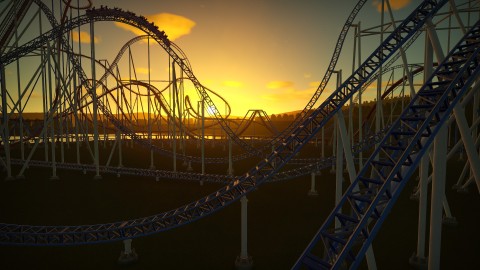 There’s a moment that comes in every Planet Coaster session, whether or not you see it coming.

Sure, the objectives change. Build a coaster of X length, with Y inversions, and a vomit grade somewhere under Z. More money. More guests. Fewer loans. Adjust as needed for the bronze, silver, and gold medal challenges. Earn

But it still happens.

Maybe when you’re tweaking the color of rosebushes to best complement the lantern light of a bumper car queue. Maybe when you’re sculpting the cave of a proper log flume splashdown and testing out which boulders look the most like teeth. Maybe when you’re fine-tuning the peak of that mile-high dive coaster so the trains glide through the next Immelmann like its fighting ace namesake.

You’ll forget all the objectives, all the complaints about bathroom cleanliness, and all the canvasses yet to come.

Suddenly you’re an artist in a strange medium, left to your own devices and the lonesome folk soundtrack.

It’s a high not even the immortal RollerCoaster Tycoon can match.

Frontier Developments broke into the virtual theme park business in 2003, with expansion packs for RollerCoaster Tycoon 2. These releases, Wacky Worlds and Time Twister, marked the first time series mastermind Chris Sawyer wasn’t directly involved in the design process. As the prospect of a Part III loomed, Sawyer decided to focus on a new game of his own, Locomotion, and remain involved only as a consultant. RollerCoaster Tycoon 3, the franchise’s evolutionary leap to the third dimension, would be entirely Frontier’s baby.

17 years later, the jury is still out on that one.

So said GameSpot in 2004: “If not for some of the glaring bugs, Frontier would have delivered a truly excellent sequel to a beloved franchise.”

It preserved the formula down to the grid-based construction and (now-optional) isometric view, but the suddenly infinite array of possibilities allowed for a suddenly infinite array of problems. Instead of the slow-building difficulty of previous titles, the earliest scenarios threw players in the deep end. Smooth terraforming didn’t play well with a landscape made up of little squares. Guest taste was more fickle than ever and money more scarce. The fact that it demanded comparatively luxurious hardware and still came bundled with a host of glitches did it no favors, either.

RollerCoaster Tycoon 3 might’ve been just as much fun as its predecessors but, in just about every possible way, it was a whole lot harder to play. Reviews for last year’s Complete Edition follow a similar refrain - addictive as ever, but you kind of had to be there.

Planet Coaster feels like an overdue, overhauled follow-up to that sequel specifically.

The lineage was supposed to be a lot clearer. Frontier called it Coaster Park Tycoon until a frank re-assessment of the subgenre changed course. Studio head David Braben put it simply: “It comes with too much baggage.”

RollerCoaster Tycoon World, conspicuously released one day before Planet Coaster, is all anyone needs to see his point. Eurogamer, which gave Planet four stars to World’s one, called it, “a celebrity impersonator trying to sell his act at said celebrity’s funeral.”

Tycoon is now Tycoon in name only, save Sawyer’s remastered Classic edition.

The look lives on in Parkitect.

The spirit lives on in Planet Coaster.

From the opening Frontier logo ruined by the antics of globular mascot, King Coaster, the game takes it easy. RollerCoaster Tycoon 3 veterans will feel right at home with the sky-blue menus and cartoonish custom avatars. For any new to the genre, it’s still a breeze. Trust the sighing choir in the background.

If all else fails, rely on the tutorials, but it’s tough to get too stuck in career mode.

All-in-all, there are seven chapters, each with three parks, all tied around one of Planet Coaster’s mascots. A pirate, a princess, a robot, a dinosaur, a cowgirl, the King himself, and a RoboCop hybrid of police officer and hamburger patty. New chapters only unlock with medals won in earlier scenarios, but it doesn’t take a flawless management record to see them all.

Some call to mind traditional amusement parks - Oak Island, Miss Elly’s Tower - and others swing for the fences of suspended disbelief - Golem Rampage, a sci-fi sprawl in the wake of a petrified kaiju. They all have their charms and challenges. All of the playgrounds are more or less created equal, but players will soon discover which they’d prefer to keep developing past their objectives.

I got pleasantly attached to more than a few.