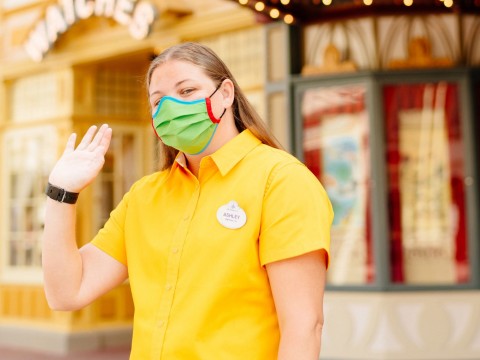 Anxiety is the ultimate vacation saboteur.

It’s the tension that upends the fun, the hijacker that turns Disney magic to nail-biting stress. Anxiety has proven one of the toughest challenges of this generation, and it’s only gotten worse in the midst of a global pandemic that has dramatically changed the way we are able to travel. During a time when many people crave a fulfilling vacation more than ever, is there a way to stop anxiety from seizing control in the middle of a trip?

I struggled with severe anxiety for over ten years—social and generalized anxiety was the official diagnosis. Many basic situations like shopping for groceries, calling for pizza, attending classes, parallel parking (okay, that one’s pretty normal), and even vacations caused my mind to kick into fight-or-flight mode at the worst of times. My brain flooded with stress and alertness, and I lost my ability to reason and function soundly until the tortuous episode (e.g. anxiety attack) had passed.

If you’ve seen the movie Inside Out, you can picture anxiety like one of the characters from that cast—it’s essentially what happens when a part of your brain (the amygdala) that is trying to protect you from danger seizes control, diverting resources to get ready to fight, flee, or freeze. In some cases, this mechanism connects to the concept of wisdom—if you’re being attacked by a bear, you do need to be able to quickly react to escape danger.

You see, anxiety is something of a poor judge of situations. It attempts to predict the future to assess potential threats—usually, based on kernels of truth. Anxiety is fear of things that have not happened yet based on what might happen. It’s such an overwhelming response, that it can override wisdom, hope, happiness, and reason for fear of what may come. Even if the threat is genuine, anxiety often cripples more than it enables, catastrophizing instead of problem-solving.

Don’t be ashamed if this sounds familiar—if you’re reading this, you’re among friends who have experienced the same thing…

I am not a psychologist (and therefore cannot give official medical advice), but I am someone who came out on the other side of being ruled by anxiety—I no longer suffer under the effects of those disorders. When I do get anxious, I know how to respond and adapt using tools I learned through counseling and perseverance (and most of all in my personal case, faith). This has not only helped me be able to live my life, but it has allowed me to banish anxiety from sabotaging my Disney vacations.

Want to do the same? Here’s a few tips that can help drastically reduce stress from your next vacation to Disney parks or beyond…

1. Plan what you can

Anxiety is often a response to feeling like a situation is out of control—it’s a reaction to the unexpected or overwhelming. If you know you trend towards anxiety, one of the best tools you can use when getting ready to go on a vacation is to plan what you can.

Many people assume that Disney parks are always stressful and busy, but this isn’t necessarily the case—for one thing, if crowds stress you out, do some research into what times of year the parks are less hectic. Right now, Disney parks are capped at 35% capacity. While that’s a pretty low number compared to Disney’s pre-pandemic busy days, I wouldn’t recommend that someone who struggles with anxiety visit somewhere like Disney’s Magic Kingdom on a full-capacity day (Disney’s Hollywood Studios has these days more often, but it hasn’t felt as stressful on our previous high-capacity visits).  These are generally going to fall on holidays and their corresponding weeks, major school breaks, and weekends. We don’t know enough to guess what summer is going to look like this year, but historically, it can be a busy time (not to mention hot and humid).

While winging it on a Disney vacation can be fun for some, you can reduce anxiety by planning what you can. Pick a resort or place to stay that is nearby so you have a retreat to return to (some of Disney’s resorts may be ideal, for example, due to ease of access). Make dining reservations early so you have one less thing to worry about. Oh, and definitely get tickets and make Disney Parks Pass reservations ahead of time—buying tickets at the gate is not a good idea on the best of days, but during this unusual season, you will want to make sure you’ll be able to get into the parks since reservations are required for the foreseeable future.

2. Build buffers into your day

Anxiety can sometimes be a reaction to feeling like we don’t have enough time—we feel a sense of conflict between what we want to do and what is actually possible. Maybe an unexpected shift in circumstances (e.g. a ride closure, inclement weather, etc.) forces you to change plans in the middle of the day.

Building buffers into your day can help reduce the stress-effect of unexpected changes.

Planning a day at Disney parks isn’t nearly as rigid an affair as it’s been in years past—Fastpass+ is no longer the immovable spine of scheduling. While dining and experience reservations still provide some fixed points to work around, you may find yourself adapting on the fly more often.

Instead of scheduling every minute of your day, purposefully schedule buffers into your plans—extra space in the schedule in case a queue is long, you want to try something different, or even if you just need some time to recoup. Buffers reduce the impact of “Murphy’s Law” moments by allowing you space to adjust. It’s purposeful flexibility so something going wrong doesn’t feel like a house of cards toppling. It also leaves space for you to recover if anxiety starts creeping in and you need to take steps to get grounded (more on that in a bit).

3. Know your way around before you arrive

Video: YouTube, Jett Farrell-Vega (@My Kingdom For a Mouse - Glimpses of Disney)

Just like anxiety can be a reaction to the unexpected, it can also be a response to the unfamiliar. Just knowing your way around somewhere as convoluted as Walt Disney World can make a big difference.

If you trend towards anxiety, I don’t recommend visiting Disney parks blind to what to expect. Before your trip, familiarize yourself with the layout of the parks. Read articles with details about what the parks are like right now (we recently did updates both for Magic Kingdom and for Disney’s Animal Kingdom), and watch some videos (shameless plug for my bonus-content YouTube Channel) to build that sense of familiarity. Virtual tours of the parks and even rides can be helpful as well.

A few things to be aware of—Walt Disney World has gone through a lot of changes over the course of the past two years. If you haven’t visited in a while, you’ll want to get the latest information on park layouts. Future World in Epcot, for example, is extremely confusing to navigate right now due to construction barricades throughout the entire park. Disney’s Hollywood Studios changed after the additions of Star Wars: Galaxy’s Edge (which has limited signage) and Toy Story Land. Disney’s Animal Kingdom is famously easy to get lost in on the best of days, particularly in the World of Pandora. Whatever source of information you use, make sure it is up to date.