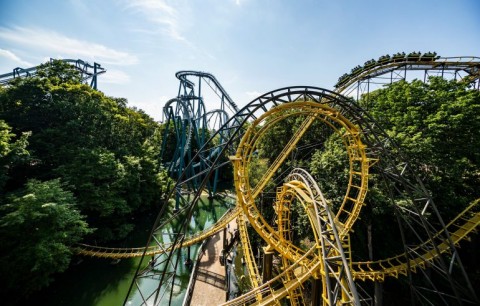 Vacations are being planned. Vaccines are being injected. 2021, or at least the second half of it, looks promising. The Big Two - Disney and Universal - will be seeing plenty of hotel bookings and ticket scannings as the coast continues to clear. They are as close as this industry has to monoliths, their real estate more resilient than some natural wonders. Regional amusement parks, on the other hand, will be facing an uphill battle for a while longer. The same basic philosophy applied to other businesses these days - order from a mom-and-pop pizza place instead of Papa John’s - could help them out in the long run. So here, in no particular order or geographic concentration, are six regional parks worth considering for vacations to come.

If you pass a giant plastic Kris Kringle, you’re in the right place, though there’s one at the city limits and another the post office so you might still be lost.

The sleepy little town of Santa Claus, Indiana, came before the park, but it was Holiday World that put it on the map. Founded in 1946 right before a boom of similar roadside attractions themed to the North Pole, the former “Santa Claus Land” has grown into a pilgrimage for any self-respecting coaster enthusiast. Their three woodies have charted in Amusement Today’s Golden Ticket Awards since their respective openings and the latest of them, The Voyage, holds the record for most airtime of its kind at 24.3 seconds. Their latest addition, Thunderbird, remains the only launched wing coaster in the United States.

But trophies can be deceiving.

Holiday World is a surprisingly, refreshingly small. Those four coasters are the only coasters, save a kinder alternative for kids. The rest of the dry amusements would feel at home on any carnival midway. A miniature train runs laps around fairy tale dioramas. Even the park’s Sally shooter, Gobbler Getaway, feels homemade.

Splashin’ Safari, regularly counted among the best waterparks in the country, feels just as cozy and comes included with admission.

What truly sets Holiday World apart, though, is that Midwestern hospitality. In addition to the slides, parking and soft drinks are on the house. They may be minor concessions, but they’re profound in practice. You can watch guests hesitate in real-time at any of the park’s free and unattended soda fountains.

What other park promises that kind of entertainment?

The very existence of Dollywood sounds like a sitcom joke and yet it outlived every possible punchline. Helps that the park’s namesake has a better sense of humor about it than anybody.

Formerly a sister outpost to Missouri’s Silver Dollar City, the park found its most enduring inspiration in 1986 when country legend Dolly Parton bought a stake in it to bring more jobs to her hometown.

These days, Dollywood is an oasis in the Smokies. A sprawling amusement park. A picturesque waterpark. The “Best Amusement Park Hotel” in the country according to USA Today. Parton didn’t just bring those jobs - she brought a whole lot of tourists, too. But that’s no pejorative - at Dollywood, everybody’s a friend.

Even though the property changed hands and identities multiple times before Dolly ever entered the equation, the park has the lived-in majesty of a family heirloom. Expansions and heirlooms wind organically wherever the mountains allow. The mock Tennessee villages, complete with working grist mill, are authentic enough to pass as historical centerpieces. Chasing Rainbows, a museum dedicated entirely to the park’s namesake, manages to tell a genuine story that could’ve easily tripped into Hallmark hagiography. Whether or not fingerprints belong directly to Dolly, you can always see the craftsmanship here.

That goes for the one-of-a-kind attractions, too. The only launched woodie ever constructed. One of the last built and last surviving custom Arrow Dynamics loopers. An indoor hybrid dark ride that winds through a burning village and ends with an explosive splashdown.

And maybe that’s the secret recipe.

Despite anchoring two of the biggest tourist traps east of the Mississippi, there’s nothing artificial about Dollywood. Despite being a massive, modern amusement park, it still feels like home.

There’s something mythical about Knoebels.

It’s the biggest free-admission amusement park in the country, yet it’s hard to find on the map. It has two of the oldest continuously operating dark rides in the world, yet it doesn’t come up much in amusement park history. It feels as much like a state landmark as a county fairground.

Consider Fascination, a electronic mix of skeeball and bingo played in a dedicated hall for department store prizes like blenders and wall clocks. Consider Cosmotron, a standard Himalaya spinner built inside a pole barn and livened up with a disco lighting package that occasionally syncs to the Fresh Prince of Bel-Air theme. Consider Black Diamond, a vintage hybrid of roller coaster and dark ride that runs almost five minutes and works in every gag from red-eyed bats to talking dinosaur fossils.

Even the most ordinary entertainment at Knoebels comes with that kind of character. There is nothing exactly off-the-shelf here. One of their latest additions, the Flying Turns, may not seem so unusual if not for the fact that it single-handedly resurrected an extinct species of roller coaster. Walking around is its own attraction, an easy-going time machine, and free to anybody who makes the drive.

The ticket-per-ride system makes Knoebels accessible in a way almost every other amusement park isn’t. The ambiance is complimentary. There’s no pressure to see or do anything, let alone everything. Many folks visit just for the grub, good enough to earn the park 17 of the last 20 Golden Ticket Awards for Best Food.

For all the internet guides and insider tricks for how best to spend your day at Disney, Six Flags, or some other coaster capital, there truly is no wrong way to enjoy Knoebels.

Just make sure you try for the brass ring on the Grand Carousel. It’s more than worth the $1.75.

The Tampa park has the advantage of spitting distance with Orlando.

Busch Gardens Williamsburg, on the other hand, has the advantage of discretion. It hides in the hills of a state not known for its themed entertainment or permanent summer. Between the quiet and cold, it only draws about half the guests of its Floridian sister. But the result is a park that feels like it’s always been there, at least longer than the 1975 opening day.

In the middle of the Virginia wilderness, Busch built Europe. England, Scotland, Ireland, Italy, Germany, France. Even some honorary territories made the cut, like French Canada and Sesame Street. They’re carved out of primordial forest and scattered around a Coke bottle-green ravine. Though this doesn’t quite suit all of the “hamlets”- ancient Rome has never looked so deciduous - it’s hard to complain when the surroundings are this breathtaking.

But there are other ways to lose your breath at Busch Gardens Williamsburg.

It boasts one of the most well-rounded coaster collections of any regional park.  You want butter-smooth airtime? Apollo’s Chariot. You want to fall straight out of the lower atmosphere? Griffon. You want some out-and-back action on the high pine? InvadR. You want a training ground for aspiring enthusiasts with some dark ride spills thrown in? Verbolten. And on and on it goes, each ride complementing the rest and filling in the gaps.

That symbiosis extends beyond the tallest and fastest, too.

Busch Gardens Williamsburg has something for all tastes and tolerances. Take the skyway to Germany for a full Oktoberfest feast. Feed some sheep and pose with Clydesdales on a Scottish farm. Enjoy a bumpy, scenic tour of Irish myth from the safety of a VR headset. Turn the kids loose in the lavishly themed Land of Dragons.

It may sound like a bad commercial, but there truly is something for everyone at Busch Gardens Williamsburg, possibly the most elaborate American amusement park north of Florida and east of L.A. It is, at least, the prettiest.