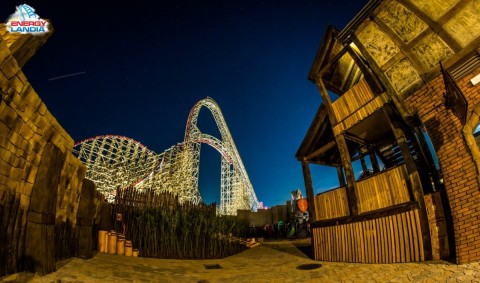 Bucket list parks have taken us to Japan and Germany, to trailblazing parks that, unique and sprawling, paved a way for themselves in the industry. This month's bucket list park is new to the scene, may just leave you surprised.

This European park is not the largest on the continent. It does not boast the most coasters, nor the most diverse lineup. This park is new, just shy of seven years on the scene in an already cramped and confused theme park industry. So why is it a bucket list park?

Energylandia opened in Southern Poland in 2014. That year, 2014, might sound insignificant, but it actually paints Energylandia as one of the newest major theme parks in the world. Household parks—your Disneys, your Cedar Points, your Six Flags Magic Mountains—have been around for years. In the case of Cedar Point, 150 years. These parks have reputations and ride lineups that absolutely out-shadow Energylandia’s, but they have—in some cases—10 times the amount of life behind them. Energylandia is a rookie, sure. But that fact makes its impact on the industry even more impressive.

Energylandia is broken up into five main sections: Fairytale Land, Family Zone, Extreme Zone, Water Park, and Dragon Town, described as a conglomeration of pop culture icons like Lord of the Rings and The Witcher. With a solid mix of theme-based and thrill-based areas and attractions, this will leave all guests, children to the world’s most ambitious thrill seekers, wanting for nothing at the end of their day. It is created with, per the park’s website, “all age groups in mind: children, teens, and adults,” and has already cemented its place as the largest theme park in Poland.

As a coaster enthusiast who’s not exactly quiet about it, when I look at bucket list parks, I first think of bucket list coasters. Energylandia, which is again—relatively speaking—a shiny new park, is the home to two of my top twenty to-be-ridden coasters: Hyperion and Zadra.

Hyperion is an Intamin hypercoaster standing at a daunting 250 feet. Hyperion is one of those sweet, rare coasters with a first drop that exceeds its height, at 269 feet. Coasters such as these take advantage of their terrain (hills, valleys, and quarry walls, in the case of Six Flags Over Texas’s Iron Rattler) to gain momentum and speed with a limited height. Hyperion is an airtime-packed ride experience that hauls through its nearly 5,000-foot layout at a top speed of 88 miles per hour. Hyperion’s dive drop as it makes its way to the second half of its out-and-back layout is not a one-of-a-kind element, but it is certainly rare, sending riders through an apparent airtime hill before flipping them upside-down for the remainder of the plummet to earth.

The closest U.S. comp to this coaster is Hersheypark’s Skyrush, with trains that suspend outer riders off either end of the track. (However, while Skyrush’s trains are floorless, Hyperion’s trains do have a shelfed floor.) Any coaster enthusiast knows that restraints can make or break a ride experience, especially one packed with as much airtime as Hyperion. The good news is that Hyperion features a relatively open lapbar restraint system that leaves riders open and free as they surpass hill after hill.

Hyperion has quickly declared itself a ride to be talked about, dreamt about, and drooled over since its 2018 debut. This ride alone cemented Energylandia as a park to get to, but then 2019 happened. Then Zadra happened.