WHAT IF... Rock 'n' Roller Coaster Became a Twilight Zone Ride? Here's Our Idea... What's Yours? 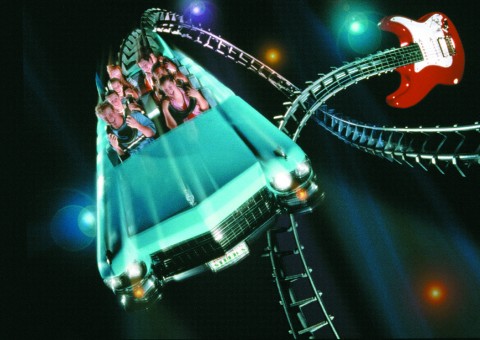 Every day at Walt Disney Imagineering, designers ask themselves and each other the same question: "What if?" In the so-called "Blue Sky" phase of design, there's no limit; no capacity; no technology; no budget. The idea is to dream big and let reality hem in the project's scope later. In this new Theme Park Tourist mini-series, we invite you to "Blue Sky" with us, and to reimagine a ride that could use a refresh. This month, it's all about Rock 'n' Roller Coaster, an unusually-aged leftover of another era at Disney's Hollywood Studios. Check out our solution for this could-be classic, then submit your own!

Ah, the early '90s! At Disney Parks, it was a time when practically anything seemed possible. Bolstered by an era of ultra-ambitious (and ultra-expensive) attractions born of Michael Eisner's "Ride the Movies" rebirth (think STAR TOURS, Alien Encounter, Fantasmic, and Indiana Jones Adventure), Disney Parks had well and truly become cool, edgy, cutting-edge, finger-on-the-pulse-of-pop-culture places filled with thrills that would leave even teenagers rallying for a trip to Orlando.

Though the "Ride the Movies" era produced a dozen cinematic E-Tickets, there was none to top The Twilight Zone Tower of Terror at the then-Disney-MGM Studios. Set down at the far end of a custom-built Sunset Blvd. land, the haunting husk of the Hollywood Tower Hotel, was an icon of Imagineering (and arguably, the best ride of the '90s). In stepping down Sunset Blvd., all eyes would be drawn to its scarred facade – its crumbling foundation and its crackling neon – as eerily distant Jazz standards wafted through the air, supernaturally locked to its 1939 abandonment...

Okay, okay, Rock 'n' Roller Coaster Starring Aerosmith was decidedly a kick-off to the early 2000s era of Imagineering (with most of the ambition of the '90s, but less of the star-power... see also, Mission: SPACE, Soarin', California Screamin'). But this indoor launched coaster has always been an odd man out. From its queue through a radio station where Aerosmith is practicing to its stretch-limo vehicles and its post-modernist twisting through oversized blacklight cut-outs on a quasi-literal race through modern Los Angeles, it doesn't really vibe with what Hollywood Studios is today, and it certainly doesn't fit with Sunset Blvd.

One more thing you've got to know before we begin Imagineering: Rock 'n' Roller Coaster is an off-the-shelf model built by Disney's go-to coaster manufacturer Vekoma... but it's a strikingly similar ride to the LSM launch coaster developed by another manufacturer, Premier Rides. Premier officially launched their LSM coasters three years earlier with cloned installations at (then-Paramount's) Kings Island and Kings Dominion.

Both were themed to CBS's The Outer Limits, a Twilight Zone-esque sci-fi anthology series. The Outer Limits: Flight of Fear was clearly the blueprint for Rock 'n' Roller Coaster, albeit with guests cast as "Press" attending a secret government agency's reveal of a captured UFO when "something goes horribly wrong," stretching guests psyches to "The Outer Limits."

Here's our proposal for how to reimagine Rock 'n' Roller Coaster. Imagine that now, as you draw nearer and nearer to the Hollywood Tower Hotel, your attention is pulled to a new feature: an archway entrance to Sunset Radio Studio, home of "Tunes That'll Blow Your Wig." The "Golden Age" of Hollywood continues into the inner plaza once dominated by an inverted stretch limo, but now reigned over by a flashing radio tower and SNST marquee.

And as you step closer to the building, you just may hear the live broadcast of the "Silver Lake Sisters" broadcast live from the Hollywood Tower Hotel's Tip Top Club, interrupted by occasional crackling news transmissions – "gas explosions on Mars..."

As we step under the lattice tower, through a cloud of crackling audio, and into the studio, we find ourselves on Halloween night, 1938... Yes, we've been transported to the actual night that Orson Welles' fabled radio drama reading of War of the Worlds allegedly inspired nationwide panic, with people believing that this sci-fi adaptation of a Martian invasion was actually the "breaking news" it claimed to be.

Throughout the queue, we see evidence of plans for the 1938 broadcast; plans, schematics, and time-stamped scripts suggesting the staged invasion; even various sketches of what the Mars invaders may look like.

After a lingering moment, in a startling burst of static, the room flashes to darkness. Projection mapping overtakes the room with television static. In a flash, the studio's gone... all but a single radio left on a table. The tinny radio kicks on with the introduction of a radio broadcast of The Twilight Zone. As it concludes, only we and the radio exist, floating in an infinite field of stars... until Rod Serling steps into the scene, approaching the radio.

"As must be obvious," He gestures at the radio. "in its day, circa 1938, its type was one of the most elegant consoles on the market. Now with its fabric-covered speakers, its peculiar yellow dials, its serrated knobs, it looks quaint and a little strange. Yet for tonight's episode, you will find out how strange a world this device can create. Fact and fiction are one and the same when you have your dial turned to... the Twilight Zone."

With that, the radio station flashes back into being as Welles asks, "Think anyone'll buy it?" Guests are dispatched to the back alley as the radio-produced sounds of landing crafts and distant explosions seem surprisingly convincing... And as riders are launched into the inky blackness of the unknown, sweeping orchestration aligns with actual clips from the 1938 broadcast. The train swirls through endless stars, diving and twisting through infinity...

But halfway through its course, just as riders gain a sense of direction, those stars fade away, revealing that the coaster has been set not in outer space, but inside the radio we saw on the table. We have richocheted between its wires, curved along the inside of its speakers, and corkscrewed over amplifiers that stand massive all around us. Returning at last to the radio station, Serling's words echo: "Around and around she goes, and where she stops, nobody knows. What happened here is yours to be believed or disbelieved. One way or another, if you're seeking something strange, you can find it through a strange and wonderful machine called a radio... tuned to the Twilight Zone."

That's just one idea for how Rock 'n' Roller Coaster could take on new life and a new identity. Now we want to hear yours. Whether it's a sentence, a drawing, a story, or a schematic, tell us how you would update Rock 'n' Roller Coaster! Share your thoughts in the comments below or on Facebook. If you like the idea of a "What If?" series, let us know, and we'll continue to collect these Blue Sky daydreams.

I like your article, and I would like to see more, but DHS already has one Twilight zone themed ride. How about a Cars themed coaster to go with the Cars animatronic show, and creating a Cars sub land themed to a racetrack?