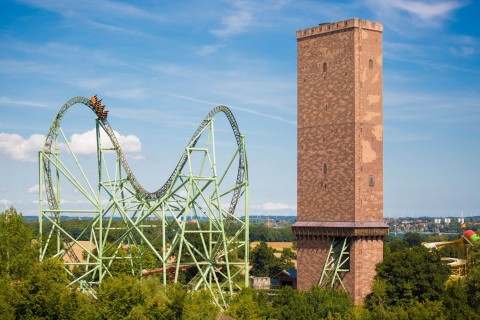 King Erik of the Danish empire reigned at the turn of the 14th Century. Accompanied by stories of cruelty and harshness, Erik’s own people rose up against him. So, in an attempt to maintain his rule, the villainous king built a fortress that would not be conquered and called it Kärnan. Legend has it that, in an attempt to secure his castle, King Erik spoke a spell so powerful, so all-consuming, that pieces of his soul are left in the the walls of Kärnan today.

Impenetrable. Fabled. Mysterious. Hansa Park’s Der Schwur Des Kärnan is as furious as the castle from which it receives its name. For February’s WTF Coaster of the Month, we’ll be traveling to Northern German, into the castle Kärnan, where a Gerstlauer roars.

The Oath of Kärnan

To start with the stats, Der Schwur Des Kärnan (translates to “the Oath of Kärnan”) is a 240-foot hyper-coaster manufactured by Gerstlauer, the same manufacturer behind Knott’s Berry Farm’s Hangtime and Alton Towers’s beloved record holder The Smiler. Gerstlauer is known for its wacky and unconventional creations, and Kärnan is far from an exception. Kärnan reaches a top speed of 78 miles per hour (about 125 km/h) through its 4,000 feet (about 1,220 m) of track. Though this ride offers a vertical drop and a single inversion, you wouldn’t know just by looking at it; this attraction holds a thrilling mystery in its two enclosed sections which bookend the ride.

The ride experience starts in a pre-show where riders are told the legend of Kärnan, accompanied by practical and special effects which show the king’s dark magic spreading throughout the castle and possessing its occupants. After, riders are assigned seats…not by a Hansa Park crew member, but at complete random. This pre-show and randomized seating system builds and builds anticipation, and then you get to the lift hill.

Kärnan features a vertical lift (the likes of which found on Hollywood Rip Ride Rockit) which, paired with an open lap bar restraint system, is exciting in and of itself, but then the lift, quick-moving and shrouded in complete darkness, stops.

Riders sit. They wait. Then they plummet backwards.

For the unsuspecting rider this is a moment of panic, a scenario plucked from a nightmare. But for Kärnan, it’s just the beginning.

The ride continues up the lift hill, the second time successfully, and crests over the 90 degree drop. Soaring toward the ground and into the light of day, this is a disorienting and thrilling moment. The car catapults back up into a wholly original twisting element that resembles a non-inverting cobra roll (typically found on Bolliger and Mabillard loopers). While the first half of this ride is spent high in the air, traversing drawn-out and massive elements, the second half packs a punch that I prefer. With close to the ground S-bends and airtime hills, this second half is where you really feel that speed.

The ride eventually hits the brake run and all seems to be well. Riders may not even notice that, in a ride that advertises one inversion, the train has yet to invert. Then, pushing back into the darkness and toward the would-be station, riders complete one achingly slow heartline roll.

This coaster—spiraling and hauling and cursed and beautiful—is a beast of an attraction, one of Gerstlauer’s wildest yet (and for Gerstlauer, that’s saying something).