Spell's End: A Fond Farewell to Disney World's Sorcerers of the Magic Kingdom 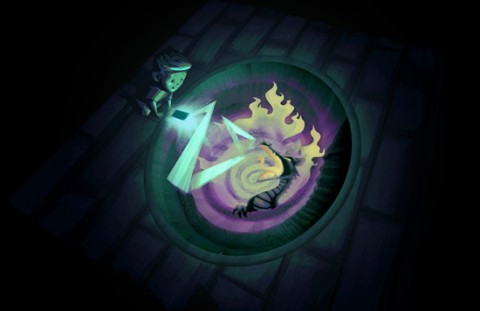 The spell's been broken on another Magic Kingdom favorite – an attraction many Disney World visitors never knew existed at all! Sorcerers of the Magic Kingdom invited guests to join a war waged in the shadows of the highest-attended theme park on Earth, fusing animation, collectible cards, and RFID technology into a cross-Kingdom scavenger hunt to defeat Hades and vanquish his cast of Disney Villains. Did you take on the quest?

The battle began February 22, 2012, when guests were invited to join a secret mission "recruitment" hosted at the Main Street Firehouse. There, they'd be equipped with a (free!) pack of spell cards (featuring Disney or Pixar characters), a Sorcerer's Key card, and a mystical map of Magic Kingdom's lands before being dispatched into the park to unlock hidden portals and battle villains.

Seeking brass plaques embedded in the ground (a la The Wizarding World's wand icons), guests would tap their Sorcerer's Key to a lock and ready for battle. A hidden portal (often a display monitor in a shop window with various degrees of disguise) would spring to life, with a short animated scene leading to a boss encounter.

Don't tell the kids, but on the "Easy" game play level, any spell card would defeat a villain in one go, only changing the animation of the attack itself.

After completing the full quest (about five hours of work), returning to the Main Street Firehouse would earn you another pack of cards and the chance to restart on "Medium" and "Hard" levels. Only then would guests be required engage in serious planning to discover and exploit each villain's weaknesses as they related to spell types (Charming, Energy, Flying, Gross, Quick, Strong, and Wishful) and of course, purchasing additional, limited edition, and powerful spell cards couldn't hurt... Cha-ching!

In its early days in 2012, the excitement of Sorcerers often caused mini-queues at "portals," hurting the attraction's "secret mission" style appeal and the "gee whiz" excitement of seeing a portal's story play out "just for you." Naturally, over time, the mini-game's appeal decreased, turning it into a "hidden gem" in Magic Kingdom's lineup... even if its hokey animations and not-so-well-hidden TV monitors didn't exactly age gracefully.

Still, the strange sidequest became a bit of a cult classic, with fervent followers collecting limited edition spellcards released at holidays. It's even known that some guests purchased tickets to Mickey's Not-So-Scary Halloween Party and its Christmas equivalent just for the chance to buy event-exclusive cards!

Believe it or not, the origin of Sorcerers ties closely into our recent deep dive into Disney's "MyMagic+" initiative – itself a somewhat shadowy undertaking meant to modernize Disney World's technology infrastructure. As we explored, MyMagic+ bet big on radio frequency identification (wireless and practically-powerless communication technology that was grafted onto every park turnstile, queue entrance, cash register, and hotel room activated via the iconic MagicBand accessory), meant to make guests' visits to increasingly-packed parks more seamless.

At just the same time, Disney's push for interactive queues saw playgrounds, hands-on experiences, and literal video games installed into ride lines, all meant to ease the frustrations caused by FastPass and give guests something to do while waiting for return times... or waiting in stagnant stand-by lines.

Sorcerers of the Magic Kingdom would do it all! The game could keep guests busy while they awaited FastPass return times; it could theoretically handle a not-insignificant number of guests per hour and spread them into mini-queues around the park; and it could utilize RFID technology in a new and exciting way! It was a living embodiment of MyMagic+, interactive waiting, and new era of technology at Walt Disney World!

To that end, the closure of Sorcerers of the Magic Kingdom is for much the same reason MagicBands are on the way out... As we explored in our in-depth MyMagic+ feature: smartphones. Put simply, smartphones made the interactive game (and frankly, much of Disney's RFID infrastructure that's less than a decade old) obsolete at worst, and old-fashioned at best. Today, Disney would much rather have you download the Play Disney Parks app to get your in-park entertainment.

So while it might not stand among Magic Kingdom's beloved Lost Legends: 20,000 Leagues, Mr. Toad's Wild Ride, Snow White's Scary Adventures, or The Timekeeper, this attraction – hidden in plain sight – became a fan favorite over its 9-year run and will be missed by many... including some who never even knew it existed.

There are two petitions to get the game back up, sign if you want the game to stay!

Played it on a couple of visits and enjoyed it, but there was a nagging feeling that it wasn't the best use of my limited and expensive touring time. AP holders didn't have to think about that, of course.

I think you hit the nail on the head, Mike. It would probably make much more sense at a park that caters more heavily toward locals, but if a once-in-a-lifetime tourist walked into the Fire House to see what it was, they'd pretty quickly find themselves thinking, "yeah, I don't really want to do this all day..." ahhaha.

I have always made it a point to turn off my phone when at Disney parks. I hate this idea of having to use it for virtual lines and other stuff. I'm going to Disney to get away from life.
Regarding the sorcerer's card game, my daughter and I spent several hours one night on our last vacation there playing it. It was super fun. Going to be missed for sure.