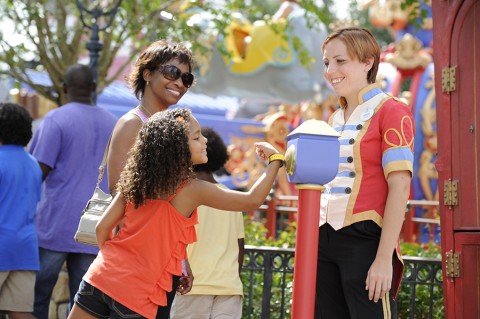 Standing in the sunset glow of Batuu… alone; gazing up at fireworks from a Main Street that’s… empty; a family perfectly sized to capture that Splash Mountain photo… with no pesky strangers in the log. Anyone who’s made the mistake of mentioning “Disney World” in earshot of a smart speaker or so much as Googled the possibility will quickly find their browser filled with these rosy images of a Disney Parks vacation. In the alternate reality Walt Disney World depicted there, there’s an unspoken guarantee: your family will find a Disney trip as frictionless as all those ABC sitcom families in the ‘90s did.

Of course, anyone who’s actually been to Central Florida will tell you that those dreamy plans quickly evaporate upon arriving on Walt Disney World soil. There, reality checks you fast. Pathways surging with people; restaurant reservations sold out six months in advance; multi-hour queues in parks notoriously short on rides; infrastructure from the ‘70s, ‘80s, ‘90s, and 2000s all intermingling with an army of transportation options, two dozen hotels, water parks; shopping districts; conventioneers…

You can imagine why, in the 2010s, it stood to reason that “The Most Magical Place on Earth” was losing a bit of its sleight of hand. That’s what MyMagic+ was going to solve. A billion dollar undertaking, Disney World’s all-at-once modernization was meant to add ease and simplicity back into a visit; to make Disney World as frictionless as promised; to leave guests effortlessly traversing (and spending money) across Disney’s campus. Did it work? Well…

From our lofty position in 2021 and an increasingly cemented look at what the near, post-pandemic future might hold for Disney World, it stands to reason that much of the technology Disney launched less than a decade ago is already at the end of its life cycle. What will the future hold? Let’s imagine by beginning in the past...

The rise of waiting

The story of Disney’s billion dollar MyMagic+ initiative has a must-mention prologue two decades before its implementation: the 1990s. Thanks to the arrival of fresh new leadership in the mid-’80s, Disney made a serious pivot from the decades of stagnation that had followed Walt’s death. At the studios, the Disney Renaissance (beginning with 1989’s The Little Mermaid) turned the Mouse House into a pop culture juggernaut, churning out the definitive stories of a generation for a full decade without one bust in the bunch.

Disney’s theme parks, then, found a different kind of reawakening. Under that new leadership, Disneyland and Disney World returned to an M.O. Walt himself had championed – containing the stories and characters that mattered to modern audiences – but did so with an added twist. Michael Eisner’s “Ride the Movies” era invited not just movie-themed thrill rides, but movies outside of Disney’s catalogue. As our dedicated in-depth histories of each show, Captain EO, STAR TOURS, Indiana Jones Adventure, Alien Encounter, and The Twilight Zone Tower of Terror were massive, groundbreaking, astounding, and, of course, really, really popular.

So is it any surprise that the ‘90s were also the era where waiting became a hallmark of a Walt Disney World vacation? The cinematic E-Tickets Disney launched in the 1990s were built for an onslaught of tourism, often containing lengthy but detailed queue space meant to soak up crowds (and keep them entertained while they waited). Both demand for and capacity supply within Disney Parks grew in the era, but the latter came much more slowly.

The “solution”? In 1999, Disney launched FastPass – a highly integrated and technological virtual queueing system. As a matter of fact, we dove into the complete story of FastPass (including its origin, its inner workings, and why mathematically Disney Parks would be better without it) in our Declassified Disasters: FastPass feature – a good prologue to today’s tale.

The New Millennium was, in many ways, a crescendo for theme parks in the era (given that the September 11 attacks in 2001 would swiftly cool tourism soon after). Within a year of 2000, two theme parks would make the leap into multi-park resorts: Universal Studios Florida (joined by 1999’s Islands of Adventure to become Universal Orlando Resort) and Disneyland (adding 2001’s Declassified Disaster: Disney’s California Adventure to become the Disneyland Resort). That’s important, because both made their evolutions all at once.

To that end, Universal Orlando and Disneyland Resort probably have more in common than most of us tend to admit. Both are urban resorts that are extraordinarily compact, hemmed in by bordering roads and highways. Both deposit arriving guests into massive, purpose-built parking garages; both funnel them into modern, master-planned shopping districts; both have guests ultimately stand between two theme parks and head toward whichever icon draws them first. Both are also miniscule enough to be served by intra-resort transit (be it monorails or water taxis) that connect to hotels that also came online during their transitions, as well as garden walking paths, man-made waterways, and other “intentional,” planned features.

That’s markedly different from Walt Disney World, isn’t it? For better or worse, Disney World is cobbled together from many different design eras, architectural visions, strategic plans, and literal decades. Take Disney World's shopping district, which "sprung up" in the 1970s as a mid-century shopping village, got the cinematic Pleasure Island in the '80s, added the neon West Side filled with '90s mainstays, then was partially masked beneath the classy "Disney Springs" banner in the 2010s, perfectly encapsulating society's modern outdoor fashion mall tastes. At every twist and turn, one-off additions, changes, exclusions, and strategic plans have shaped and reshaped it, grafting new onto old.

For that matter, take 192 to World Drive and you’ll pass interchanges, hotels, and attractions whose development spans fifty years and nearly as many ideas for what Disney World should be. From ESPN Wide World of Sports on the right and All-Star Movies Resort on the left; under a distinctly-90s welcome sign now cooled from its purple grandeur with 2020s royal blue; past the spires of Galaxy’s Edge and the boxy beige showbuilding of Rock ‘n’ Roller Coaster; Michael Graves’ staggering Swan and Dolphin to the contemporary Swan Reserve; offramps to the ‘80s grandeur of EPCOT and finally to the ‘70s blacktop parking lot of Magic Kingdom. Talk about a time warp.

A lot of Disney World’s piecemeal evolution became apparent after the all-at-once modern makeovers of Universal Orlando and Disneyland Resort. Today, it’s easy to imagine that first-time guests may wonder aloud why Disney chose to build its theme parks so far from one another in Florida… It makes us wonder, too: Given the benefit of hindsight, would Disney World leaders wish they’d established space for multiple parks around the Seven Seas Lagoon? Might they have created a resort interior free of cars and open to pedestrians like Disneyland? One with a more intentional “hotel district” like Tokyo Disney? A single core from which all theme parks, water parks, and hotels can be accessed like Universal Orlando?

Look, Disney World began as the “Vacation Kingdom of the World.” Fifty years later, it still retains the title. It does not feel harmonious, pedestrian-friendly, or master-planned… because, of course, it wasn’t. In the five decades since its opening, its sprawling (and sometimes random) growth and evolution has seen it pass through many leadership lenses. It has been reimagined; grown; shrunk. It has been brave. It has been meek. There are parts of Disney World that will always betray their origin in the ‘70s; ‘80s; ‘90s; 2000s. It’s not a harmonious whole. And that’s okay! Disney World’s grandeur, growth, and history is part of its identity.

But in the 2000s, leadership started to get serious about modernizing its facility’s technological backbone; its unseen infrastructure. And that’s when FastPass was determined to not be enough…

By 2005, the “Happiest Homecoming on Earth” promotion invited guests from around the world to return to Disney Resorts in the midst of their own turnaround. Despite the Homecoming technically celebrating Disneyland’s 50th Anniversary, it was Disney World who got the gifts – one from each resort (“Cinderellabration” from Tokyo, the Lost Legend: Soarin’ from Anaheim; “Lights, Motors, Action” from Paris, and the Modern Marvel: Expedition Everest as a gift to itself). The message: sure we went through our own late-’90s dark period, compounded by a tourism decline after 2001, but Disney World is ready for you again.

Arriving guests in the mid-2000s, though, surely recognized that Disney World was increasingly a place of friction. Disney’s internal polling discovered that some families split up entirely and criss-crossed the park more than 20 times in an attempt to reduce wait times. Queues from the ‘70s and ‘80s were overrun with guests seeking “stand-by” refuge while awaiting FastPass return times; park paths designed for audiences of those decades were suddenly brimming with 21st century crowds; infrastructure like restrooms and restaurants raced to expand for growing crowds. And frankly, the era of expensive E-Tickets to absorb them was well-and-truly over thanks to the languishing last years of Michael Eisner’s stay as CEO.

According to FastCompany’s Austin Car, Disney’s evaluation found that “certain key metrics, including guests’ ‘intent to return,’ were dropping; around half of first-time attendees signaled they likely would not come back because of long lines, high ticket costs, and other park pain points.” Disney Board Member Steve Jobs reportedly explained to assembled executives, “doing what you’ve been doing and believing that will remain the model for the next 20 years is not right.”