How an Idea Becomes a Ride: Flat Rides 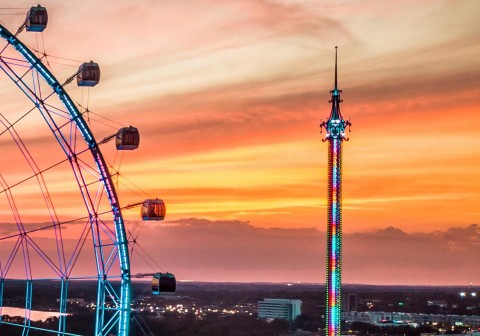 In our first feature of our How an Idea Becomes a Ride trilogy, we explored roller coasters and the blood, sweat, tears, and decisions that go into their inception. Later we talked about dark rides, the immersive, well-themed, AC-blasting story-driven side to amusement attractions. But there is one type of ride so integral, so thrilling, so ingrained in the history and future of amusement parks, yet so often pushed aside.

Between roller coasters and dark rides, between churro stands and souvenir shops, the flat ride finds its turf. The flat ride--the drop tower, the Enterprise, the ferris wheel, the Screamin’ Swing--fills in the empty space found on the midway. Flat rides are cheap thrills with small footprints. They typically don’t draw much more than a twenty minute line and aren’t the household rides for your Cedar Points or Disney World. But to imagine a theme park without flat rides would be to imagine a sundae without a cherry, a Christmas dinner without fresh-baked bread. They may not be the first thing you think of, but the absence of their presence would undoubtedly be felt in any variation of the theme park, amusement park, fair, or carnival.

To put a black-and-white definition on it, a flat ride is a type of amusement ride that uses power (unlike most roller coasters, which operate on gravity and momentum) to spin, shake, and drop riders. Most carnival attractions, like the Tilt-A-Whirl or the aforementioned drop tower, are flat rides, but they can also be played up into more themed attractions (think the renowned Teacups that are almost synonymous with a trip to Disney Word). If a ride doesn’t work on a track, isn’t a water ride, and isn’t a dark ride, it almost certainly falls into the category of “Flat Ride.”

Why a Flat Ride?

If flat rides aren’t the most popular and renowned attractions, then why even have them?

One: they’re cheap. Relatively. While a roller coaster costs millions--count them--millions of dollars, even for basic and cheaper models (like a Batman clone, which, though cranked out by B&M for almost every Six Flags park, costs a pretty penny of $7 million), flat rides ask far less of their investors, more in the six-figure range, or less. Of course rules are made by exceptions, like Busch Gardens Tampa’s renowned Falcon’s Fury, which cost the park more than $5 million prior to its 2014 debut, or a used carnival ride, which--while maybe not the most reliable attractions--can be copped for less than fifty grand. But for the most part, flat rides are cheaper options for when parks are looking to expand but aren’t in the market for a larger investment.

Two: size. As mentioned in How an Idea Becomes a Ride: Roller Coasters, parks have a limited amount of space to work with when looking to make upgrades and additions. Take Cedar Point, for example, which operates on a literal island. Sometimes roller coasters and dark rides with smaller footprints can be sought, but the best option for parks with limited space is the flat ride. If your hometown park is packed to the brim but teasing an expansion to come, you can expect a flat ride in the near future.

So why flat rides? These cheaper and smaller investments pack a punch for thrill-seeking guests while keeping attendance dispersed throughout the park, rather than localized around more popular attractions.