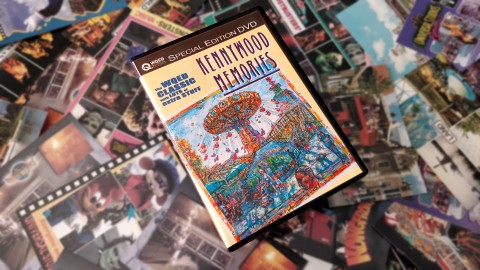 Kennywood is one of only two amusement parks in the United States registered as a National Historic Landmark, and it’s got 29 years on the other.

If you’ve never made the pilgrimage, there’s truly no place like it. Just finding it feels quaint - little yellow arrows hang around Pittsburgh on phone poles and red-brick storefronts, all pointing the way, all promising, “KENNYWOOD.”

No matter which way you drive in, you won’t see it until you’re right on top of it. The park hides on a cliff over the Monongahela. If not for the stratospheric heights of Phantom’s Revenge or the smoking mills across the river, it might pass for a natural wonder from the road. On the other side of its entrance tunnel under Kennywood Boulevard, it still does.

Somehow, Kennywood is still a local secret. Grocery stores as far as Cleveland offer tickets at half the price of any other regional park. On its busiest days, it’s not that busy. On its quietest, it’s divine. The grounds are a living museum, the rides interactive exhibits - as of this year, one coaster has been in constant operation for over 100 years.

No amount of flowery prose can do justice to what makes Kennywood one-of-a-kind, so thank goodness for Kennywood Memories.

Produced by Pittsburgh’s PBS station, WQED, in 1988, the special makes for an unusually intimate slice-of-summer. In just under an hour, Kennywood Memories covers 22 days of fun, family reunions, and world-class French fries. To date, there’s no better documentary on the subject.

As soon as the carnival organ starts up, it feels like home. Warm voice-over memories brighten up black-and-white footage from the park’s early days. Color blushes in almost by accident - besides the fashion, the 1940s don’t look much different than the 1980s at Kennywood. The smiles certainly haven’t changed. ”The best thing you take with you when your parents force you to leave at the end of the night,” says writer and narrator Rick Sebak, “are memories.”

But memories belong to more than guests.

The special opens before the park, with wandering maintenance men doing their rounds. A carousel tiger looks especially majestic in the incandescent dawn. Fred Webber, a Kennywood veteran since high school, explains the arcane art of keeping up attractions that have outlived all replacement parts. The trick is a lot of welding and a little luck. Mechanics Bryan Bartley and Geno Chamboredon walk the legendary Thunderbolt each morning, nipping, tucking, and occasionally falling on the dew-slick timbers. The oiling process is especially novel - Geno wedges against the front car’s handlebar and rides standing, leaning over the track to apply grease as needed at 55 miles-per-hour.

A stark difference between Kennywood Memories and every other home video vacation is that it’s not a commercial. Deaths at the park are detailed as a tragic counterpoint to modern safety measures. The painted skulls atop the Racer lifthill shout, “DO NOT STAND UP,” for a reason. Even racial segregation is mentioned, a unique blemish for an amusement park built three years after Plessy v. Ferguson and 65 before the end of Jim Crow. It’s not much, but when so much of themed entertainment is dedicated to preserving dreamy utopias where no blade of grass is ever out of place, it’s almost profound.

Kennywood is a real place, past and present, imperfect and improving.

The archival footage, some of it discovered on accident just for this special, paints a stark picture. Once upon a time, when trolleys were the pinnacle of public transportation, Kennywood was just another stop on the line. Companies spent their retreats on its sports fields, in its pools, and around its canoe-filled lakes. The advent of television brought ads straight out of a drive-in intermission. A jingle promises “a trip through the dark with surprises inside” as a cartoon skeleton dances a jig. They all end with a cheer: Let’s Go! Kennywood Park.

But it’s the living history that gives the documentary its distinct flavor.

Tony Sacramento, the aptly anointed Mr. Kennywood, demonstrates his silky-smooth method for hopping on and off the carousel. To the delight of passing riders on horseback, the man hasn’t lost a step. Naomi Jones, who started at the park in the summer of 1929, runs the Lost & Found with expert curation and an easy smile. She shows off her accidental collection of car keys and wonders how anyone got home without them. A small army of grandparents gather ‘round the camera on Kennywood’s famous Italian Day, treating the imaginary audience like family and telling stories about where they used to make out when the rides still took tickets.

The nostalgia is as infectious as the yinzer accents - try not to pick up “Kennywood is open” as slang for an unzipped fly - but now that interest has compounded. It’s been over 30 years since these kind folks looked back over 30 years. The present of Kennywood Memories is now its own nostalgic past.

The latest and greatest attraction at the time was the Laser Loop, soon to be replaced three years later by the legendary Steel Phantom. Coaster enthusiasts will appreciate just how many angles the documentarians manage to squeeze out of its launch. The games of skill haven’t changed much, but parts of the Penny Arcade did actually take pennies. Where the ‘80s arcade games are now, wrought-iron machines from the ‘30s played flip-card vignettes of brawling cowboys and bashful showgirls. Mitzi Marsh and Sharon Rusak, who take turns playing Kenny the Kangaroo, compare notes on recent fashion trends. The latest is spandex sportswear. The most egregious sign of the times are The Sweeperettes, an all-woman cleaning crew famous for patrolling the sidewalks with a broom and bucket.

One of the wildest differences between yesterday and today is Kennywood’s history of circus entertainment. The old film of a bear riding a motorcycle may seem cruel, but the contemporary acts are similarly sadistic, if a little more human. A Hollywood stuntman climbs into a coffin that promptly explodes. It’s not a disappearing act. His body flops out of the smoke, lively as a Raggedy Andy doll. Technicians drag him away as Andy Vettel, Jr. the voice of Kennywood, encourages onlookers to enjoy the rest of their night at “the one-and-only roller coaster capital of the world.”

Just as nobody still comes in their church clothes or calls the coasters “toboggans,” the documentary makes wise allowance for the passage of time. Kennywood, so goes the copy, is just as loved for its changes as its absolutes.

The woodie trifecta that gave the park its reputation - Racer, Jack Rabbit, and Thunderbolt - are still rolling freight. Thunderbolt, the youngest of the three by track expansion, is still riding a high here, after the New York Times called it the ultimate American roller coaster in 1974. As of 2019, it remains in Amusement Today’s top 20 wooden roller coasters around the world. The timber backbone of Kennywood remains intact, strong as ever, and as resolute as any Pennsylvania state memorial.

But the park was on the edge of its biggest decade without knowing it.

Comment written by Nicole, apologies it was accidentally deleted but I managed to copy the text:

Hi Jeremy! I loved your article! It seems you can really feel what all of us Pittsburgh natives feel, or used to feel, about Kennywood. Many of us are quite unhappy about it's changes that have come after the founding family sold the park to a commercial, multi-park, owner that's isn't based in PA, or America for that matter, and doesn't know the history of the park. As you might know, some of the rides there are also National Historic Landmarks inside the Historic Landmark itself. The Racer was one that was mentioned in your article. Finally to my point, Kennywood announced late last year that one such landmark, The Kangaroo, was being torn down and taken away forever. I was always told that tearing down a National Historical Landmark was illegal, and to top that, The Kangaroo was the last operating ride of its kind in the world. Sorry for the long post, I am just curious if you had heard this and what your take on it was. Thank you for your time!!