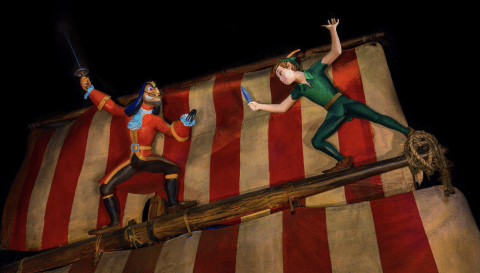 Where’s one place on Earth that you can swing through New York, soar around the world, sail through the Caribbean, sing under the sea, and slide through Antarctica without leaving town? Of course, it’s Orlando… by all accounts, the theme park capital of the world. Thanks to Walt Disney World and Universal Orlando, Central Florida is the place where dark rides bring incredible stories to life using incredible classic, and cutting-edge ride technologies. But not all dark rides are created equal...

Today, we took the chance to look over the enormous portfolios of dark rides you’ll find scattered throughout the Orlando area. In this feature, we’ll list our choices for the best and worst Central Florida dark rides of some common types (like trackless, flume, and motion-based). Do you agree with our best and worst of Orlando’s dark rides? Which fantastic (or flubbed) attractions did we leave out? Or should one of our runners-up be awarded the “Best” award for some of these ride systems? We can’t wait to read your thoughts in the comments below!

Despite their proliferation at regional amusement parks, “shoot-’em-up'' dark rides are relatively rare among Disney & Universal Parks. Still, there are enough in Central Florida that some rise to the top while others just don’t feel quite the quality. Of the lot, Men In Black: Alien Attack manages to hit that early-2000s sweet spot before screens became the name of the game. It’s got a clever set-up, an impressive scale, and a compelling competition! It’s a great example of how the industry’s lean toward ‘interactivity” doesn’t always have to mean plotless flat-panel scenes populated by glowing LED targets. Men in Black is large, dimensional, and dynamic. Especially compared to… 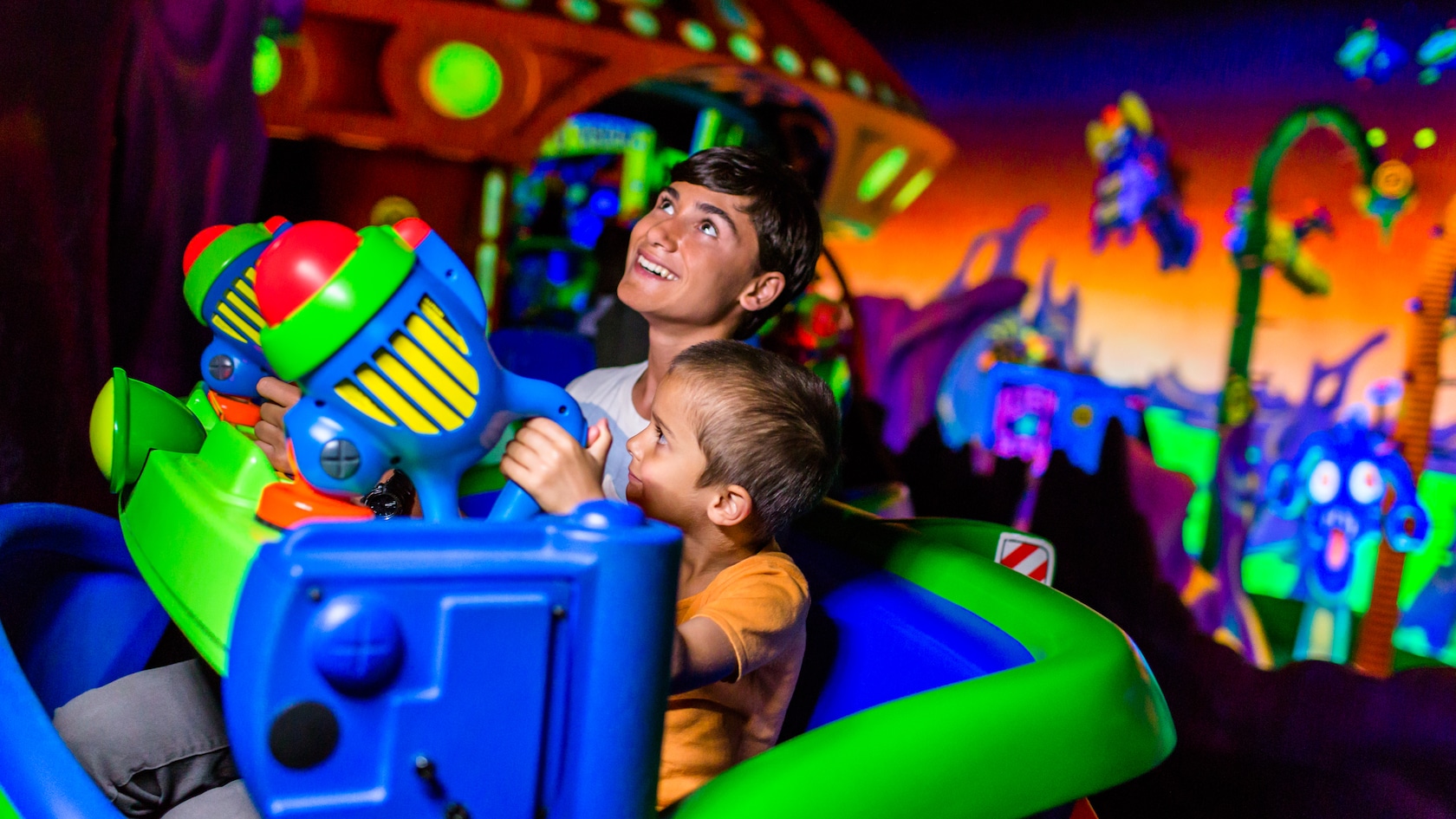 In terms of Disney & Universal Parks, Buzz Lightyear’s Space Ranger Spin practically invented the laser-blasting dark ride genre. The 1998 addition to Magic Kingdom’s Tomorrowland was the beginning of the end for the land’s short-lived 1994 “original mythology,” ushering in the Pixarification of Disney Parks. It’s not that Buzz is a bad ride at all; just that its blacklight, cardboard cut-out, “toyetic” style is about as dated as a “classic” can be… Almost every single “castle” park on Earth has a Buzz, but Shanghai’s version dropped the overt, day-glo “plastic sheen” in favor of something more dimensional. We’re hoping Pixar’s upcoming film Lightyear causes a similar reimagining in Orlando.

THE BEST: The Amazing Adventures of Spider-Man

Arguably, even two decades after its debut, there’s no modern dark ride on Earth that can match the Modern Marvel: The Amazing Adventures of Spider-Man. Debuting the iconic “SCOOP” ride system (which, it turns out, was dreamed up to compete with the Modern Marvel: Indiana Jones Adventure’s EMV), the ride is a masterclass in screen-based effects, physical effects, and the precision needed to mesh them together. Sure, the “Spider-Man” formula has been re-used on… well… basically every single Universal ride since… But this major player in the Age of the Simulator nonetheless holds up as a shockingly cool experience that defines Universal Orlando.

Sorry, folks, but this is most certainly one category where – at least in Orlando – Universal dominates. Disney famously did bring the motion-based EMV technology to Central Florida (and even carbon-copied Indy’s layout) but wrapped the experience as DINOSAUR. In our in-depth history of the Animal Kingdom ride, we weren’t sure whether to classify it as a Modern Marvel or a Declassified Disaster. After all, DINOSAUR is a ton of fun!

...But it’s also kind of a mess. Filled with uneven narration, oddly flat scenes, terrifying animatronics, abandoned effects, and lots and lots of pure darkness, the ride is just plain odd. Especially for industry fans who can’t help but compare it to Indiana Jones Adventure, DINOSAUR comes up short. But even for those who don’t, the ride doesn’t tend to be listed among favorites or classics. And given the cost (and the use of the otherwise-renowned EMV tech), that’s probably not the reaction Disney hoped for.

THE BEST: STAR WARS: Rise of the Resistance

In Orlando, it’s pretty hard to compete with STAR WARS: Rise of the Resistance by any 21st century measure (except, maybe, its uptime). The ride is often considered a “next-generation” attraction in that the line between “queue” and “ride” is blurred, and the whole experience technically seeps into the larger mythology of Batuu. Its core, though, is certainly a trackless dark ride (and one where an Animatronic is right on board!) that serves as guests’ escape through the labyrinth of halls that make up the First Order’s Star Destroyer. Home to some of the Best Audio-Animatronics on Earth and a number of captivating physical effects, the ride is sort of a “best-of,” borrowing all the coolest tricks from Imagineering’s playbook.

THE WORST: Antarctica: Empire of the Penguin

Yes, Disney recently seemed to spoil their unending line up of awesome trackless installations with a very odd attraction in Japan, and we don’t love Universal’s Reign of Kong, but there’s still only one “worst” here in terms of major parks. Fans were aghast when SeaWorld Orlando – not Disney or Universal – announced that they’d open the first major trackless, LPS-based dark ride in the United States. Despite glowing concept art of joyful riders sliding around a bright, icy paradise, though, Empire of the Penguin didn’t quite land. It’s uneven, short, and ends with a pretty embarrassing “simulator” experience. While it would probably be a fun family ride at their Texas or San Diego park, set against the backdrop of Orlando? Yikes…

Though the Omnimover ride system officially debuted on Disneyland’s Lost Legend: Adventure Thru Inner Space, there’s certainly no more iconic use of it than as the Haunted Mansion’s “Doom Buggies.” The Omnimover is, by design, almost ethereal; gliding effortlessly and continuously through scenes. It’s part of what gives Disney’s Haunted Mansion a different feel than other spook houses. Rather than triggering pop-up effects as your single car passes alone through a scene, you’re instead an observer, watching as eerie sights and sounds unfold around you. The Haunted Mansion is, of course, an icon of Disney Parks, and even when Omnimovers became the de-facto ride system of EPCOT’s lost classics, it still remained the best use of the system.

THE WORST: Under the Sea: Journey of the Little Mermaid

It’s hard to pick a “worst” in this category, because there’s nothing at all that most guests would find at fault in Under the Sea: Journey of the Little Mermaid. As a matter of fact, it’s a fantastic family attraction that’s beautifully integrated into the park’s New Fantasyland. What makes it the “worst” are certainly some of those heady, Armchair-Imagineering nit-picks with it, like that it’s a textbook “book report” ride; that it misuses the Omnimover, placing guests into the role of mere “observers” in a singalong rather than actually being in Ariel’s story; that it’s Audio-Animatronics are… well… kind of “Uncanny valley;” that it famously lacks a finale, merely skipping over the film’s epic, cinematic, and dark-ride ready scenes.

Is Journey of the Little Mermaid a bad ride? Absolutely not. But set alongside the (relatively few) remaining Omnimover-esque rides in Orlando, it’s certainly the least adored by many.