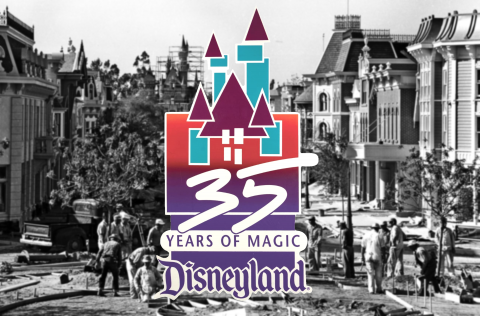 This year, Walt Disney World turns 50. Not that you’d notice, even if you do frequent sites like this one. Despite the best efforts of park security, ticket prices, and zoning laws, the world with a small w has breached the castle walls.

According to the annual earnings report, Disney park closures due to the ongoing pandemic cost the company $6.9 billion in 2020 alone. Disneyland and California Adventure remain shuttered, with the rest operating at varying degrees of low-capacity. Last April, the company furloughed 100,000 employees from its parks and hotels. In November, it was announced that 32,000 of them would be fired outright by March of this year. That news came just a few months after Disney executives bounced back from their 15% pay cuts and two weeks to the day that another earnings report celebrated a fourth-quarter $720,000,000 healthier than expectations.

If you check any of the usual forums, mourning is reserved for attractions now indefinitely delayed if not cancelled outright. The sudden retirements of famed Disney Imagineers Joe Rohde and Kevin Rafferty were met with expected tributes, but also woeful projections of what this could mean for the Magic Kingdom.

What about the Tron coaster and the new Cirque du Soleil show and the Star Wars resort and the drastic transformation already announced for Epcot’s 40th anniversary in 2022? What of everything that would’ve, should’ve, could’ve come after that?

The last time the company painted itself into this corner, the internet was too young to hold it accountable.

When Michael Eisner and Frank Wells took the reins in 1984, a single Disney stock cost just under a dollar. By the end of 1989, it cost about eight. The ‘90s looked so bright they were branded - The Disney Decade. More parks. More attractions. More resorts. Onward, upward, and happily ever after.

“This is the ‘90s - the decade we re-invent Disneyland,” said Eisner to a room full of popping flashbulbs and pointing microphones in the Disneyland Hotel. It was overdue, considering the original park hadn’t seen a new land since 1972’s Bear Country. If anyone doubted the company’s commitment to its crown jewel, they had not one, but two primetime TV specials to change their mind.

Disneyland’s 35th Anniversary Celebration aired on February 4th, 1990 as an incarnation of The Wonderful World of Disney, not quite a month after Eisner’s press conference. It is, to put it mildly, a potent cultural artifact.

The special is framed as something the cast of Cheers (minus Ted Danson and Kirstie Alley) is watching at the bar instead of the usual, preferred mudwrestling. Tony Danza takes a Zoom call from Miss Piggy in the queue of Star Tours. Ernest P. Worrell waxes nostalgic about his first trip to Disneyland with his grandfather, who looks stunningly like Ernest P. Worrell. Will Smith and DJ Jazzy Jeff tie it all up in a neon bow with their rendition of “Supercalifragilisticexpialidocious.”  Executive produced by Halloween’s Debra Hill. Directed by Animal House’s John Landis.

The Celebration has the texture of fresh-spun cotton candy and only a little more nutritional value. It deserves closer inspection, if only as evidence of a company much looser around the collar - they dull the blow of Ronald Reagan’s appearance by having Woody Harrelson mistake him for an audio-animatronic. But time has borne it out as the less substantial of the two 1990 programs.

The Disneyland Story borrowed the name of the first ever Wonderful World of Walt Disney broadcast and premiered sometime after that 36-year TV staple ended. It’s hard to find any material on it at all besides the fact that it played on KCAL-TV in 1990, during the few years Disney owned the license.

Even if Wonderful World had held on, The Disneyland Story would’ve been an odd fit. If anything, it would’ve been more at home on Turner Classic Movies.

It opens with the cognitive dissonance of Sleeping Beauty Castle and Alan Silvestri’s Back to the Future score. To the average viewer, it’s confusing. To the average theme park fan, it’s blasphemy. But there is a reasonable excuse - train-based time travel.

Night Court star Harry Anderson emerges from a film-noir fog at the Main Street Station of the Disneyland Railroad. “This train usually goes around the park,” he says, “but today it’s going someplace else.” From the cushy confines of Walt’s personal Parlor Car, Anderson rolls into Disneyland history through the miracle of archival footage and rotoscoped fireworks.

For all but the most dedicated Disney scholars, it’s worth watching for the raw material alone.

Walt’s famous “Welcome” speech is just the jumping off point for opening day coverage. Qualified by Anderson as “the biggest live event in television history,” the grandeur of the broadcast hasn’t faded, even in black-and-white. Bob Cummings, Ronald Reagan, and Art Linklater take turns introducing attractions and atmospheres to the world. Cro-Magnon ancestors of the Seven Dwarfs invade Fantasyland. The future of Tomorrowland is established as a purely scientific prediction of the future, specifically the distant utopia of 1986. Then Walt blows his cue on national television, losing some luster and whispering to the cameraman, “I thought I had a signal.”

May not be much in the grand scheme, but The Disneyland Story pokes more holes in company mythology than any similar program would in the Airbrushed-Cigarette Era.

Visiting politicians are remembered in jazzy montage. Soviet Premier Nikita Khrushchev gets a special shout-out for being barred from visiting at the height of the Cold War. Day-one headlines spiral in, no punches pulled - Disneyland Shatters Illusion, Gripes Tarnish Disneyland’s Glitter, etc. Similarly blunt coverage underlines the company’s early ‘80s doom and gloom. Fat Cat Chasing Mouse may just be a retroactive way to set up Michael Eisner as saint and savior, but it’s a sacrilegious admission by modern standards.

Make no mistake, though, The Disneyland Story is still hagiography.

The fact that the cost of the park wasn’t deducted from employee paychecks is treated as an act of generosity by Uncle Walt. The grueling construction is doubled-timed away to the tune of “Whole Lotta Shakin’ Goin’ On,” with Disney villains occasionally interrupting to berate the workers. So threatens the evil queen: “You know the penalty if you fail.” Third-shift crews earn their own gratuitously stylized music video set to Eric Clapton’s “After Midnight.” The inside of a robot pirate’s skull gets more screen-time than a single employee’s face.

Disneyland is celebrated as an old friend, the cast members as flesh-and-blood animatronics in its life story.

Any past signs of weakness are admitted only out of present arrogance - The Walt Disney Company is ironclad and unstoppable once again.

The special ends with a boldly called shot, or rather five.

Anderson offers a peek into the future from his time-traveling train. In 1991, an ambitious stunt show based on the prologue of Indiana Jones and the Last Crusade would swing into Frontierland. In 1993, a Little Mermaid attraction would make its overdue debut. In 1994, George Lucas’s continued collaboration would bear terrifying fruit with Alien Encounter. In 1996, presumably after another sequel or two, Dick Tracy’s Crimestoppers would finally bring the man in the banana suit to theme parks. In 1999, Roger Rabbit would arrive in high-tech style with Baby Herman’s Runaway Buggy Ride as part of a massive Hollywoodland expansion.