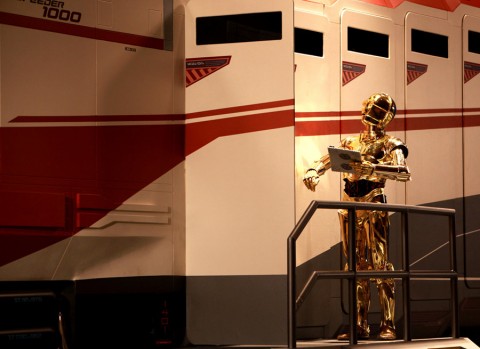 In an era where many effects, experiences, and even environments have gone entirely digital, there's still nothing that beats a real, in-your-face physical effect or an Audio-Animatronic encounter. But while many of the Best Audio-Animatronics in the World are concealed along dark rides' courses, hidden in queues, or even found outside of rides altogether, there's a rare collection that actually go along for the ride! Here are three on-board animatronics we love... Can you think of any more?

The original version of the Lost Legend: STAR TOURS is often remembered as the ride that launched the age of the simulator and the era of screens we now find ourselves in. But for all that Star Tours is associated with screens, one its coolest feats is that a real-life Audio-Animatronic goes along for the ride!

Replacing the beloved "Captain Rex" from the original, the newest iteration of the ride sees C-3PO himself accidentally forced to captain the StarSpeeder 1000, and the really-for-real robot is turbulently tossed to-and-fro during the mad dash across the galaxy. Talk about stressful working conditions! It's a miracle that the fairly-advanced figures (22 between Anaheim, Orlando, Tokyo, and Paris) don't short-circuit more often.

2. Rise of the Resistance

A second Star Wars ride to feature on-board Audio-Animatronics, the epic Rise of the Resistance sees guests hurriedly rushed aboard automated "Prisoner Transports" whose built-in directional Droids - R-5 units - have been reprogrammed by the Resistance. In fact, when guests' Transports pass empty ones, the R-5 units negotiate with their First Order twins (in a series of bleeps and bloops), assuring them we're merely being moved between cells. Our friendly R-5s help navigate the ship, narrate our escape, and even scan around corners and turn around to reverse!

Response to Universal's would-be sequel to the Lost Legend: Kongfrontation has admittedly been mixed. But one of the ride's more inarguably cool elements is the way it translated a segment of Hollywood's Studio Tour into a standalone ride. Namely, by turning "tram tour" segments into a standalone off-roading safari Jeeps. What's coolest is that the vehicles are technically trackless, but appear to be piloted by an on-board animatronic figure (visible behind frosted windows) who appears to have been pulled right from the ride's 1930s-esque Eighth Wonder Expedition Company! That means that when you re-ride, you may get a new "driver" and a whole new narration and perspective of the ride's story.

Winnie the Pooh in Tokyo has a car full of characters join in the fun!

But they don't ride in the same vehicle as the Guests, which was the point of the article. Lots of attractions have AAs in vehicles, just not your vehicle.

I'm a little concerned about the length of your featured articles lately. They're usually a few pages long and quite informative. They are the main reason I'm a regular reader. I hope these one page listicles are temporary.

Hi Aaron, thanks for your comments. Don't worry we are still publishing our longer featured length articles every month as usual but we are experimenting in addition to this with some shorter features to give our readers more content to choose from. We are hoping to expand the amount of shorter featured articles over the next couple of months but we will continue to have the same amount of longer in-depth featured articles each month as we have done over the last year. Thanks for reading and kind regards. Natalie