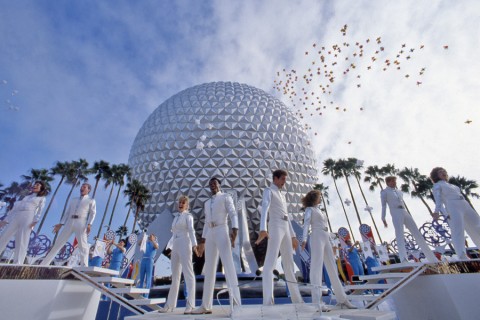 The 21st Century Begins October 1, 1982. So promised the opening day publicity of EPCOT Center. Though it would bear little resemblance to Walt Disney’s bleeding-edge civic center, the park was still a vision. It not only predicted utopia but built it ahead of schedule. Science and imagination shared the same zip code and you could see world peace from the edge of town.

Before any given guest crossed the turnstiles and took it all in for themselves, EPCOT Center needed a proper introduction. Even if they had seen the posters and the commercials, it was still dangerously educational, not a mouse in sight.

A mission statement was in order and, in just three minutes and twenty-one seconds without a single word, the “Main Entrance Medley” gracefully provided one.

It opens with racing violins, anxious shorthand for something profound and fast approaching. Analogue synths chirp a space-age love song, fading into strings and a more traditional kind of romance. The orchestra is shamelessly, hopelessly lush, until the instruments dwindle away into wistful solitude. Just as the loneliness gives way to contemplation, the band strikes up again. Then the synth. Then the pomp and circumstance. Finally, an old-fashioned crescendo. Watch your step and welcome to tomorrow, the ultimate fairy tale ending.

George Wilkins started his long tenure with the company under the aegis of Buddy Baker, the legendary composer responsible for over 200 Disney scores. Baker served as musical director for EPCOT Center, overseeing music park-wide. Though Wilkins would only compose his first attraction, Horizons, after his mentor retired in 1983, he was enlisted to arrange the all-important “Medley.”

Arrange is the keyword because, despite the song’s enduring connection to Epcot, most of its component parts came from a record store.

The “Main Entrance Melody” owes a lot to the “prog” half of “prog rock.”

The furious fiddling come straight from “Let It Lie,” a 1977 song by UK band Trickster. The Alan Parsons Project album Pyramid provided not one, but two pieces of the puzzle. “One More River” brought the synth and “Shadow of a Lonely Man” brought the strings. Further orchestral accompaniment came from Michel Legrand’s score to Le Mans. It can be heard in the last scene of the film or the track “Le Mans” from Legrand’s 1977 album, Beautifully Yours.

There are little references to other EPCOT Center themes in the mix, most notably Bob Moline’s “Energy (You Make the World Go ‘Round),” but the sound has outlived its samples. It appeared on the official album of EPCOT Center. It scored all of Future World in the 1995 virtual travel guide, The Walt Disney World Explorer. It inspired the sound of Epcot music to come, like the work of Innoventions composer Russell Brower.

Four decades and several music loop overhauls later, the original “Medley” plays on, still promising that the 21st Century should be starting any day now.