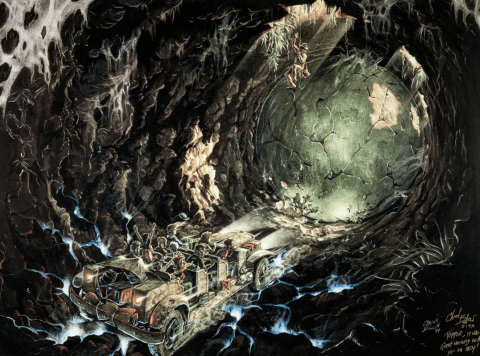 Here at Theme Park Tourist, we love to look at rides differently. In features across the site, we dissect fan-favorite rides and attractions to reveal the inner workings of Imagineering masterpieces. Along the way, we've tracked some of the absolute coolest moments, effects, and encounters you can find in Disney and Universal Parks, like 10 of Must-See Projection-Based Effects, 10 "How'd They Do That?" Effects that Amaze Us, 10 BIG Scenic Reveals That Give Us Goosebumps, and of course, our popular list of the 25 Most Incredible Audio-Animatronics on Earth.

But for many Imagineering fans, there's nothing quite like the classics... Even as projection, light, sound, animatronics, and – yes – screens become increasingly prevalent across Disney and Universal Parks, it's still practical effects – real, tactile, in-your-face, and physical – that seem to leave us astounded. These are the big ones – the effects that are so mesmerizing, surprising, and astounding, even seasoned Imagineering fans may not have recognized the complexity required to make them work.

Today, we've collected just a handful of some of the physical effects we love... true, practical, in-your-face effects that leave guests recoiling, ducking, shrieking, or just staring in awe as no screen can. Note that these effects often serve as big moments in the rides they occupy, so expect spoilers! And for each, we'll include a video that's already fast-forwarded to the big moment so you can inspect these effects up close... Which had you fooled? Which are must-sees for leaving first-time guests with their jaws dropped? Which of the hundreds of screen-free physical effects do you love most?

The Disneyland-exclusive Modern Marvel: Indiana Jones Adventure is widely recognized as one of the best dark rides of all time... and for good reason. The epic journey through the sunken river temple of the Lost Delta isn't just a stand-out entry in Disney's '90s 'Ride the Movies" era; it's a masterclass in in-your-face physical effects. After looking into the dark eyes of the lost god Mara, guests face a list of legendary booby traps from suspension bridges over steaming lava pits to explosive laser blasts; collapsing ceilings to blow dart corridors. But c'mon... No Indiana Jones adventure can end without a proper escape from a rolling boulder, can it?

In fact, the grand finale of guests' off-roading escape from the wrath of Mara is one of the most sensational practical effects at Disney Parks. Pulled into a dark cavern, guests see Indy hanging from a rope above, goading them to make room in the car for him. "Let me in, let me in!" But as he sways, a deep, booming bass signals the arrival of something big. Far off in the distance, shafts of light reveal a massive boulder rolling directly toward guests. Predictably, Indy changes his tune: "Get me out, get me out!"

As the boulder gains speed, heading right for riders, their trusty troop transport momentarily backs up before apparently realizing that's... not going to work. As John William's Raiders score crescendoes, the Jeep shifts into drive and goes pedal to the metal, racing drectly toward the approaching rock – nearly close enough to touch it! – only diverting down a hidden drop at the last possible second as riders instinctively duck! (Let's see a screen do that!) Falling through the dark, a resounding boom signals the boulder's end, and indeed, turning a corner, Indy wipes his brow and offers his final goodbye from in front of the cracked, steaming rock: "Next time, you're on your own!"

Skip right to it by playing the video below... Think you could figure out how it works on your first ride-through?

HOW IT WORKS: The boulder scene in Indiana Jones Adventure is authentically surprising enough to convince most guests that Disney really is releasing a very, very large rock to roll toward riders every 20 seconds or so. The truth is even simpler... even if it still requires precise timing. Inspired by a trip to a park-in-place car wash, Imagineers actually crafted a massive moving set. As the ride's Jeep enters the scene, it parks in place. It's the tunnel that moves around the vehicle which – when combined with the motion-simulating capabilities of the EMV ride system – convince riders that the car is backing up. Meanwhile, a separate apparatus with a continuously-spinning boulder approaches, paced perfectly with the sliding tunnel to create a nearly inescapable illusion that looks (and feels) pretty legitimately dangerous, but can effortlessly reset for the next lucky car of riders!

Imagineering fans could practically write a doctoral dissertation on STAR WARS: Rise of the Resistance – a ride which we suggest needs a whole new designation above E-Ticket... a "U-Ticket." The epic attraction makes stunning use of Disney's trackless dark ride technology, expertly fusing environmental, projection, and physical effects with a few key Audio-Animatronics to create a truly breathtaking experience. More to the point, the ride also has its fair share almost inexplicable effects... including the pair of our favorites: the one-two punch of two near-miss encounters with the ride's masked antagonist, Kylo Ren.

After their sneaky escape through the First Order's Star Destroyer is noticed by Kylo, guests' Droid-piloted prisoner transport vehicles race to escape. Heading for gantry lifts that lead to the ship's Escape Pods, the fleeing vehicles begin to back into the lifts, only to have Kylo Ren drop from above, ignite his distinctive, crackling, vented, jerry-rigged Lightsaber, and march menacingly toward guests.

Though the prison transports barely make it onto the lift before Kylo can reach them, they haven't truly escaped. As the lift begins to descend, a rare moment of tranquility seems to punctuate the high-stress escape plan... until Kylo's Lightsaber pierces through the lift's top as it descends, effortlessly carving through its ceiling like butter. The ride's on-board R-5 Droids recoil in terror, only narrowly escaping as the lift comes to rest. Think a screen could ellicit the same response from riders?

HOW IT WORKS: Though you can probably tell that Kylo himself is brought to life via Musion-style projection effects (and a screen that physically advances toward guests!), his Lightsaber is an ingenious physical effect. The sword actually does ignite and advances down a corridor toward guests, swinging perfectly in-sync with the advancing Kylo projection. Thanks to the moving screen and the very real light given off by the physical Lightsaber, the moment feels dimensional and real in a way a standard screen alone couldn't.

Believe it or not, the gasp-inducing moment on the elevator is actually one of the simplest effects on the list. The affected section of the lift's ceiling is really a very large panel with a semi-circular crescent cutout initially pivoted out of view from guests. On cue, the panel rotates just enough for a Lightsaber blade to pierce through the start of the cutout. Then, then panel simply rotates, with more and more of the cutout revealed, seemingly in the Lightsaber's wake. Projection effects add to the appearance of a hot blade melting a path, but the most convincing sensory input has to be the crackling, chaotic, sawing blade itself... actually produced by the imperfect saber spinning as the panel rotates.

When Universal's Islands of Adventure opened in 1999, the park was proudly billed not just as Universal's first real attempt to match Disney, but as "the world's most technologically-advanced theme park." Filled with cutting-edge animatronics, brand new ride systems, and sensationally-embedded 21st century experiences, the park was a triumph. But among its opening day anchors stood the curiously-confused special effects show, Poseidon's Fury: Escape from the Lost City. One of the few totally original, IP-free attraction invented for the ambitious park, Poseidon's Fury ended up being a bit of a mythical mess. In fact, we dove deep into the puzzling production of Universal's waterlogged walkthrough in its own dedicated feature – Declassified Disaster: Poseidon's Fury.

Even the "improved" version (which debuted after a hasty and complete rewrite in 2001) tends to leave guests nearly speechless... but there's one moment that's worth talking about. Sealed into an ancient chamber by a reawakened villain who seeks Poseidon's Trident, guests' fates fall into the hands of a guardian goddess who can only offer a path deeper into the temple... by way of a lost ancient connection to the ocean. As a mesmerizing stone doorway rotates its massive locks and rolls aside, the portal is formed... a bridge that passes through a dizzying vortex formed entirely of really-for-real water.

HOW IT WORKS: The Vortex is easily one of the most powerfully impressive practical effects in Orlando today, even if the mechanics are fairly straightforward. It's a 40-foot long tunnel with an 18-foot diameter. As the gate rolls aside, water jets activate, creating a tidal wave that overtakes the bridge, building in velocity until fast enough to "stick" to the cylinder's wall. Yep, you can even reach out and touch it... but your hand will quickly be ejected by the 100-mile-per-hour jets. The absolutely iconic effect (and the pretty darn cool moments that preceed it) are goosebumps-inducing enough to make even the most hardened insider feel a swell of emotion... and so far, to keep Poseidon's Fury open as the last IP-free attraction at the Universal Orlando Resort... Gulp.

These were all amazing, I really loved this article! I always want to know how things were done-- it doesn't diminish the wonder to me at all.