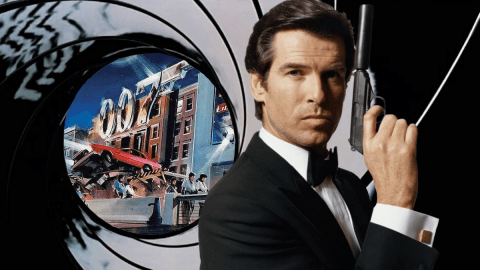 It wouldn’t be the holiday season without a James Bond marathon. The medium might change - streaming services now instead of basic cable channels dedicated to men and Cops reruns - but the world’s greatest secret agent never does. He always returns right on time, when the lights start to twinkle and the sinuses start to congest, regular as Santa Claus.

Next year’s belated release of No Time to Die makes 25 films in 59 years, the second-longest running franchise in film history behind only Godzilla. But even that sells the character’s legacy short. Publishing. Video games. Lifestyle brands of everything from wristwatches to sportscars. 007 is pop cultural force of nature.

And yet he’s only starred in a single theme park attraction, though not for lack of trying.

The first earnest attempt came about in the Hollywood East arms race.

Disney and Universal were locked in a dead heat to nail down the latest, greatest movies for their respective studio parks. Though they each had their respective libraries to fall back on, both companies looked farther afield for lucrative properties, occasionally in the same place. Disney made a play for Ghostbusters, fumbled it on a likeness snag with Bill Murray, and Universal picked up the ball, skirting the need for animatronic resemblance entirely.

The blue-sky dead heat between parks was so ruthless that Universal went after Bond, a franchise owned by Disney partner MGM/UA.

In 1986, about a year after Disney and MGM signed on their dotted line, Universal commissioned the Landmark Entertainment Group to work on concepts for a 007 stunt show. The team had already designed The Adventures of Conan: A Sword and Sorcery Spectacular for Universal Studios Hollywood and would soon after tackle the Ghostbusters Spooktacular in Florida. The so-called 007 JAMES BOND ACTION SPECTACULAR was one of four pitches aimed at the new park, but the only one with concept art from Star Wars legend Ralph McQuarrie.

His lavishly painted rendering covered all the bases of Landmark’s plan. A cavernous underground lair complete with overhead hangar doors just wide enough for a nuclear missile. The subterranean lagoon breached by a Soviet submarine mid-lasering. Bond’s most familiar foes watching on via too many big screens to count.

It’s striking, a lavish distillation of everything iconic about the franchise. If not for the rows of heads along the bottom, it could pass for the blockbuster finale of You Only Live Twice.

A treatment dated February 2nd, 1987 only cemented the unprecedented scale, promising “a fifteen-minute show filled with technological wonders, grand-scale explosions, high-tech transformations, and of course, humor; all the trademarks of the James Bond films.” Landmark even worked in a villainous Bond girl for the hero to seduce to his side of the Cold War.

For reasons now lost to time and non-disclosure agreements, the 007 JAMES BOND ACTION SPECTACULAR never happened. It could’ve been the sheer cost, but another possibility was the other rights-holder to the franchise - Eon Productions Ltd. Since its 1961 inauguration, the company has overseen every Bond film since Dr. No. To this day, it’s run by the children of co-founder Albert R. Broccoli. Careful control of the character is a family tradition.

Which is why the first, last, and only James Bond theme park attraction to ever break ground was a surprisingly faithful extension of the films at the time.

Despite iWerks Entertainment chasing the license with a motion simulator take on GoldenEye, Landmark fittingly scored the worldwide attraction rights to the 007 franchise. Though the end product of this golden-ticket deal would be another motion simulator,  James Bond 007: License to Thrill was wholly original.

MI6 needed new 00s. Luckily Q devised an elaborate front for testing potential recruits - a theme park attraction based in exotic ports of call like Cincinnati, Ohio. Wary passersby might notice the “007” planted among flowers, visible only by birds-eye, or the unmarked shipping containers from Universal Exports.

There were also massive signs screaming James Bond 007: License to Thrill and using Pierce Brosnan’s silhouette, for anybody less observant.

Depending on the location, props from various Bond films occupied the waiting areas. The North American installations got smaller vehicles, like the BMW R1200C from Tomorrow Never Dies. The London installation, on the other hand, got the amphibious Lotus Esprit from The Spy Who Loved Me and the Bede Acrostar Mini-Jet from Octopussy, along with a sizzle reel of series-best stunts.

The preshow was the same across the lot.

Dame Judi Dench reprised her role as M to present the latest mission of Her Majesty’s Secret Service. Dr. Callie Reeves, an esteemed seismologist, has just announced a breakthrough - a technological means to predict and prevent earthquakes by controlling tectonic pressure. Of course, this inspires bad guy Gunther Thorne to kidnap the good doctor and use this power, in M’s words, “Not to avoid earthquakes, but to trigger them.”

Fortunately, Bond is already on-location to save the day, wearing a very special pair of sunglasses described by Q as, “Kind of a high-tech view to a kill.”

Like his boss, the MI6 quartermaster is played by a familiar face, beloved Bond veteran Desmond Llewelyn. Not counting TV specials or commercials, the ride marked his sixteenth appearance as the character and sadly one of his last - Llewelyn would die in a car crash shortly after the premiere of The World Is Not Enough just two years later.

His warm-milk presence was put to good use in the preshow, assuring recruits that it’s all a glorified physical. He’ll be monitoring their vitals as they see what Bond sees and live how Bond lives on his latest mission.

Though that mission, the ride film itself, is now considered lost media, the script survives thanks to the Wayback Machine and the long-defunct Landmark website.

Once everybody’s strapped in - “Even secret agents are required to use seatbelts,” admonishes Q - the live feed opens on Dr. Reeves wrapping up a press conference outside the Geo Thermal Institute.

A helicopter interrupts with a well-placed missile, then Gunther and friends arrive on their motorcycles. Just as the bad guy grabs the doctor, Bond arrives on his own motorcycle, punches one henchman, and shoots another.

“System on,” he says, bringing the room full of 00-hopefuls into his head.