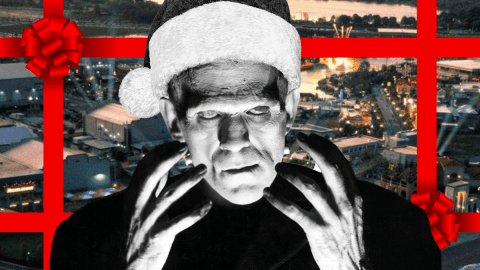 Christmas may not be the holiday that Disney tried to trademark - that would be Dia de Muertos - but it’s easy to forget they don’t own a piece. Disneyland has been celebrating since 1955. Mickey’s been throwing his Very Merry Christmas Party at Walt Disney World since 1983. Santa Claus still waves from the back of the parade, regular as a Vegas showman in a special engagement. It wouldn’t be Christmas morning without an ABC special showing off the latest Disney stars in the busiest Disney parks. Festive plushes updated and marked by year sell out of local Disney Stores long before “Last Christmas” reaches the radio waves.

It doesn’t take a vacation to notice that Disney and Christmas go together like milk and cookies.

Universal, the studio that horror built, is a stranger fit.

The resort didn’t even get a dedicated mascot for merrymaking until 2000, when Ron Howard’s How The Grinch Stole Christmas became the second-highest-grossing Christmas movie of all time. The now-signature Macy’s parade arrived the following year.

Like too much early Universal Studios Florida history, all the festivities prior live on only in moldering home videos and the few brochures not used as kindling. At least Halloween Horror Nights has its historians. Christmas, by contrast, is almost a complete wash.

But there’s enough left to paint a picture.

The park was supposed to be a Christmas present itself, ready to be unwrapped in December of 1989.

In December of 1990, six months into its delayed existence, Universal Studios Florida was lucky to be alive. The only extracurricular mirth was New Year’s Eve, rung in with a brand-standard massive explosion.

By 1991, with the fashionably late arrival of Back to the Future: The Ride, the park could afford to celebrate. HHN arrived in primordial form as “Fright Nights” and Christmas finally came.

Wreaths graced the streetlamps down Hollywood Boulevard. Horse-drawn carriages roamed the park with bridle done up in bows. Santa posed for pictures under the Battery Park shelter. To find him, guests just had to follow the 40-foot pine.

Beyond that, the decorations were simple and sparse. The park’s walk-around cast did a lot of the heavy lifting - the Ghostbusters mounted a small Christmas tree to the roof of Ecto-1, strung garland across its gizmos, and donned Santa hats for their hourly dance battle with Beetlejuice.

By 1992, the holiday had a name and Universal’s “Old Fashioned Christmas Party” had merchandise.

Everybody from Scooby Doo to Woody Woodpecker dressed in their seasonal best. The park music loops were interrupted with radio-weary hits. The 40-foot tree was moved to the intersection of Hollywood and Sunset and anchored by a stage made of oversized presents. There sang the Studio Carolers, a group of eight performers in ugly sweaters or, as they were known at the time, sweaters.

In what would become Universal Christmas precedent, most of the pomp and circumstance was saved for New York.

A special quartet crooned Johnny Mathis covers from the Blues Brothers stage, freshly adorned with evergreen trim. Snow fell from the rooftops. An ice rink and toboggan chute offered the best frozen entertainment the entire state of Florida had to offer. Santa moved into a soundstage with room enough for a workshop and full elven staff. One end of Delancey Street was done up for Hanukkah.

The non-Halloween holidays were coming into their own, but Universal was still Universal - the nightly lighting of the 40-foot Christmas tree was commemorated with a massive explosion and followed by a performance of the Dynamite Nights Stunt Spectacular.

By 1994, the non-Halloween holidays earned their own map.

“Celebrate the Holidays,” it begged, for five whole days.

From December 19th through the 23rd, guests could stuff their stockings with all sorts of limited time cheer. The rechristened Universal Holiday Brass played around the park five times daily. The Blues Brothers cleaned up their act with a few glad tidings of great joy. Cartoons and legends took turns mugging in front of the Christmas tree, which had been uprooted to a familiar corner of Gramercy Park.

It may have been less elaborate - ice skating and tobogganing were dropped - but it was as established as the season had ever been. Halloween Horror Nights found its footing and its fans. Christmas wasn’t there yet, but at least it was part of the club - the map offered admission to the New Year’s Eve Blowout for just $10.95 more.