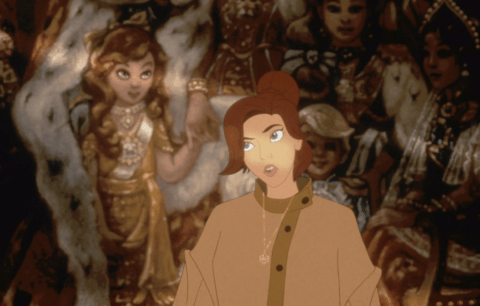 CONTENT IS KING - that was the title of a 1996 editorial by Bill Gates, who wrote that the Internet would disrupt entertainment in a way unmatched since the home television a half-century earlier. He reflected that in television, "the long-term winners were those who used the medium to deliver information and entertainment." To Gates' thinking, the Internet offered the same opportunity... and even then, he suggested that the wise would invest in entertainment on the then-new World Wide Web.

Now, a quarter century later, we can see that Gates' prediction wasn't just right on the mark; it was practically prophetic. Spurred by the 2010 opening of the Wizarding World of Harry Potter, we can see the battle of content play out as Disney and Universal each reach for high-earning film (and video game) franchises to translate into themed environments. But even as billion-dollar theme park projects clash in battle, the war is even larger. The "Content Wars" have redefined entertainment in the 21st century. Accelerated by the pandemic, streaming has usurped all other forms of traditional media, and he who has the most valuable IPs has the lead.

To see "Content Wars" in action, look at Disney+. During its first year, Disney's over-the-top streaming service mostly served as a quasi-archival unit of the company; a fun but unfancy service for families, replacing the need to keep shelves stocked with DVDs of Disney's back catalogue. Sure, the occasional "Disney+ Original" might include a family holiday movie or an unscripted family baking show... even the more prestigious drop like the long-awaited Imagineering Story docu-series or the revolutionary Mandalorian. But after Disney's December 2020 investor call and its 100+ announcements, it's clear that a year after its launch, Disney+ is about to become the central battleground in the Content Wars.

So maybe it's time to pause for a moment and appreciate the catalogue of content Disney is assembling... With over a hundred billion dollars in content acquisitions over the last twenty years alone, Disney is truly building a content kingdom few can rival... And as a result, you may be surprised what's technically part of the Disney family now, what's soon to be streaming on Disney+, and – eh hem – what may or may not find its way into Disney Parks... Get the full story on Disney's history of acquisitions below, to jump to page 2 to cut right to the list!

In 1987, then-CEO Michael Eisner set the stage when he officially renamed Walt Disney Productions to The Walt Disney Company. Inherent in Eisner's era was the promise that "Disney" would not be merely a movie studio relying on a back catalogue from "the glory days" and some accessory theme parks; it would be a global entertainment company, eventually fulfilled via international resorts, prestigious hotels, convention centers, Disney Cruise Line, Disney Vacation Clubs, Disney Channel, Radio Disney, Hyperion Books, Hollywood Records, DisneyToon Studios, Touchstone Films, and more.

But even as Disney's footprint and media expanded, Eisner knew that content is king. That's why Eisner's Disney forged once-unprecedented partnerships with creators like George Lucas (igniting the Lost Legends: Captain EO and STAR TOURS) and Jim Henson (with whom Imagineers drafted the never-built Possibilityland: Muppet Studios), bringing the characters people cared about into Disney Parks, even if they weren't Disney characters; why he imbued Walt Disney Feature Animation with the filmmaking talent needed to jump-start the Disney Renaissance and built the company's modern character portfolio; why he greenlit the Disney Princess franchise, utilizing the company's catalogue new and old (today, worth about $3 billion per year)... and most importantly, why he began acquiring...

In 1995, an unimaginable $19 billion purchase saw Disney acquire ABC and ESPN – stepping stones on Eisner's path to making Disney an international multimedia giant. The following year, the acquisition of MIRAMAX added prestige to Disney's live-action studio. In 2004, Eisner's long-running love affair came to fruition when Disney acquired THE MUPPETS for $75 million. When he exited the company soon after, it was on infamously frosty terms, with Eisner's last decade having been marked by 'brand withdrawals' like underbuilt theme parks, cash-grab projects, defected executives creating competing animation studios, the apparent end of Disney's box office reign, and broken allegiances with Steve Jobs' Pixar whose box office and critical fortunes has risen as Disney's fell...

But Eisner's role had been invaluable. He'd begun the company's pivot toward the international media giant we know today, and his stepping-stone acquisitions gave Disney the platforms it needed to begin sharing the content that was soon to come...

When Bob Iger was appointed CEO after Eisner's exit, he famously recognized the coming Content Wars when – at the 2005 opening of Hong Kong Disneyland – he noticed that Pixar's characters of the '90s and 2000s got twice the applause of Disney's decades-old legacy characters. And just like that, Iger opened his tenure with one of the gutsiest moves in corporate history: in 2006, he purchased PIXAR for $7.4 billion and (brilliantly) retained its brand and organization independent of Disney Animation's, elevating Pixar figureheads to oversee both.

Two years later, just as the first films post-Iron Man made their way to theaters, Iger made another risky buy: for $4 billion, Disney added MARVEL ENTERTAINMENT to its ranks, supercharging Disney's character portfolio with (literally) thousands of characters (with the asterisk that many had already been licensed by Marvel pre-Disney to Universal, Paramount, and Sony). Still, the elevation of Kevin Fiege to oversee the burgeoning "Marvel Cinematic Universe" was like pouring gasoline on the slow-burning hero-tinged pilot light lit by 2000's X-Men. Slowly, Disney's heroes would become the hottest global property on Earth and with a limitless universe in which to explore it... and not for nothing, they'd also found their counterpart and complement to the Disney Princess franchise.

What could possibly compete with the acquisition and expansion of Marvel? In 2012, Disney's three-decade flirtation with George Lucas paid off. With Lucas himself eager to retire – but reticent to sell or hand-off the studio and its priceless character portfolio to just anyone – Iger swept in. For $4 billion, Disney gained STAR WARS and INDIANA JONES outright (though 20th Century Fox and Paramount retained the distribution rights to each, respectively). As we know, at least the former has become a multi-billion-dollar cornerstone of Disney's projects in the ten years since with a (literal) galaxy of stories, spin-offs, feature films, animated series, ten (yes, ten) Disney+ Original Series, books, comics, costumes, toys, and – oh yeah – two billion-dollar theme park lands.

Then there was the big kahuna. Unimaginable. Unprecedented. Unbelievable. In a shocking show of the Content Wars, in 2017, Disney made the announcement that it intended to purchase competing studio 20TH CENTURY FOX in its (near) entirety for (gulp) $52 billion. That's more than Pixar, Lucasfilm, Marvel, and the Muppets combined. To be clear, there's a good reason for the price... and in retrospect, $52 billion would've been a steal.

20th Century Fox isn't "just" a niche IP like Marvel or Star Wars. It's one of the "Big Six" studios in Hollywood; literally, the equivalent of Paramount buying Universal. If it were successful, Disney's purchase of 20th Century Fox would imbue Disney's catalogue with an authentically-prestigious Hollywood studios' worth of legendary pictures from the 1930s on (think Miracle on 34th Street, The King and I, Planet of the Apes, and Cleopatra) as well as hundreds of modern classics (including Castaway, Mrs. Doubtfire, Moulin Rouge, The Rocky Horror Picture Show, The Princess Bride, Home Alone, and TITANIC), not to mention Blue Sky Studios, FX, and a dozen other modern media businesses. Interestingly, it would also give Disney complete distribution control of the original six Star Wars films...

Disney's industry-shaking plan, however, was nearly derailed. In a move that'll strike close to home for theme park fans, Comcast (owners of NBC Universal) bid on 20th Century Fox, as well, upping the ante to $65 billion. Would Disney blink and fold? Of course not. In 2019, Disney finalized the deal with a monstrous final sum of $71.3 billion, adding the (renamed) 20th Century Studios, Searchlight Pictures, Blue Sky Studios, 20th Television, FX, National Geographic, Star India and Fox's 30% stake in Hulu (which, when added to Disney's, essentially make the streaming service theirs).

And literally overnight, the definition of "Disney" changed. You know Mickey and Snow White; Peter Pan and Pinocchio; Aladdin and Ariel are "Disney." By now, you may even be used to Iron Man and Captain America; Buzz and Woody; Kermit and Piggy; Luke and Leia; Rey and Grogu being "Disney" too. But that's just the start. With a century of IP added to Disney's portfolio, countless, priceless stories are now Disney's to explore... On the next page, we'll break down 10 of the most exciting, interesting, and surprising modern IPs that just might make its way to Disney's brand... and Parks...

I hate to be "that guy" and nit-pick an article, but I found a few typos:

The photo from Star Wars of everyone in the Millennium Falcon is flipped. You can tell because Chewbacca's ammo strap always goes over his left shoulder (which would be seen on our right).

Thanks for the heads up on these, they have been changed apart from the photo. Apologies and thanks for reading.

Discovery Inc doesn't own History Channel. They are fierce competitors. History is owned by A&E Networks, which is a joint-venture between Hearst and... Disney.