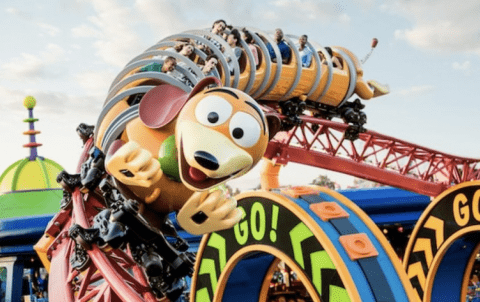 Story, story story. If you ask just about anyone at Walt Disney Imagineering or Universal Creative, you'll pretty consistently hear that absolutely nothing is more important than story. And it's true that – post-Hogsmeade – both of the world's two preeminent themed entertainment design firms have doubled down on "living lands" plucked from the screen and the massive mythologies (and staggering budgets) that come with them. Increasingly, the standard by which fans measure Imagineering projects has lept foward, requiring in-universe snacks, souvenirs authentic to the worlds Imagineers craft, and rides physically and narratively embedded in the lands.

On one hand and to the tune of billions of dollars, the next generation of theme park projects have spared no expense in eliminating narrative and visual intrusions: No "Disney Parks" shopping bags; no Coca-Cola; no LEGO sets; no exposed showbuildings; no bare steel thrill rides. Yet on the other hand, a number of recent projects have given fans pause. In at least a few high-profile projects, Disney and Universal seem to have agreed that the standards they themselves created can be relaxed a bit. Discussion boards and social media have sprung to life with debate: what, exactly, is the role of the "bare, steel coaster" in Disney and Universal Parks? As designers abandon carefully-curated "mountains" and contrived backstories to explain the presence of coaster trains, the "roller coaster themed to a roller coaster" may very well be a newly-allowed tool for designers.

But the presence of steel supports, sleek coaster track, and screaming riders isn't going by unnoticed... or is it? Today,  we'll take a look at five "bare, steel" coasters that have drawn serious debate and discussion on theme park website, discussion boards, and social media. Where exactly are bare, steel coasters allowed? Can they be at home, even in highly-immersive lands? How can or should designers keep the next era of thrill rides from negatively impacting park-wide sightlines? Should we care?

What happens when Andy uses Tinker Toys, K'NEX, and a couple of Slinky Dogs to build in his backyard? Simple: you've got the perfect excuse to build a family roller coaster! Okay, look, we'll be the first to admit that Toy Story Land isn't exactly the magnum opus of Imagineering. Quite the contrary, the project is somewhat infamous for being plopped into Disney Parks that need a "cheap and cheerful" expansion of ride capacity, fast. From Hong Kong to Paris to Shanghai, the quick-fix infusion of lightly-themed flat rides and a beloved IP unusually indicates to fans that a park needs help. At least in Hollywood Studios' case, that help was needed for a good reason – the imminent arrival of Galaxy's Edge – and executed fairly well!

But Slinky Dog Dash makes no apologies about being what it is: a bare, steel roller coaster.

Sure, Disney's slightly-contrived environmental attempts to explain it away are cute enough, and if you're determined to believe that you've shrunk smaller than a toy, you can certainly excuse the ride away as a Franken-toy of Andy's design. Admittedly, that probably works in Toy Story Land, where building an artificial "mountain" around the ride would've actually been less authentic to the Toy Story style. (Again, hence why Imagineering pulls this concept out when a low-cost addition is needed – bare rides don't just work; they're preferable.)

Still, you can see what we mean here: an exposed, steel roller coaster is hard to come by in Disney Parks, and usually when you see it, it's embedded into the narrative and environment. But Slinky Dog Dash uses only the flimsiest of excuses to permit its own existence. Is that okay in Toy Story Land? Is the experience worth the frustration that a certain segment of fans feel? Does a bare, steel coaster cease being "just" a bare, steel coaster when you're meant to imagine it's made of toys? Probably! But our look at "roller coasters themed to roller coasters" is just beginning...

Look, far be it from us to decree Universal's Islands of Adventure as being "too good" for bare steel coasters. After all, while insiders often cite the park's 1999 opening as the first legitimate attempt to creatively match Disney Parks, two of its anchor attractions – the Incredible Hulk Coaster and Dueling Dragons – were both massive, sprawling, iconic B&M coasters whose bare steel track and supports dominated the skylines of Marvel Super Hero Island and the Lost Continent, respectively. So it's fair to say that from the start, Islands of Adventure was a mix of cutting-edge, immersive, literary lands that sometimes not-so-accidentally had illusion-shattering elements on full display.

When the Wizarding World of Harry Potter was officially opened at the park in 2010, it very literally created the "living land" formula for theme park projects going forward. Recreating the village of Hogsmeade as seen in the films to exhausive detail, the Wizarding World didn't just maintain a visual commitment of a to-scale replica of the town, but a narrative one. Hogsmeade famously omitted Coca-Cola, meet-and-greets, and Harry Potter LEGO sets, insisting only on "in-universe" snacks and "in-universe" souvenirs. There was just one big, huge problem. Having taken over the Lost Legend: The Lost Continent, the Wizarding World also inherited one of its opening day attractions... Dueling Dragons. The ride was hastily dusted with placemaking and renamed to fall into the Potter ethos, but the Crayola red and blue tracks looming just beyond the village were – frankly – barely excusable, but overlooked by fans eager to shower the land with well-deserved praise.

The Dragons were finally felled in 2017, and in 2019 the enormous plot of land became home to Hagrid's Magical Creatures Motorbike Adventure. Despite the tragic loss of the Dragons, it's pretty universally agreed upon that Hagrid's is a much better use of the land. The ride uses just about every square foot of the plot Dragons vacated, largely following the terrain and keeping below tree-level. The few moments when its track technically breaks the Forbidden Forest's treeline are disguised from onlookers (and even from riders). As a result, the ride provides a picture-perfect setting to be nestled beyond Hogsmeade and at the foot of Hogwarts' cliffs: endless forests with the ruins of an old stone abbey within.

A family coaster by its statistics, Hagrid's Motorbike Adventure is technologically astounding (and fittingly temperamental), with more moving parts and surprises than practically any other coaster in Orlando. But for all its infamous faults, one of the ride's is the most apparant: neither Universal nor the ride's manufacturer, Intamin, found a way to actually make Hagrid's motorbike fly. So yes, the ride many proclaim as among the best ever (and certainly a top contender in Orlando) is – gasp! – a bare, steel coaster, with bare, steel, brown track tearing through one of the most immersive "living lands" ever. But I guess that goes to show that not all "bare, steel" coasters are made equal. Hagrid's may be a "bare, steel" coaster, but it's not a roller coaster themed to a roller coaster; it merely asks onlookers and guests to pretend the track isn't there. And frankly, most riders seem happy to do so.

When Shanghai Disneyland opened in 2016, armchair Imagineers across the world began assembling a wish list of Chinese originals to export back to parks in Florida and California. Given Disney's typical preference (and sometimes, requirement) to keep attractions exclusive at its international parks (which are often partly or majority owned by foreign governments), it doesn't happen frequently... But at the semi-annual D23 Expo in 2017, Imagineers made the surprise announcement that Magic Kingdom wouldn't just be getting a new ride for the resort's 50th Anniversary; it would build a copy of Shanghai's starring E-Ticket Modern Marvel: TRON Lightcycle Run.

In Shanghai, TRON Lightcycle Power Run takes the place of a Space Mountain in the park's lineup and layout; in Magic Kingdom, it's coming to life next to the '70s icon. Unusually, that'll give Magic Kingdom's Tomorrowland two vastly different roller coasters with two vastly different styles, set down directly next to each other. Yes, Space Mountain's iconic Space Age cone will now reside just next to a stunning, glowing, liquid-glass canopy of pixel panels distinctly of the 2020s+. Fans' typical rage at such a visual intrusion is probably lessened for two reasons: first, that it's just one more visual intrusion into an already cluttered "lost cause" of Tomorrowland, and second, TRON is going to be really, really good.

That's probably also why detractors of TRON's bare steel coaster component have also been mighty quiet. Yes, the coaster begins with a high-speed launch out of the ride's digital, glowing "Grid," where it races through broad daylight, overtop of crowds, snaking beneath the undulating glass canopy before disappearing back into the building. And okay, technically, the blinding blitz outdoors is narratively suspect in a ride meant to drop us into TRON's iconic digital world. But the brief appearance of the coaster's track and supports is – again – largely forgivable since the manuever is obviously the ride's most iconic.

Besides, are we really going to split hairs about immersion and world-breaking visuals in a land populated by Buzz Lightyear, Stitch, and Mike and Sully? Speaking of which...