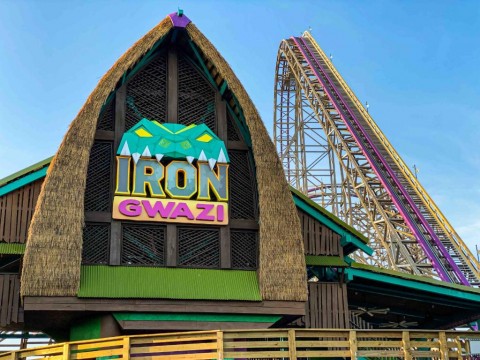 It would be an understatement to say that 2020 was an unexpected year for the theme park industry. With COVID-19 shutting down parks across the world, the majority of new-for-2020 coasters were pushed back due to constraints in funds, labor, and safety. Some coasters did manage to make their debut in the 2020 season, like Candymonium, a B&M Hypercoaster at Hershey Park, and Texas Stingray, the tallest, fastest, and longest wooden coaster in Texas (which actually managed to open just prior to COVID-19 closures). In addition, there are also some 2021 coasters that were announced as 2021 coasters, like Universal’s VelociCoaster, or TMNT Shellraiser and its fellow coasters that opened alongside the indoor Nickelodeon Universe park.

But what about the forgotten coasters of 2020, the ones that were quietly pushed back due to these aforementioned restraints, the 2020 coasters that became 2021 coasters?

There’s no lack of discourse surrounding this record-breaking RMC, but the hype surrounding this upcoming Busch Gardens coaster has only grown since it was pushed to the 2021 season. After being widely considered the most highly-anticipated coaster of 2020, it’s defending that title for the second year in a row, as Busch Gardens fans and coaster enthusiasts are so ready to flock to the park next Spring when Iron Gwazi makes its long-awaited debut. It’s driven fans (present company included) wild seeing this massive coaster standing but not operating for the past few months, but we’re closer than ever now. In recent weeks, the queue line and entryway have taken shape, and the coaster is seen running quite frequently.

Iron Gwazi, known as infamous dueling coaster Gwazi prior to its overhaul, will open as the world’s tallest and steepest hybrid coaster. Rocky Mountain Construction, the beloved manufacturer behind the project, specializes in their groundbreaking I-Box track, taking past-their-time wooden coasters and making them into beasts of steel and wood like we’ve seen in the likes of Steel Vengeance and New Texas Giant. To get a deep dive on Iron Gwazi and its rocky history, check out this oral history. You can catch a ride on Iron Gwazi in spring 2021, but if you really can't wait, the park recently dropped its official POV.

Another mammoth of a Busch Gardens project, Pantheon was first announced in August of 2019, flaunting the title of “Fastest Multi-Launch Coaster in North America,” reaching speeds of 72.5 miles per hour. This Intamin multi-launch coaster will feature four launches (one of which being a backwards launch) and a 95 degree drop off a massive top hat element. Virginia coaster fans were naturally excited about this addition to the park. Though it came only a few years after Tempesto, another multi-launch coaster, this one manufactured by Premier Rides, the two coasters have massively different focuses. While Tempesto is a cloned attraction with a small footprint, focused on its tall inversions and quirky non-inverting loop, Pantheon broadens the scope. This is a massive ride, spanning a large section of the park with two inversions and a height of 180 feet.

The coaster still displays its honor of “Top 10 Coasters of 2020” on the Busch Gardens Williamsburg site, but they may have to go to bat to retain that title as we enter the 2021 season, as Busch Gardens quietly pushed back the ride’s opening in the summer of 2021. It shouldn’t be a difficult task—Pantheon is unlike anything Virginia, even America, has seen before. While Cedar Point’s Maverick is an Intamin multi-launch as well, it is of a former era of Intamin coasters, with starkly different track, trains, and elements. Intamin has come a long way in the past ten or-so years, bringing their talents to the European market in rides like Taron at Phantasialand and Taiga at Linnanmäk, and American coaster enthusiasts are about to see just that in Pantheon.