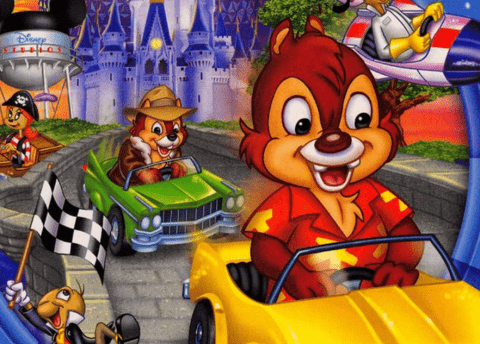 Since 3D Crazy Coaster graced the Vectrex in 1983, theme park video games have come in two flavors - simulation and minigame collection. Disney’s done both, from Adventures in the Magic Kingdom on the Nintendo Entertainment System to the Coaster series on PC. There are highs and lows of both styles - Virtual Magic Kingdom, a glorified ad campaign, was so beloved it lives on as a fan-made recreation - but it's the outliers that are most interesting.

Of those few, Walt Disney World Quest: Magical Racing Tour is the farthest afield. It's also a contradiction down to its CD-ROM soul - a one-of-a-kind knockoff.

Released in all territories within six months of the Nintendo 64's release, Mario Kart 64 provided the new console with its first multiplayer killer app. Instead of taking impatient turns running around Super Mario 64, players could now run into three other friends simultaneously. It wasn't just more play for the money - it was free advertising for Nintendo's 3D miracle machine and boy did it work.

Mario Kart 64 remains the second best-selling game of its console and the fourth of its generation. The legacy of the series, twelve releases and four generations later, is unquestionable.

The fallout of the series is a lot easier to question.

What do Smurfs, M&Ms, and the Burger King have in common? They all starred in their own kart racing games, for better or mostly worse. Mario Kart 64 started a licensing gold rush. Every company, ad campaign, and out-of-fashion cartoon with a cast of marketable characters got in on the fun. The best pretenders to the throne came from within the medium - Diddy Kong Racing on Nintendo 64 and Crash Team Racing on PlayStation. Everything else was a crapshoot. Flawed standouts took inspiration from floundering multimedia franchises (Muppet RaceMania) and inherently plotless toylines (Lego Racers).

And then there’s Walt Disney World Quest: Magical Racing Tour, the only Mario Kart knock-off based on a theme park. Stranger yet, it doesn’t even pass the “cast of marketable characters” test.

If gamers wanted to personally run Donald Duck off the road, they’d have to wait until Christmas 2000 for Mickey’s Speedway USA. The game with Disney in title shipped months earlier with no playable racers more famous than Chip or Dale.

Given the proximity and blindspots of the titles, it’s not hard to see a contractual symbiosis between Mickey’s Speedway USA and Walt Disney World Quest: Magical Racing Tour.

Speedway was developed by the legendary Rare, then-veterans of Diddy Kong Racing and soon-to-be famous for Banjo-Kazooie, only for the Nintendo 64. It made sense for all parties involved. Disney put its most famous characters in the hands of the most famous kart-racing studio for a stacked-deck debut on the console most famous for kart-racing.

Walt Disney World Quest feels like leftovers by contrast. Chip, Dale, and Jiminy Cricket are the only household names in the roster. Besides his triune silhouette, Mickey Mouse is entirely MIA. Crystal Dynamics, riding high off its Gex series, handled development despite little racing experience. It was eventually released on all major contemporary consoles except the Nintendo 64.

Time and the internet have been kind to Mickey’s Speedway USA, a solid entry in a beloved genre by a beloved developer on a beloved console. It’s the kind of game tailormade for “hidden gem” re-examination, despite critics at the time taking issue with its bland simplicity.

Time and the internet both seem to have forgotten Walt Disney World Quest: Magical Racing Tour. Archived reviews only gave it exhausted endorsement - IGN hedged its thumbs-up with, “Nobody NEEDS another Kart racing game.” The occasional YouTuber plays it for a lark now and again. But by and large, Magical Racing Tour doesn’t have nearly the nostalgic prestige of Speedway and that’s an absolute crime.

There may be no greater must-play for Walt Disney World die-hards.

The story centers on a one-off piece of park lore - the Walt Disney World Magic Machine. It looks like a Mary Blair moonlander and makes the fireworks, uh, work. When Chip and Dale, still observing Rescue Rangers dress code, find the contraption behind Cinderella Castle, they do what any self-respecting guests would: stuff it so full of nuts the thing implodes.

The quest in Walt Disney World Quest is to find the scattered debris before showtime, wherever it may have landed on property. Fear not, though - there’s no time limit here. The plot’s just an excuse for Eddie Carroll, the longest-serving Jiminy Cricket, to spin the opening cutscene like a fairytale and then get out of the road. The crucial difference between Magical Racing Tour and Speedway, not to mention its knock-off colleagues, is that the courses are the characters.