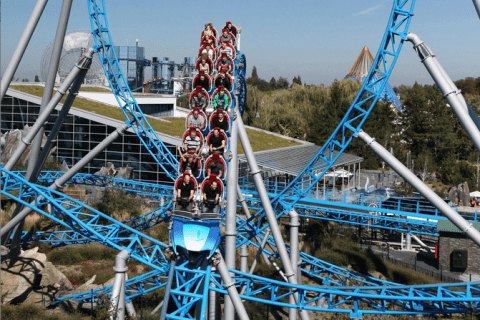 In 1975, the family behind Mack Rides opened a park that would be, first and foremost, a showroom for their constantly innovating attractions. Mack Rides began in the late 18th century as a manufacturer of carriages and wagons, slowly but surely breaking into the amusement market in the centuries that followed. Franz Mack, who inherited the company in the 1950s, made the proposition after a trip to the theme parks of the United States: to open a park so picturesque, so beloved, where Mack Rides attractions can shine. Thus, Europa Park, a behemoth bucket list park, was born.

Europa Park is appropriately themed to the continent of Europe, paying homage to countries like Italy, Russia, Switzerland, and England in themed areas that would rival those found at Disney or Universal. Comparisons may be made to Walt Disney World's Epcot, in Europa Park's themed foods, gorgeous walkways, and giant white globe centerpiece, but Europa Park operates a bit differently. Where Epcot has been criticized for its inundation of intellectual properties, with the loving-yet-biting nickname IP-cot gaining traction in recent years, Europa Park is filled with street performers and shows, all featuring characters original to the park. In addition, Europa Park—naturally, as a showroom for Mack Rides—has a far better-rounded ride lineup than the Florida park.

Europa Park has been awarded the title of Best Park by Amusement Today’s Golden Ticket Awards every year since 2014, but its biggest competitor is not Epcot. This park is frequently neck-and-neck with America’s Cedar Point, and lost to the Ohio park in 2013 by a margin of less than one percent. The parks are commonly known as the best in the world, with a very different set of offerings found at each. These two parks, though both beloved and outstanding in their own right, are not two sides to the same coin. Where Cedar Point is an amusement park in the truest sense of the word—midways and ferris wheel and thrill rides—Europa Park may cater to a broader audience. Yes, Europa Park is an amusement park. It’s also a garden. It’s also an eatery. It’s also a museum. It’s also a trip around Europe. It’s been said before that certain parks have something for everyone, but has never been more true than in the instance of Europa Park.

Europa Park is made great by its rides, but it is made unique by its beauty. The park's 235 acres are bursting with flower displays, scenic walkways, and realistic storefronts. Though most sections are themed to countries in Europe, certain areas are more specific or story-driven. Take the fairytale-themed Grimm's Enchanted Forest, which is shrouded in the shade of trees and spiraling staircases straight from a storybook.

The park offers an array of food options, and though the eat-around-Europe concept is a mouth-watering one, there's one restaurant at the park that will be particularly alluring to any coaster enthusiast. FoodLoop features a menu not unlike anything else you'd find at a theme park, but what's interesting is how the food gets to you, through twists and turns, S-curves and even vertical loops, right to your seat. There are a few FoodLoop locations around the world, but Europa Park's was the first.