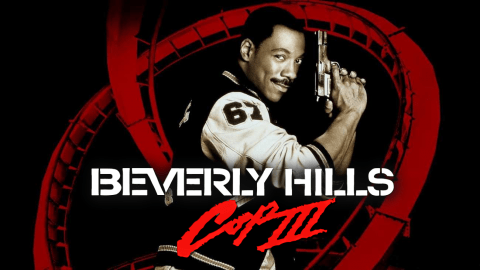 Long before the original became the highest-grossing movie of 1984 and, briefly, the highest-grossing comedy of all-time, Beverly Hills Cop was a joke Sylvester Stallone didn’t get. Danilo Bach’s original script, called Beverly Drive, was an action movie. Daniel Petrie, Jr. rewrote it into a comedy. Riding high off the one-two punch of Rocky III and First Blood, Sly the star knew where his bread was buttered and Sly the writer quickly sanded off the sense of humor. With the price tag inching higher than Paramount expected to pay and the movie straying from what producers Jerry Bruckheimer and Don Simpson intended to make, a tough call was made. Stallone bowed out gracefully, taking his rewrite with him and turning it into Cobra a few years later.

Two days after Sly was out, Eddie Murphy was in. The 23-year-old comedian made a white-hot name for himself on Saturday Night Live and proved his box office bonafides in two-handers like 48 Hrs. and Trading Places. It was time to give him a movie of his own.

Martin Brest might’ve directed it, but Beverly Hills Cop will always be Eddie Murphy’s movie. As Axel Foley, he improvised his way through the patchwork script. He sold a life-long friendship in two scenes with unexpected warmth. He even made the running, jumping, and falling down look good. The film’s scrappy and sincere energy is his own. It was as much a performance as a mission statement.

There was a new star in town and a new genre unto his name - The Eddie Murphy Movie had arrived.

Beverly Hills Cop II is the Eddie Murphy Movie exemplar. To pull from Roger Ebert’s one-star review, the fundamental difference is that now “Murphy is funny by definition.” Instead of writing jokes for him, the comedian is unleashed upon scenes and expected to spin gold from straw. This Rumpelstiltskin approach means the plot is, at best, an excuse and, at worst, incomprehensible. Fortunately, the producers hired the late, great Tony Scott to direct, hot off their last hit, Top Gun. Nobody alive or dead could make ‘80s excess look better. The mirrored shades and spray-tan sunsets were enough to keep all but the most discerning minds off the hows and whys and make Beverly Hills Cop II the third-highest-grossing movie of 1987.

It was also enough to make Beverly Hills Cop III inevitable, if not quite fast-tracked.

Pitches came and went. In one, Axel would’ve finally bitten the bullet and moved to California as the head of security for a Japanese-owned movie studio. In another, seemingly the closest to a greenlight, he would’ve ended up in London, matching wits with a local cop played by either John Cleese or Sean Connery. Not that the star was especially enthused about any of them. In a 1989 interview with Rolling Stone, he cleared up any confusion on that: “The only reason to do a Cop III is to beat the bank.”

By the time Paramount got serious in 1991, Bruckheimer and Simpson got better deals at Disney. At Murphy’s suggestion, screenwriter Steven E. de Souza and producer Joel Silver of recent Die Hard fame took over. Silver gave de Souza a week to come up with an idea. He found one in a New York Times article that took aim at Universal Studios Hollywood’s planned CityWalk expansion.

It struck him funny, seeing such high-minded cultural scorn lobbed at a combination shopping mall-tourist attraction. After two trips to Beverly Hills, Axel wasn’t much of an outsider anymore, but Southern California’s hallowed and hyper-sanitized theme parks seemed like a bubble he could still burst.

Detroit’s wiliest cop was headed to Wonder World. Knott’s Berry Farm, the production’s first choice to double for the fictional park, politely declined. Lucky enough, Paramount had just bought their own chain of theme parks, including Great America a mere five hours north of Los Angeles. It was an easy call and, more importantly, a cheap one.

The Eddie Murphy business wasn’t what it used to be. His first-ever non-Paramount movie, The Distinguished Gentleman, didn’t break even at the box office. As the budget for Beverly Hills Cop III climbed perilously toward $70 million, the studio called an audible. They wanted the overdue sequel done in six months for an August 1993 release at no more than $55 million. When protests that tentpole releases took no less than nine months to put together fell on deaf ears, Joel Silver walked.

Paramount delayed the project a full year, hoping to wring some loose change out of the script. The producing team behind the studio’s blockbuster Tom Clancy adaptations, Mace Neufeld and Robert Rehme, took over in the meantime. Still, the outlook was grim - director John Landis told crew members to take other work if they could find it.

Landis himself, on the other hand, didn’t have much other work to take.

By 1993, the director was famous for two things - ‘80s comedies featuring Saturday Night Live stars and The Twilight Zone disaster that claimed three lives, including two illegally hired child actors, on his set.

His career likely wouldn’t have lasted even that long without Eddie Murphy, who worked with him on Trading Places and asked the studio to bring him back for Coming to America. By Landis’s account, he worked with a very different Murphy on each. On Trading Places, he was still young and hungry. On Coming to America, he had nothing left to prove. Landis gave Murphy hell for refusing to testify on his behalf in the Twilight Zone trials. Murphy got Landis in a headlock for failing to appreciate his continued employment. Though the film was a success, both parties agreed to steer far clear of each other.

Murphy, on the other hand, didn’t intend on bringing the same Axel Foley period.

In the DVD featurette, Triple Axel, likely the only behind-the-scenes material that will ever be made for the film, Eddie Murphy explains why he liked the de Souza script in five small words: “Axel was a man now.”

They might as well be a death knell. From various reports of those on set, Landis and actor Bronson Pinchot among them, Murphy was in a dark place during Beverly Hills Cop III. He’d been going to the movies. Wesley Snipes was proving himself as an action star. Denzel Washington was proving himself as a dramatic force. And here was 33-year-old Eddie Murphy recycling his greatest hits a full decade after he first played them. He saw Cop III, for better and ultimately worse, as his chance to prove himself both.

You can see the sidestep in real-time. When Foley finds himself pitted against theme park customer service, he just...gives in. No fake name, no caused scene. He buys a ticket and walks in like the rest of us. Once immersed in the land of big heads and singing cartoons, he couldn’t be more comfortable with it. Instead of taking bites out of So-Cal’s last sacred cow, Beverly Hills Cop III is just a lesser Die Hard knock-off that happens to take place in a theme park. Even the four-letter words, the only reason it earned an R, feel tailormade for network dubbing.