Busch Gardens Tampa Bay’s Halloween event, though a premier event in its own right, has lived in the shadows of its competitor just down I-4 for 20 years. Beginning in 1999 as the more family-friendly Spooky Safari, Howl-O-Scream has grown immensely in both reputation and production over these past decades. Despite its indisputably inspiring scare zones, houses, and prime lineup of coasters, Howl-O-Scream has lived comfortably in the shadows of Universal Orlando’s Halloween Horror Nights.

Howl-O-Scream has always been the silver medal of Florida Halloween events, the underdog that, even though striving and innovation, could never quite live up to its more highly-funded, highly-regarded, and highly-attended competitor. Halloween Horror Nights has scored the title of “Best Halloween Event” from Amusement Today’s Golden Ticket Awards for 12 consecutive years, and has only grown to be more crowded and more talked-about in its 30 years of life. Howl-O-Scream has grown as well, but not nearly as exponentially. When given the choice between Halloween Horror Nights and Howl-O-Scream, more parkgoers—both locals and tourists—picked the former.

But that choice was stripped away in 2020 when, in light of the COVID-19 pandemic, Universal Orlando announced that their Halloween event would be postponing its 30th season until 2021. Focusing on tight safety protocols, Universal has chosen to focus on its daytime guests, utilizing its off hours to sanitize and prep the park for the following day. Although this was an understandable choice of the behemoth park, it was a major blow to lovers of the event.

Halloween lovers are not left without an alternative, though, as Howl-O-Scream announced that they’d be open for “18 horrifying nights” with an emphasis on utilizing its 335 acres to promote social distancing and 10 open-air scare zones. And so disappointed Halloween Horror Nights enthusiasts, perhaps for the first time, considered the competition.

The Case for Howl-O-Scream

Howl-O-Scream has undergone many changes since its 1999 inception as Spooky Safari. The family event was scrapped the following year and replaced with an event that looks a lot more like the Howl-O-Scream we know today: scare zones, houses, shows, and late-night ride time. Similar to Jack and Chance at Halloween Horror Nights, Howl-O-Scream has its own icons like Dr. Livingsdoom, the evil scientist and guide of the haunted trail since 2000. This year, Dr. Livingsdoom can be spotted in the First Fear scare zone adjacent to the park’s entrance. 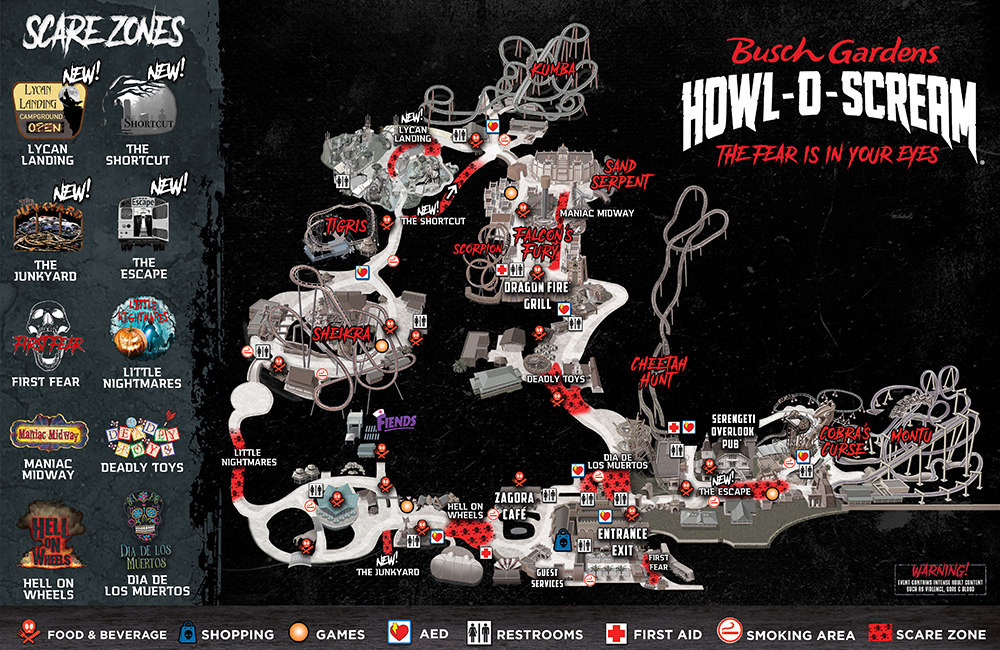 This year’s emphasis on scare zones comes with the inclusion of 4 brand-new zones: Lycan Landing, at the back of the park near Kumba, The Shortcut, a traditional graveyard-style zone, The Junkyard, a zone found near the upcoming Iron Gwazi that’s reminiscent of Texas Chainsaw Massacre, and The Escape, which is stationed in front of the Serengeti Overlook Pub.

I have not been quiet about my belief that Busch Gardens Tampa boasts the best coaster lineup in Florida—and that “belief” might just become fact once Iron Gwazi finally opens in the Spring—so scoring night rides on three classic B&Ms and a Schwarzkopf, a tight-turning Intamin, well-themed Mack, and a brand-new Premier Rides Sky Rocket II is a luxury for any enthusiast. Think of a coaster like Cheetah Hunt, which bolts around and through the park’s expansive land and animal enclosure, in the pitch black of October in Florida, when even the moonlight is shrouded by cloud cover. Those tight S-bends and LSM launches seem to pull more Gs in the nighttime, and this ride, which is usually a 7/10 in my personal ranking, is a solid 9 or 10.

The rest of the coasters are no exception: SkeiKra’s vertical drops feel steeper, Tigris’s heartland roll and non-inverting loop more stomach-dropping. The park takes on a different personality at night, even apart from the 10 scare zones, and the coaster become as daunting as they may have looked to you in your youth.

Even if you’re not a horror fan, getting to be in the park after closing, all the way until midnight on Fridays and Saturdays, is a dream for anyone who loves coasters, amusement parks, or Busch Gardens specifically.