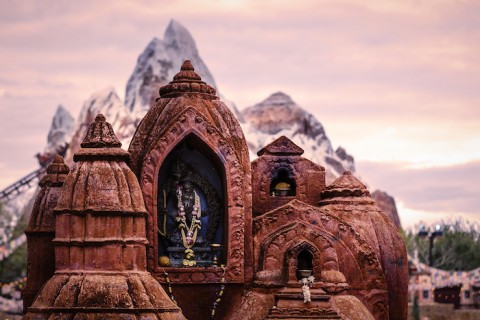 The story of theme parks in the 21st century is about to be a weird one... We may only be 20% of the way through the first century of the 2000s, but we've already lived through some of the wildest swings of the pendulum in themed entertainment design ever. Theme parks began in a lowly position as the tail end of Eisner's budget-conscious '90s and early 2000s lead to an era of underbuilt, abandoned, and low-budget plans, made all the worse by the 2001 obliteration of tourism in the wake of September 11th and, further, the financial crisis of 2008. Budgets were slashed. Theme parks cancelled. Projects downsized.

Arguably, that trend was reversed only by the opening of the Wizarding World in 2009, propelling Universal (and by extension, Disney) into the modern age of "living lands," big-budget investment, per-capita spending records, and theme parks as corporate revenue-generators... Who would've foreseen an era where E-Tickets weren't enough? Where competitors battled over blockbuster IPs? Where guests would queue for hours not for rides, but for food and shops? Where Disney and Universal would drop a billion dollars on a single land? Of course, this golden age of investment is itself coming to an unceremonious end thanks to the catastrophic fallout of the 2020 COVID-19 pandemic, the results of which will no doubt be felt in the parks for decades.

So now, today, we find ourselves in an unusual position: half celebrational, half mournful, 2020 seems like a good time to look back at what may have represented the height of Imagineering; the pinnacle of theme park spending; the biggest $200 million E-Tickets we'll see for a while. Last month, we took a half-hearted look at what we think are the "Worst" Disney Attractions of the Century (So Far). Today, we'll flip the script and look at the best to come out of Disney (and Universal) Parks so far in the 21st century – that is, opening in the year 2000 or later. (So no, Indiana Jones Adventure, The Amazing Adventures of Spider-Man, and the Twilight Zone Tower of Terror won't be on this list... though you can read up on each in our Modern Marvels collection!) Agree? Disagree? Does our countdown need a shift? Share your thoughts in the comments below or when you share this feature with friends!

For Disney fans, it's practically impossible to discuss any opening day attraction at Disney California Adventure without placing an asterisk at the end. After all, when the park opened in 2001, it had practically nothing for families, zero Disney characters, and almost no standout attractions... almost. While we traced the almost-unbelievable story of the park's original form in its own Disney's California Misadventure mini-series, the park did have one single, incontrovertilble hit.

Having practically invented the theme park simulator with 1987's Lost Legend: STAR TOURS, Imagineers had spent decades making them more thrilling, wilder, and rougher. 2001's Soarin' Over California was a breath of fresh air... It reinvented the capabilities of simulators by instead emphasizing the beauty, grace, and wonder the technology was capable of. Fusing an incredible new ride system, film, music, scent, and a particularly beloved pre-show, the ride wasn't just California Adventure's single, soaring success... it spread Around the World. First, the technology has made its way to Orlando, Shanghai, and Tokyo in the two decades since. Plus, a dozen manufacturers now offer "knock-off" hang-gliding simulators to populate amusement parks, malls, and museums. But none of the follow-ups – including the Disney-produced Soarin' Around the World "upgrade" – come anywhere close to matching the ease and simplicity of the Lost Legend: Soarin' Over California.

Honestly, it's not every decade that Disney Imagineers legitimately invent a whole new ride system. Soarin' did that. Though the original ride film may be retired (for now), it remains one of the best Disney attractions to have ever existed, and certainly among the best rides of this millennium (so far).

It's not every year – or even every decade – that Disney Imagineers introduce a new "mountain" to their range. So when Disney's Animal Kingdom christened its own, one-of-a-kind mountain, a whole lot was riding on it. After all, standing among Disney's Peaks of Imagineering and blending into the deeply-layered, story-focused, and culturally-reverent Animal Kingdom would require a world-class attraction. Luckily, Expedition Everest is that. The ride was a game-changer for Disney World; a 21st century return to form after a few too many years of cheap character overlays, unfortunately-underdeveloped parks, and cheap-and-cheerful attractions galore.

As with most of the other Disney "Mountains," Everest is really just a steel roller coaster made so much more by the physical world Imagineers built around it. Boarding reclaimed trains for a shortcut pass through the Himalayas' "Forbidden Mountain," the ride races foward and backward through Tibetan plateaus, icy chasms, and the darkness of the mountain's tunnels. The ride is so spectacular, in fact, that we dedicated an entire Modern Marvels: Expedition Everest feature to the legends and lore of the peak, the ride itself, and the mysterious mountain guardian said to reside within...

Speaking of which, while the ride's iconic Yeti is infamously frozen himself, the spectacular ride still remains among Disney's best. Designed with all the care and love you'd expect of a product of Joe Rohde, the ride feels like a piece so integral to the park, it's hard to imagine a time before it. It is, without a doubt, the perfect mountain for Animal Kingdom, and an amazing way to incorporate long-promised "imagined" creatures into its lineup of myths and stories.

There's no doubt that for many, the inclusion of Hagrid's Motorbike Adventure on this list could be a sticking point. For one thing, it's true that for all the pomp and circumstance riders have shared after their experience, the ride is "just" a steel roller coaster – only barely diguised and moderately decorated. Another strike against it? Frankly, it doesn't work well. Eighteen months in, the ultra-complex ride and its many moving parts (courtesy of cutting-edge, but admittedly unreliable ride manufacturer Intamin) still seems closed more than open. If fifteen hour waits on day one weren't enough, the de facto headliner of the Universal Orlando Resort is known to go entire days without opening at all and infamously strands guests into multi-hour waits during breakdowns.

Yet for all the mess behind the scenes, the tooth-gritting frustration, and the nervous energy surrounding the ride, exiting guests tend to have one reaction: sheer, unbridled joy. Seated in motorbikes or sidecars, riders effortlessly zip through forests, plunge into darkness, and dive through an abandoned abbey deep in the Forbidden Forest outside Hogwarts. This terrain-hugging, twisting family coaster packs enough surprises (spoiler alert: including a world record seven launches, a hidden weightless stall and backwards drop, animatronics, and a concealed freefall drop track) to leave folks flabbergasted. And frankly, it's just an absolute joy from start to finish.

The ride has recieved (no pun intended) universal acclaim from all who've made their way aboard. Some even call it the best ride in Orlando... That's a whole lot to place on the shoulders of an outdoor, bare steel coaster, but more power to you if you agree. Reasonably, we think it's fair to place this ride on our best of the century because it feels so right in the Wizarding World, and accomplishes so much in such a balanced way. Equal parts fun and thrilling, Universal managed to pull off a truly spectacular attraction (without a screen in sight, mind you!) and we suspect that once its reliability is up, Hagrid's will settle nicely into being one of the resort's most incredible attractions ever.