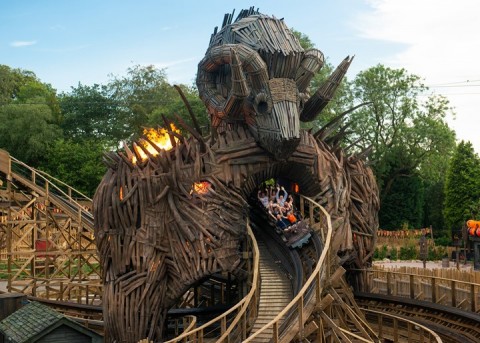 Halloween season seems to be synonymous with theme parks in my mind. Maybe it’s because this is the first year I’ve missed Universal’s Halloween Horror Nights since I was 12, or maybe it’s because October is the first time Floridians get a glimpse—just a glimpse—of Fall. Either way, every time I go to a theme park in a different season, something just feels off without the pumpkins in the trees and the slightest chill in the air.

So how do we cope in the eleven months that aren’t October? By finding attractions—roller coasters, namely—that center around a horror theme. That’s why I’m bringing you 5 horror-themed coasters that serve thrills and chills year-round.

I have to start with a few honorable mentions. First and foremost there is The Walking Dead - The Ride at Thorpe Park. Though this coaster’s history and ride experience are deserving of their own list, apart from theming this is little more than a family coaster. Therefore, it just didn’t make the cut for our top five.

Other year-round attractions haven’t quite qualified for the main six because they’re either (a) not roller coasters or (b) not real. The list includes, but is not limited to: Darren Brown’s Ghost Train at Thorpe Park, The Fiery Fist O’ Pain from Sponge-Bob, the spooky (if not disappointing) Shed on Kings Island’s Mystic Timbers, Fuji-Q Highland’s Super Scary Labyrinth of Fear, the queue line (just the queue line) of Skull Island: Reign of Kong, and the CGI/Arrow looper of death from Final Destination 3. Now (deep breath) let’s get started, in no particular order.

The Smiler at Alton Towers

The Smiler, a Gerstlauer Infinity Coaster that is high, high up on my coaster bucket list, is located at Alton Towers in the UK. (You’ll notice that a lot of coasters on this list are found at Merlin parks, as they have a bent toward the creepy and absurd.) This coaster boasts two lit hills, nearly 4,000 feet of track, and fourteen inversion, the most in the world as of late 2020 (and no successor is in sight). The ride opened in 2013 and is themed around the Ministry of Joy, a secret organization that carries out a process called “Marmalisation” on subjects who have lost their smile. But, as all fictional super-secret organizations do, things got creepy fast. Guests at Alton Towers can climb aboard the Gerstaluer 16-seater trains to be Marmalised.

The thing about The Smiler that gets under my skin, the thing that makes it perhaps the most unsettling ride on this list, is the fact that it is not based on any intellectual property or preexisting story. This theme and experience was completely birthed out of Alton Towers, a creative team with an eerily expansive imagination.

Revenge of the Mummy at Universal Parks

The ride centers around a fictional set for the aforementioned film series, where the movie’s curses and misgivings are hitting a little too close to home for the cast and crew. Guests are told to “look for the medjai symbol” in a speech that is all-too quotable for Universal frequenters, and are then plunged into darkness and into the hands of the mummy.

This coaster, in thrills and chills, is on the tamer side compared to some other rides on this list, with only 2,200 feet of track and never exceeding 40 miles per hour. Still, there’s something about it, whether it be nostalgia or charm, that keeps me and many others running back to it again and again.

Saw - The Ride at Thorpe Park

Saw - The Ride has been operating at Thorpe Park, another Merlin endeavor, since March of 2009. The second and final Gerstlauer on this list, this coaster is based off of Jigsaw’s long-standing Saw franchise. This coaster, unlike the Smiler, is a Euro-Fighter model, which is significantly smaller but no less exciting than its big brother, the Infinity coaster. Euro-Fighters feature smaller trains (Saw’s trains only holding eight guests at a time), but are therefore able to navigate tighter twist, turns, and inversions.

After a harrowing queue line and beyond-vertical drop, guests will face an array of near-miss elements, each one themed after one of Jigsaw’s twisted games. Perhaps the most famous of these elements is the row of rotating and razor-shop metal wheels that sit at the bottom of the ride’s first drop. Needless to say, this attraction is not for the faint of heart.