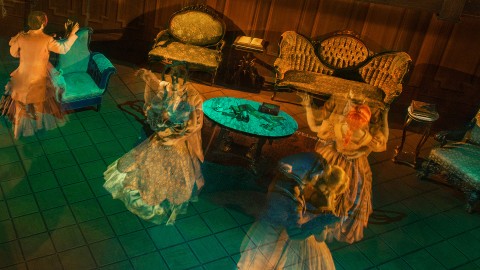 "Here you leave today and enter the worlds of yesterday, tomorrow, and fantasy." And while you're in them, you've got to eat, right? From the very beginning, dining at Disney Parks has been more than just part of the experience; it's been part of the story. When you eat hand-pulled taffy on Main Street, indulge in a Dole Whip beneath the torches of Adventureland, pop a beignet and mint julep on the wrought iron patios of New Orleans Square, or saddle up for some barbecue in Frontierland, you're seeing Disney's culinary imagination at work.

And in many regards, considering dining as part of the story was fully fulfilled in 1967, when Pirates of the Caribbean opened at Disneyland. There, as guests cast off from Lafayette's Landing, they encounter one of the ride's most ingenious moments. Drifting at first beneath the cloudless night sky and alongside firefly-lit marshes, guests suddenly find the swamp's still waters illuminated by the reflection of paper lanterns strung up over the waterside patio of a stately, remote plantation house on the bayou's edge. It's alive with subtle jazz music... and waterfront diners. But they aren't Audio-Animatronics; the hustle and bustle of the ongoing evening dinner party is real thanks to diners at Disneyland's most exclusive public restaurant, The Blue Bayou.

The Blue Bayou gave guests the opportunity to dine inside a ride, beneath perpetual night skies as silent boats sail by in the darkness. It wasn't just novel; it was magical both for riders and diners. Arguably, Disney's never topped that initial, perfect fusion of ride-and-restaurant (though both Paris and Shanghai's Pirate rides have followed the formula). Hints of the formula have popped up, like in Magic Kingdom's Village Haus (overlooking "it's a small world's" boarding) and, at Epcot, The Land's Good Turn Restaurant (with views of Listen to the Land), the San Angel Inn (which closely mirrored the Blue Bayou with Mexico's El Rio Del Tiempo waterway), and The Seas' Coral Reef Restaurant.

But the idea of truly placing a restaurant within (or at least, in proximity to) a ride hasn't really happened in quite a while... Which is why we've cooked up some ideas for ride-restaurant pairs that would be amazing to dine in. Are these spatially possible? Practical? Of course not! Consider this more of a conceptually exercise than a concrete one. But if you can join us in temporarily forgetting space constraints, ignoring blueprints, and thinking Blue Sky, consider how great these dining experiences would be...

6. The Ghostly Ballroom inside Haunted Mansion

One of the earliest concepts for the Haunted Mansion was drafted by Disney Legend Rolly Crump, who proposed a tour of international oddities, eerie and otherworldly effects, and downright unsettling sights. (We looked into the concepts of his so-called "Museum of the Weird" concept in our in-depth look at the ride that eventually ran with the idea – the Modern Marvel: Mystic Manor.)

Walt liked Crump's "Museum of the Weird" but apparently suggested that maybe it ought to be set aside and used for an in-ride restaurant, like the Blue Bayou that was then under development for Pirates. And we could imagine a living restaurant of strange props and ghostly artifacts as its own restaurant, even if it doesn't quite jive with the eventual tone of the Haunted Mansion. After all, the "Museum of the Weird" concept was long before the ride had adopted its final scenes, its story (or lack thereof), or even the Omnimover ride system.

Even today, though, there's one dream shared by many Disney Parks guests: dining in the manor's Ballroom. Of course, it's neither possible nor practical. But imagine for a moment if the ride had indeed been set up to feature its own Blue Bayou equivalent ride at the ride's peak. Imagine if Madame Leota was truly speaking to you when she offered "your presence is wanted at this ghostly ball." Imagine being led by ghastly hostess down supernaturally stretched hallways, emerging at last in the Ballroom to partake in an eternal wedding feast with ghostly deserts aplenty. Yes, the haunted equivalent of "Be Our Guest Restaurant" would be the hottest ticket in town to this day... But wait...

Imagine if you had a choice: dine in the soaring Ballroom itself... or step onto the other side of that massive pane of glass and into the Regions Beyond. While it may not be as pretty, dining in this one-story black box would have its benefits: with rising and falling lights aimed at your table, you – yes, you – would appear to the Omnimovers processing along the balcony above to be a spectre, humming in and out of existance at a paired Ballroom table using that spectacular Pepper's Ghost effect that's powered the party for decades. Where else can you dine dead?

When Disney's Animal Kingdom opened in 1998, its headlining anchor attraction was Kilimanjaro Safaris; about as "true-life" as any Disney Parks adventure has really been. Driving across an African serengeti that's literally the size of Magic Kingdom, aspects of the ride have changed many times as Disney balances guests' desire for "adventure" and "story" and "special effects" with the ride's true star: the animals! The ability to see African animals up close (and in as close to their native habitats as is practical for many of us) made Kilimanjaro Safaris a hit... and, soon after, made the Animal Kingdom Lodge's Savannah Views worth $800 a night). Disney's definitely figured out how to monetize giraffes, zebras, and lions. But they're missing one thing.

In fact, they need only look down the street to Busch Gardens Tampa Bay, which has its own serengeti (once traversible by safari ride; now just by train and skyride). There, for more than fifty years, the park's signature restaurant has been so because of its views across the animal exhibit. Beginning as the standalone, public, beloved Tampa restaurant the Old Swiss House before being absorbed into the park's footprint and African setting as the Crown Colony House (and since 2016, the less problematic Serengeti Overlook Restaurant and Pub), the eatery has all the makings of once-in-a-lifetime dining.

Imagineers would have their work cut out for them in addressing the inherently worrisome aspects of a Harambe House, though. After all, such ornate safari-side clubhouses are predictably problematic, having historically been erected by colonizing British invaders to serve familiar fare to their own gentry while vacationing in Africa for hunting trips. Yikes. Of course, Imagineers have faced the challenge of how to address Africa and Asia's (and Pandora's) colonial past in the park before. From the Majarajah Jungle Trek to the Wildlife Express Train and Flight of Passage, Animal Kingdom's stories are of autonomous peoples who reuse and repurpose evidence of their past colonization. So could an old colony clubhouse be repurposed as a celebration of authentic African cuisine? You bet.

And imagine how exclusive and elite the restaurant would be if it were only accessible via the Wildlife Express train... Yep, if Rafiki's Planet Watch doesn't survive the decade, the train could be repurposed as a way for diners to access a far-flung clubhouse with a restaurant and pub set far off in the serengeti. Now that's a restaurant that would be fully booked every minute of every day.

What do Toy Story Land, Galaxy's Edge, Cars Land, and New Fantasyland all have in common? For one, none of them look exactly like the concept art Disney released before their opening. Unlike Universal (who tends to wait until projects are practically ready for opening before even acknowledging they exist), Imagineering art is distributed around the world early on in a project's lifetime. So early, in fact, that Disney is pretty notorious for then quietly, inconspicuously going back to edit the original art, airbrushing out the more expensive elements of a project that were dropped during later stages of concepting. Unfortunately, this gives Disney Parks fans the frustrating feeling of knowing what they didn't get.

From alien dinner clubs and Bantha rides on Batuu to toy barns and tunnels in Toy Story Land, fans can practically be haunted by "what never was." That's definitely true of Cars Land, too. Though it almost exactly matches the massive scale and scope originally planned, at least one thing is missing: a Cars-themed, West Coast version of Hollywood Studios' Sci-Fi Dine-In Theater. 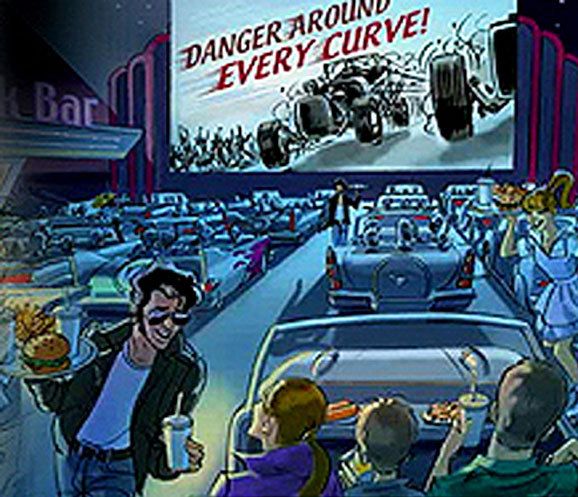 Likely conceived before the Modern Marvel: Radiator Springs Racers had taken on its final form, artwork of the experience showed '60s style servers fitting the "Car Land" concept that had come before. Today, a mural painted on the side of a building advertises the Drive-In, pointing toward where it doesn't exist.

Not only is there still space for this restaurant to be built – hidden alongside and behind the Cadillac Range – but it would still be a hit! Without a doubt, this drive-in restaurant will be California Adventure's "Be Our Guest;" a booked out, filled up character dining extravaganza where instead of meeting cars, you'd eat in them. It's perfect. That's why we listed signature dining like this to be among the 16 Disney World Exclusives That Should Make Disneyland Fans Jealous. While a Dine-In Theater wouldn't be physically inside Radiator Springs Racers, it would be the perfect companion for the ride.