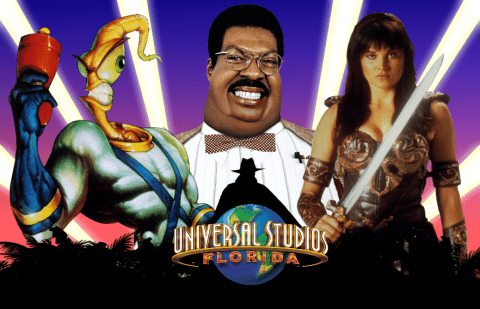 Since its opening day, Universal Studios Florida has promised all the fantasy, fame, and fun of a genuine Hollywood backlot. That includes the familiar faces strolling to and from their unseen trailers. Universal’s cast of usual suspects don’t earn the afternoon-long lines of Disney’s princesses and talking pets, but then again they’ve got their own lives to live. The official resort blog only gives away their natural habitats, not their schedules. Character interactions at Universal still come with an air of spontaneity. Customers waiting in line for popcorn bucket refills may be suddenly asked the time by Doc Brown. The Blues Brothers might honk their Bluesmobile at unwary passersby with their noses in park maps. Though the line-up of characters has changed more than a little since 1990, that spirit remains. As John Forsythe said in Experience the Magic of Movies, a 1991 videotape tailormade to sell the Universal difference, “You never know who you’re gonna meet here.” Here are six of the most elusive stars to ever grace the Studios.

There’s nothing more Hollywood than corporate synergy, and Universal Studios Florida has provided a living, breathing billboard for the company’s biggest blockbusters. The Flintstones, Casper, and Apollo 13 all received extensive walkthrough exhibits in Soundstage 22. The former MCA Recording Studio was replaced by a dedicated showroom called Stage 54, which featured everything from The Lost World: Jurassic Park to The Mummy.

But sometimes these tie-in promotions aren’t so grand, the movies not so successful. Sometimes, because of box office and general ambivalence, they’re not around long enough to make so much as a single home video appearance.

By the mid-‘90s, just about every major studio in Tinseltown had tried and failed to recreate the 1989 phenomenon of Tim Burton’s comic book opus. Disney alone tried and failed twice with Dick Tracy and The Rocketeer, both of which overwhelmed gift shops down the highway at the other backlot park.

Universal, though, had an ace up its sleeve. The Shadow wasn’t merely another cartoon crime-fighter that might sell as many lunchboxes as Batman; he was Batman before there was a Batman.

In 1930, The Detective Story Hour debuted as a radio supplement to the struggling Detective Story Magazine. It didn’t help sales much, but the program did mint an unexpected star - an enigmatic host called “The Shadow.” Acting fast, publisher Street & Smith hired professional editor and amateur magician Walter B. Gibson to translate nothing more than an eerie voice and an evocative name into an enduring character.

By the end of Gibson’s first year writing novel-length Shadow stories, demand forced the magazine to speed its publishing from quarterly to twice-monthly. By the end of the decade, the character was starring in his own radio show that would run for almost twenty years. Not long after The Shadow returned to the airwaves, Batman arrived in Detective Comics. The Bat’s vigilante tricks and nocturnal allure took obvious inspiration, which co-creator Bill Finger later admitted.

It only made sense, then, that The Shadow was the best challenger for the comic book movie throne. As such, not just any filmmaker was allowed to try their hand at the property. Universal’s Back to the Future golden boy Robert Zemeckis worked on an adaptation at the same time as Burton’s Batman, but nothing came of it. After that, Evil Dead auteur Sam Raimi approached the studio with his own take. Universal wouldn’t let him near it, instead offering to foot the much cheaper bill for his own original pulp hero. The resulting movie, 1990’s Darkman, made about as much as The Shadow would in 1994 for less than half its blockbuster budget.

That may be why the character was so strangely, if fittingly, hard to find at Universal Studios Florida. Posters for The Shadow adorned the usual soundstages, but the only account of the two-gun hero ever appearing in person comes from the man who played him - James Keaton, best known to the Halloween Horror Nights faithful as Jack the Clown.

Keaton has tweeted occasionally about his brief time in the slouch hat during July of 1994. A short preshow was added to Beetlejuice’s Graveyard Revue, in which The Shadow faced off against long-time nemesis Shiwan Khan. Both costumes were screen-used, still bearing the names of the actors who last wore them. For about a month after, The Shadow skulked around the alleys of the park’s New York sets, then vanished without a trace.

Minus Keaton’s own pictures of him in costume, at least. No other footage or photos of The Shadow or Shiwan have found their way online, if they survive on moldering VHS tapes and disposable cameras at all.

In something like poetic justice, Darkman made a bigger splash at Universal Studios Florida, starring in the Tramway of Doom overlay of Kongfrontation at the park’s first event to bear the name Halloween Horror Nights.

Not long after Back to the Future: The Ride opened in May of 1991, cartoon standees of the franchise’s heroes showed up beside Doc Brown’s time-traveling train. To the tourists, they were a photo-friendly reminder that Back to the Future: The Animated Series would be airing on CBS that fall. To the company, it was the dawn of a whole new era - the first show ever produced by Universal Cartoon Studios.

Now known as Universal Animation Studios, the division was founded primarily to produce spin-off cartoons based on the latest live-action hits. Back to the Future: The Animated Series reached audiences only a year after Back to the Future Part III. Fievel’s American Tails aired the same way after Fievel Goes West. Three different Saturday morning follow-ups to Jurassic Park were pitched and ultimately passed over. Later cartoons were based on franchises like Casper, Beethoven, and The Mummy.

Early on in its existence, before it became most famous for churning out direct-to-video Land Before Time sequels, Universal Cartoon Studios wanted a piece of the Console Wars. The Super Nintendo and Sega Genesis turned toy stores into Christmas-time warzones. Every kid had their blood-pact opinion on which was better and a bone-deep answer to that most impossible adolescent question: Mario or Sonic? Even when the controllers were put away, cartoon adaptations of both kept the fires burning. At his peak, Sonic the Hedgehog starred in two concurrently airing cartoon series.

With the heaviest hitters out of contention, Universal had to aim lower on the mascot roster at characters a little too new or a little too strange for prime time.

Earthworm Jim was both.

Developed as an excuse for Playmates Toys to replace their waning Teenage Mutant Ninja Turtles line, Earthworm Jim hit the Sega Genesis in October of 1994 and immediately established himself as a weirdo to watch. In the first stage, players had to launch a cow into orbit using a fridge and rudimentary catapult. In the second stage, players literally went to hell. At a time when the hottest video game characters were dripping with attitude, Jim oozed absurdism.

The next year, the game’s eclectic success scored a sequel and a TV show co-produced by Universal Cartoon Studios. It premiered in September of 1995, but the marketing blitz came fashionably late. In April 1996, four VHS tapes of collected episodes reached video stores, offering an exclusive mail-away action figure with two proofs of purchase. At the same time, Taco Bell dedicated a month of kids meal toys to the worm. Suped-up CD ports of the original game weren’t far behind.

Despite the push, a murderers’ row of vocal talent, and respectable marks from critics, Earthworm Jim only lasted two seasons on Kids’ WB.

However brief its run, from the end of 1995 to the end of 1996, it still aired long enough to warrant an Earthworm Jim meet-and-greet at Universal Studios Florida. There’s no official park media to go on, but unlike The Shadow, Jim does make the occasional home video appearance. Though he could’ve roamed like any other Universal character, the existing footage of Earthworm Jim places him outside Lucy: A Tribute. His appearance seems to have coincided with the rest of the summer 1996 hype.

Given the character’s bizarre proportions, the performer hid inside Jim’s hyper-muscled super suit and operated his static head like a puppet.

I remember meeting Earthworm Jim - I was a HUGE fan of the game series and the cartoon as a kid and was surprised - but elated - to see him as a meet and greet back then!